Two days ago I wrote about how some social-media folks had distorted an eight-minute remark by Steve Pinker made at the Spiked event at Harvard: “Is political correctness why Trump won?” Pinker spoke about how certain facts have been censored or deemed by the Left taboo to discuss, and how the suppression of truth in that manner simply drives people into the arms of the Right or the “alt-right” (whatever the “alt-right” is). If you listened to Pinker’s whole set of remarks, it was clear that he was against the alt-right and was calling for a degree of honesty by progressives that would not drive people rightward.

In my post, I showed how many people willfully distorted Pinker’s remarks to make him seem a fan of the alt-right, something that anybody with a few neurons could have discerned had they listened to the whole eight-minute talk. But people kept excerpting just the first part of the remarks, where Pinker adumbrates the truths and also remarked—unfortunately, in my view—that there are “highly literate and highly intelligent people” who gravitate to the alt-right. While that statement was unfortunate, I think it came from Pinker’s seeing the “alt-right” (as I used to) as meaning “the far right”. But that didn’t matter. His point was that the Left has to deal with the facts about society, and then put them in their proper context, showing, for instance, that even if on average different sexes or ethnic groups differ in behavior or interests, that doesn’t mean they should be treated unequally or discriminated against. When the Left fails to do that, it could indeed turn people towards the other pole of politics.

As if that wasn’t enough, I pointed out that Pinker was one of the Harvard faculty’s biggest donors to the Democratic Party, something that hardly comports with him being on the “alt-right.”

Nevertheless, many people, hungry to demolish Pinker for reasons that are multifarious and often obscure, simply ignored the totality of his remarks so they could demonize him.  This attempt to smear Pinker, a well-known liberal, is one of the most blatant examples of dishonesty I’ve seen coming from people who describe themselves as Lefties. Here are some of the first tweets from people recognizing and calling out the unwarranted demonization of Pinker:

Alt-Right: “The SJWs are always calling everyone Nazis, they’re so full of shit.”

*An SJW selectively edits a clip to make it seem, falsely, like Stephen Pinker is sympathetic to the Alt-Right*

"A lie can travel halfway around the world before the truth can get its boots on." pic.twitter.com/uJ11M7TQUg

The last tweet includes a number of other tweets, some by people we know, smearing Pinker. I’ll put in those screenshots: 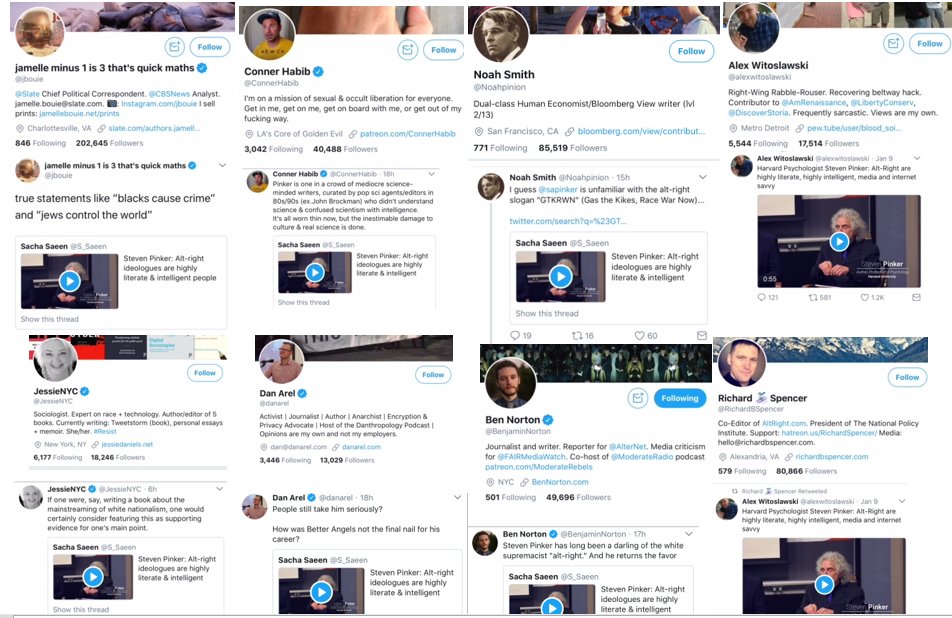 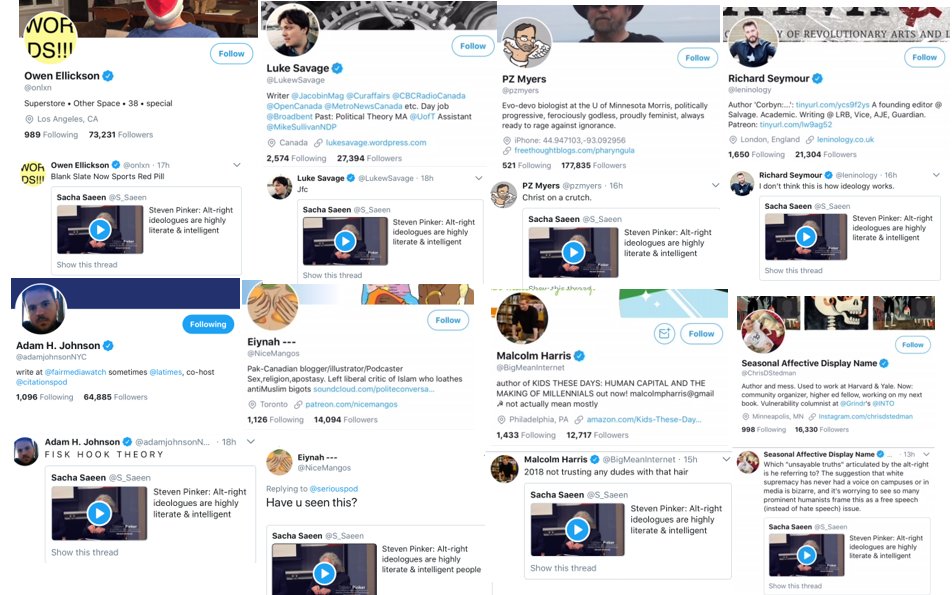 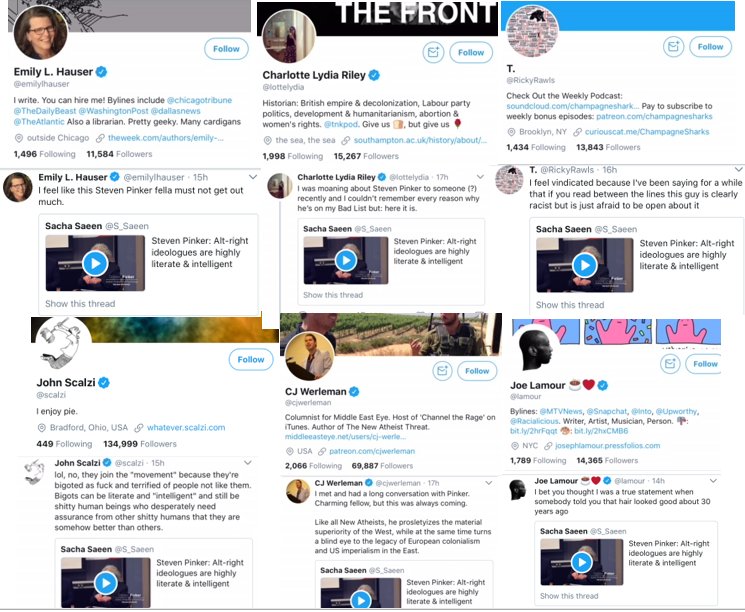 One of the first people to call out these distortions was writer Jesse Singal, who describes himself as “a Brooklyn-based journalist. I’m currently writing a book about social science, social justice, and the replication crisis for Farrar, Straus and Giroux (it’s due out…. not sure). I’m also a contributing writer at New York Magazine.  ” Here’s a tweet where Singal compares what Pinker actually said with how blogger P. Z. Myers characterized it:

Left is @pzmyers summing up Steven Pinker's argument. Right is an excerpt from Pinker's actual remarks.

This level of intellectual dishonesty drives me bananas. It makes us all so, so much stupider. This genuinely warrants a correction on Myers' part.https://t.co/8tkXvW2gFZ pic.twitter.com/dgNtVPb06R

Well, Singal wasn’t satisfied with responding on Twitter, and so he’s written a longer piece for today’s New York Times (link below), using Pinkergate as a symbol of the Internet’s inanity. (I’m not sure if it’s “making us dumber,” but it’s giving us the chance to show our true personalities: smart, dumb, honest, or duplicitous.)

You can read it for yourself (it’s not long), and I’ll just post a few excerpts:

The clip [of Pinker’s remarks] went viral. The right celebrated; the left fumed. The neo-Nazi Daily Stormer website ran an article headlined, in part, “Harvard Jew Professor Admits the Alt-Right Is Right About Everything.” A tweet of the video published by the self-described “Right-Wing Rabble-Rouser” Alex Witoslawski got hundreds of retweets, including one from the white-nationalist leader Richard Spencer.

“Steven Pinker has long been a darling of the white supremacist ‘alt-right,’” noted the lefty journalist Ben Norton. “And he returns the favor.” Others reacted to the rumor with simple exasperation: “Christ on a crutch,” said the liberal commentator and biologist PZ Myers, who also wrote a blog post denouncing Mr. Pinker for this supposed alliance.

The idea that Mr. Pinker, a liberal, Jewish psychology professor, is a fan of a racist, anti-Semitic online movement is absurd on its face, so it might be tempting to roll your eyes and dismiss this blowup as just another instance of social media doing what it does best: generating outrage.

But it’s actually a worthwhile episode to unpack, because it highlights a disturbing, worsening tendency in social media in which tribal allegiances are replacing shared empirical understandings of the world.

And here are some of Singal’s conclusions:

That’s because the pernicious social dynamics of these online spaces [JAC: Why have the dynamics of these spaces become so pernicious?] hammer home the idea that anyone who disagrees with you on any controversial subject, even a little bit, is incorrigibly dumb or evil or suspect. On a wide and expanding range of issues, there’s no such thing as good-faith disagreement.

. . . It’s getting harder and harder to talk about anything controversial online without every single utterance of an opinion immediately being caricatured by opportunistic outrage-mongers, at which point everyone, afraid to be caught exposed in the skirmish that’s about to break out, rushes for the safety of their ideological battlements, where they can safely scream out their righteousness in unison. In this case: “Steven Pinker said the alt-right is good! But the alt-right is bad! We must defend this principle!”

This is making us dumber.

As I said, I don’t agree that this is making us dumber. People like Myers are not dumb, and are no dumber than they were before they began engaging in such outrage-mongering. What social media is doing is making them more recalcitrant in their views, more tribalistic, less willing to listen to opposing views, and less willing to admit they were wrong. I’m not exactly sure why this is so, and perhaps readers can weigh in here. I suppose if you take a very strong and public stand, it’s a lot harder to back off or apologize if you are a public figure than if you’re simply someone talking personally to someone else. With social media, everyone is to some extent a public figure, which wasn’t true in the days when controversial figures like Mencken held the stage. But I’m still not satisfied with that explanation.

Even after realizing that these outrage mongers had been played by others—or by themselves—they continue to occupy their Faulty Towers, arguing for example, that Pinker is still a “useful idiot” to the alt-right or is “liked” by the alt-right. In this way they pretend to revise their views without really having done so. Here are a few examples of that:

I'm not saying Pinker is a fascist. I'm saying he's not a leftist. And the alt-right would find *a lot* to like in his work. Which clearly is a big problem for him.

Sacha Saeen, who was previously unknown to me, appears to be the person who started the fracas by posting a truncated video of Pinker’s remarks:

I’d comment further, but this is a family friendly site.

102 thoughts on “PinkerGate: The last word”