As I recall, I heard this on the NBC Evening News the other night, and again on National Public Radio this morning. It is a dreadful word:

Yes, some dictionaries have it, like Merriam Webster online, which defines it like this:  “having a forceful impact; producing a marked impression (impactful song lyrics, impactful humanitarian efforts)”

But seriously, does it sound good to say that “I found War and Peace to be a very impactful novel”, or “I heard Taylor Swift’s latest album that dropped today, and it was really impactful”? (There’s another bad word in there.) Is there any sentence in which that word sounds good?

Checking the online Oxford English Dictionary at the University of Chicago Library, my go-to source for words, I didn’t even find the goddam word: 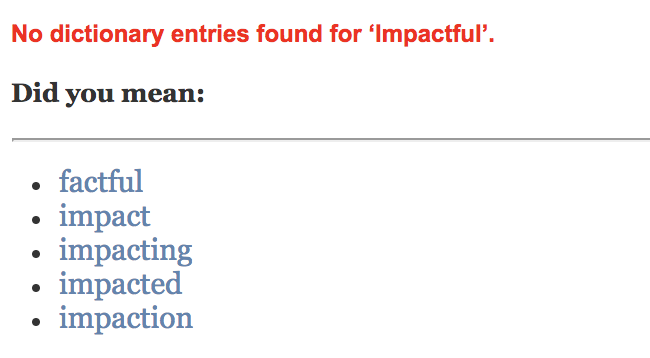 It’s time to ditch this odious bit of English, chucking it in the bin with “grow” as a transitive verb not referring to plants, and “at that point in time” as a replacement for “at that time” or “then”.

136 thoughts on “Another word I hate”