Among the venues becoming Authoritarian Leftist (actually, it’s been largely like that for a while) is Vice News, which now cements its ideology with an article called “Hoop earrings are my culture, not your trend.” It’s written by “Anonymous author,” which shows both the cowardice of taking this risible stand, but also the willingness of a supposedly respectable news site to refuse to divulge who writes their pieces.  What kind of journalism is that? This is not a leak from an anonymous source like Deep Throat. (As we’ll see below, the author has been identified.)

Anonymous, however, makes this argument. She could have stopped after the first sentence.

In the grand scheme of things, hoop earrings may seem insignificant. But seeing white women wearing them is unnerving. White girls did not start the “trend” of over-sized hoop earrings and yet they’re the ones being praised for donning the “edgy” style. Meanwhile, women of colour who wear them face racial stereotypes or the assumption that they’re participating in a disposable trend. Last month,Vogue declared up-dos and gold hoops to be the ultimate summer pairing. They credited a bunch of mainly white models with starting the trend and even proclaimed that “bigger is better.” Never has that been the case when it comes to women of colour wearing over-sized gold hoops. A style that links so heavily with identity is not taken seriously until it is seen on a white woman.

I’m not sure what it means to “be taken seriously until it is seen on a white women”. Another interpretation would be “the fashion industry just noticed that hoop earrings look cool, and have declared it a ‘thing‘.” That has nothing to do with the marginalization of women of color, only that there has to be a time when some appealing aspect of culture gets noticed and touted if it’s to spread to other cultures. After all, there was a time, long ago, when Chinese restaurants didn’t really exist as places for Americans to eat. Did their new popularity reflect that fact that their growth meant that they were finally taken seriously by white people? That’s one way of looking at it, I suppose, but it has nothing to do with the denigration of Asians. It has to do with finally noticing that Chinese food happens to be good! (I am a creditable Szechuan cook; does that make me extra guilty?)

The anonymous author goes on:

Earlier this year in the US, three latina students painted a mural urging their white classmates to take off their hoops. White confusion ran rampant, prompting one of the creators to explain that “This is about how women of colour can’t wear their own style and culture because they are looked down upon when they do so… But on the other hand, white females are allowed to appropriate the fashion when it is beneficial to them or makes them look edgy.”

I do try to keep my ear to the ground, but I’m unaware of black women or Latinas have been denigrated a lot for wearing hoop earrings. In fact, I’ve never heard of a single instance. Was that some kind of bigotry that I missed?

Actually, as The Claremont Independent reports, what was  painted was not really a “mural” but graffiti created by three Latina students at Pitzer College in California. Here it is: 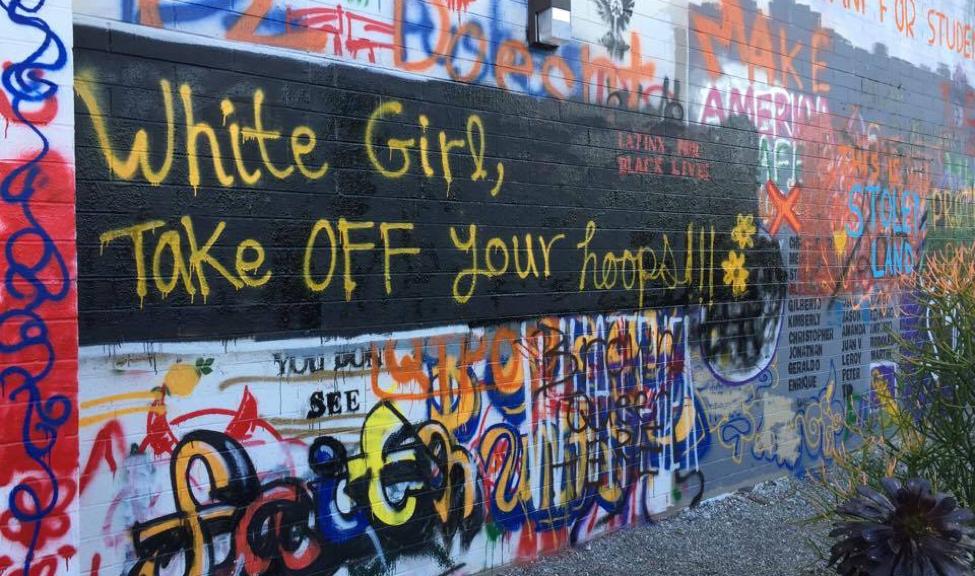 One of the “artists,” a student at Pitzker College, notes that these earrings, and other decorations, are “symbols of resistance” that cannot be appropriated:

“[T]he art was created by myself and a few other WOC [women of color] after being tired and annoyed with the reoccuring [sic] theme of white women appropriating styles … that belong to the black and brown folks who created the culture. The culture actually comes from a historical background of oppression and exclusion. The black and brown bodies who typically wear hooped earrings, (and other accessories like winged eyeliner, gold name plate necklaces, etc) are typically viewed as ghetto, and are not taken seriously by others in their daily lives. Because of this, I see our winged eyeliner, lined lips, and big hoop earrings serving as symbols [and] as an everyday act of resistance, especially here at the Claremont Colleges. Meanwhile we wonder, why should white girls be able to take part in this culture (wearing hoop earrings just being one case of it) and be seen as cute/aesthetic/ethnic. White people have actually exploited the culture and made it into fashion.”

This issue was also taken up by the Independent (is that place going downhill, too?) in the following article (click on screenshot to go there), which identifies the Vice writer as Ruby Pivet, a Latina writer. How did they find out? 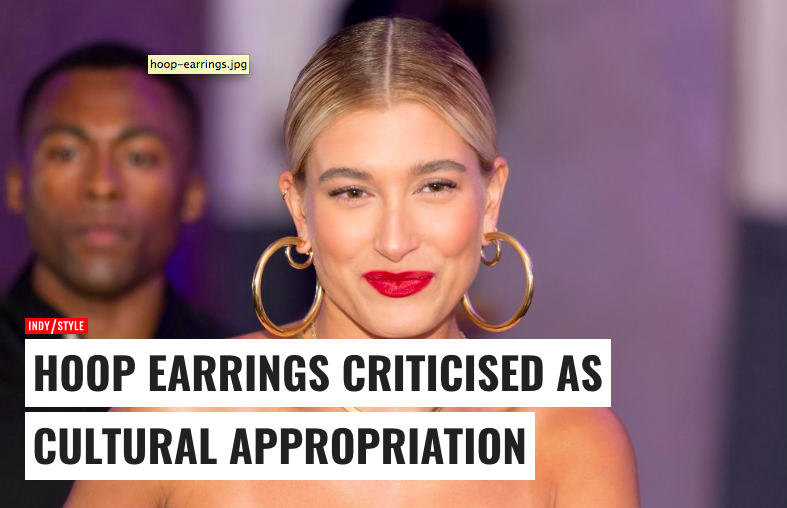 The Independent basically regurgitates the Vice piece, so you don’t need to read it. But when did reporting at a place like the Independent consist on pointing at and regurgitating an article from another news source?

At any rate, I seriously doubt that hoop earrings were originally worn as “symbols of resistance”: they are only declared so post facto to prevent others from wearing them. 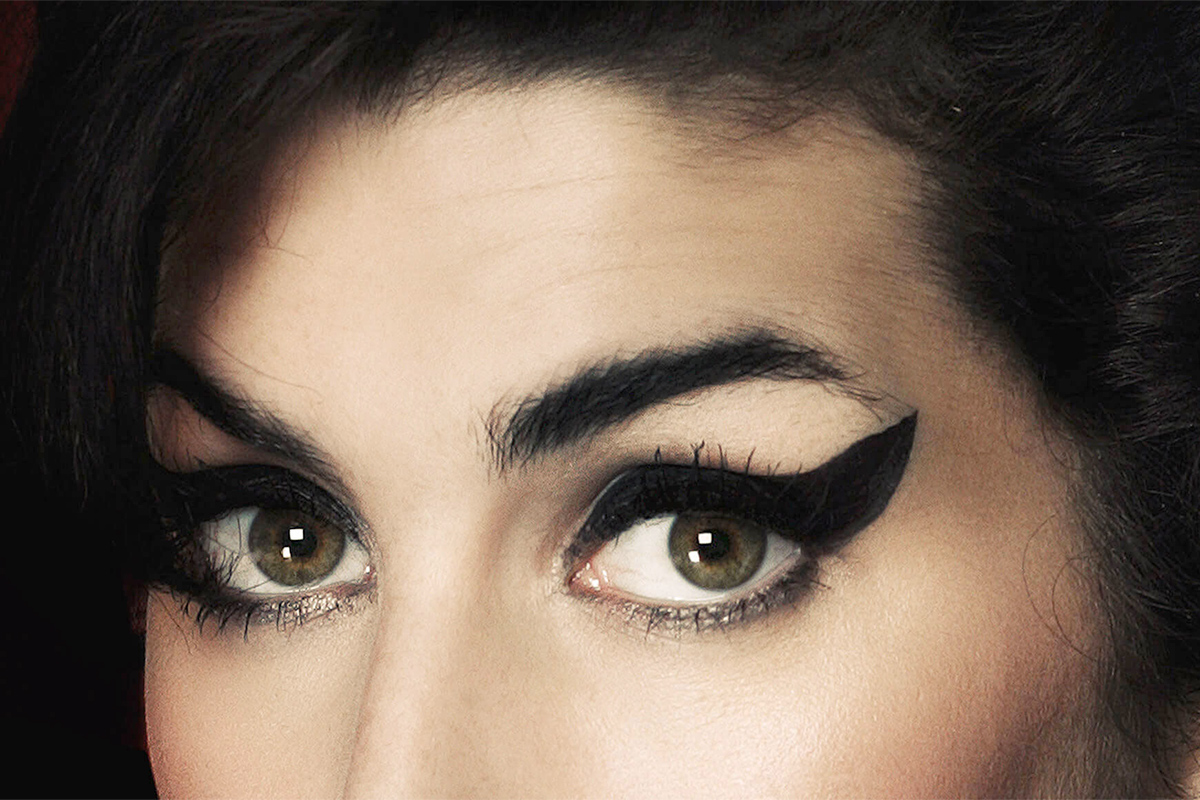 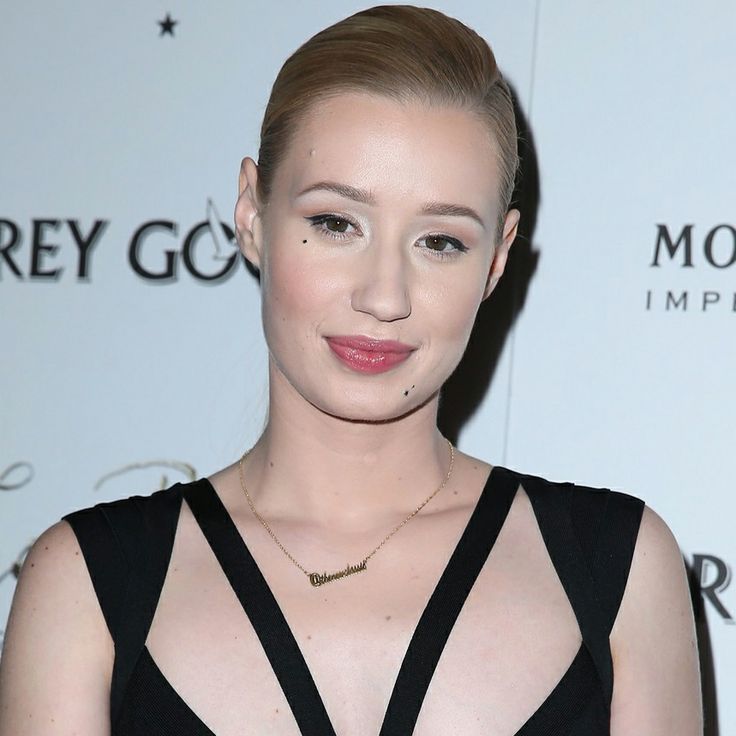 There are too many white women with lined lips to show, but, as the ultimate cultural appropriator of hoop earrings—who in fact has made them part of her image—I submit this for your disapproval:

Now here we have a real dilemma: which woman of color dares to call out Anita Sarkeeian for culturally appropriating their symbol-of-resistance jewelry? Or will Sarkeesian simply admit her ideological misstep and stop wearing her hoops?

But—as with dreadlocks—hoop earrings, while they may have been adopted by Latinas, have also been adopted over the course of history by many groups. WUSA-9, a CBS station and site, says this:

So what is the origin of the hoop earring?

There is no pinpointing who was the first to rock [JAC: please excuse the preceding infelicity] a pair of hoop earrings, but the popular jewelry piece can be traced back to Ashurnasirpal II, King of Assyria (884-859 BCE), according to the Cultural Encyclopedia of the Body.

There is a depiction of the king wearing thick hoop earrings in a palace in the ancient city of Nimrud, which is modern day Iraq.

Hoop earrings were evident in the major cultures of the ancient world including with the Greeks and Romans.

Pirates and sailors also often wore gold hoop earrings. Seaman often wore the earrings as a mark of their travels, according to LiveScience.

Pirates also used hoop earrings for superstitious reasons since it was believed the metals in an earring contained magic healing powers. Others believed the earrings would keep them from drowning or sea sickness.

When a seaman died, the earring would pay for their funerals or to pay for their bodies to go back home. Pirates would even dangle wax from their earring to use as ear plugs for when firing cannons.

Even Wikipedia backs that up:

Ear piercing is one of the oldest known forms of body modification, with artistic and written references from cultures around the world dating back to early history. Gold, Silver and Bronze hoop earrings were prevalent in the Minoan Civilization (2000–1600 BCE) and examples can be seen on frescoes on the Aegean island of Santorini, Greece.

Did Latinas themselves culturally appropriate hoop earrings from ancient Greeks and Minoans? Who cares? As you know, I object to cultural appropriation only in the rare instances where it actually damages a group by degrading their image or reducing their livelihood without recompense. That’s not the case for hoop earrings, which are simply one more aspect of dress that has spread among groups because people like it. Cultural appropriation, a sign of flattery and admiration, has been turned into a grievous sin among Leftists.

But here nobody has been harmed. People have been offended, but that’s ginned-up offense, and I don’t take it seriously.