Here’s an editorial from the April 12 edition of the Wellesley College student newspaper, The Wellesley News. (The school is an expensive and high class women’s school in Massachusetts.) This editorial came to my attention from a post on the website of Jonathan Turley, a professor of constitutional law and writer at George Washington University Law School.

When you see an editorial like the one below (click on the screenshot to go there), you just know that the headline is a lie: 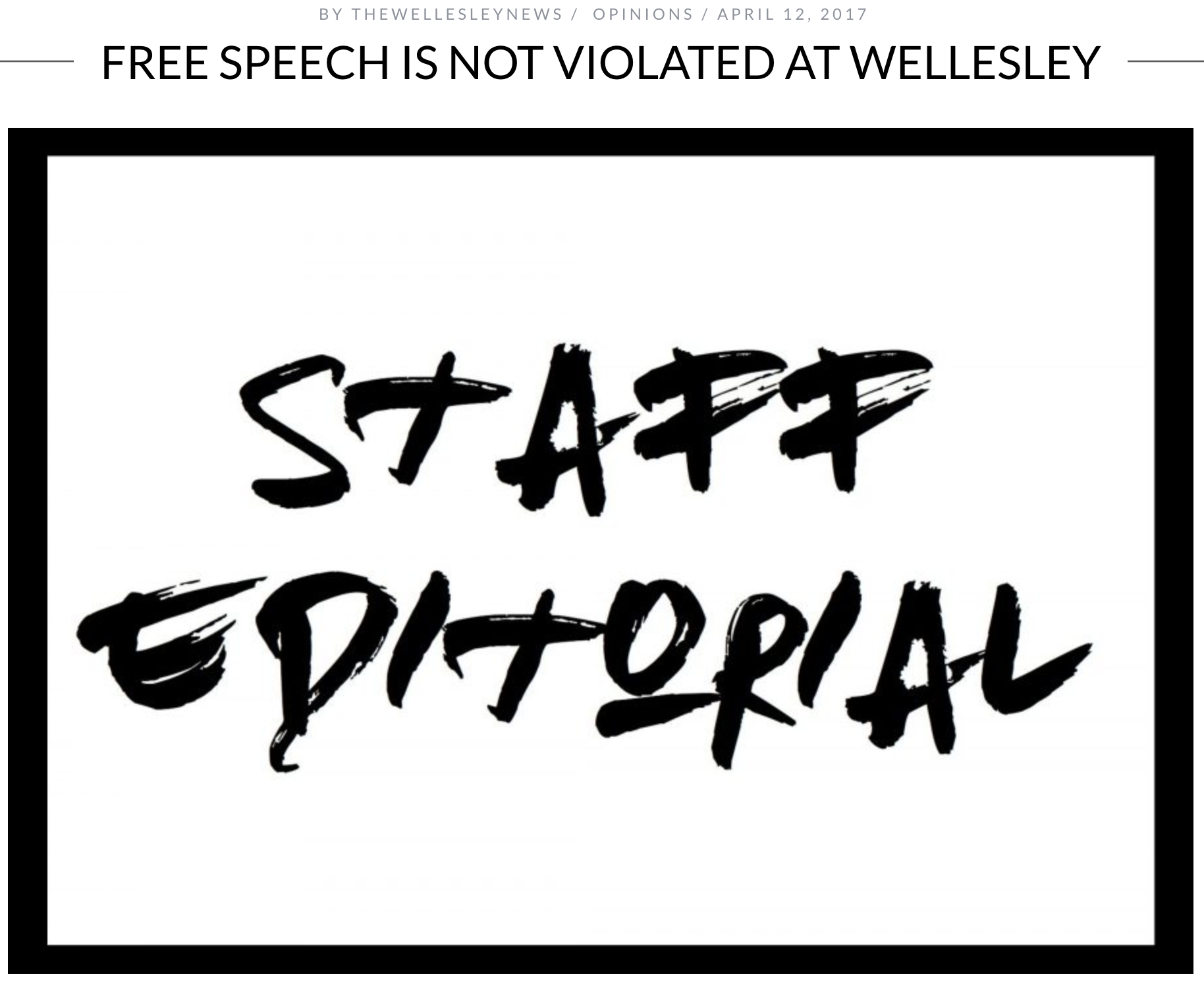 What always strikes me when first reading these editorials is how poor the writing is: it’s verbose and sometimes has grammatical or word errors, like “hot house flowers” (which could be misinterpreted!) instead of “hothouse flowers” in the first paragraph. I’ve highlighted a few more infelicities below. Think how much these women are paying for a Wellesley education, and they can’t even write!

But leaving that aside, what we have is Orwellian doublespeak: “We’re not violating free speech, we’re just shutting down hate speech.” To wit (emphasis is mine):

Many members of our community, including students, alumnae and faculty, have criticized the Wellesley community for becoming an environment where free speech is not allowed or is a violated right. Many outside sources have painted us as a bunch of hot house flowers who cannot exist in the real world. However, we fundamentally disagree with that characterization, and we disagree with the idea that free speech is infringed upon at Wellesley. Rather, our Wellesley community will not stand for hate speech, and will call it out when possible.

Wellesley students are generally correct in their attempts to differentiate what is viable discourse from what is just hate speech. Wellesley is certainly not a place for racism, sexism, homophobia, Islamophobia, transphobia or any other type of discriminatory speech. Shutting down rhetoric that undermines the existence and rights of others is not a violation of free speech; it is hate speech. [JAC: Note the erroneous structure of this sentence: they are saying “shutting down rhetoric” is “hate speech”. What they mean is that shutting down rhetoric is shutting down hate speech.] The founding fathers put free speech in the Constitution as a way to protect the disenfranchised and to protect individual citizens from the power of the government. The spirit of free speech is to protect the suppressed, not to protect a free-for-all where anything is acceptable, no matter how hateful and damaging.

There you have it: a double mischaracterization. First, as we know well, one person’s hate speech is another person’s constructive speech. Discussions about transgender people, the nature of feminism, and the oppressive aspects of Islamic doctrine can be fruitful, but apparently they’re going to be “shut down” at Wellesley.

Further, where did they get the idea that the purpose of the First Amendment was to “protect the disenfranchised”? It is there so that government cannot suppress free discussion by anyone, disenfranchised or not, and no matter what they say. What these editors consider “hate speech” clearly is protected by the First Amendment so they have, as usual, redefined “free speech” to suit their own ideology.

The editors give the impression that the Founding Fathers wrote that Amendment so that blacks, Hispanics, gays, and trangender people would be protected. That is not the case; if any minorities were to be protected, it was religious minorities. But the Amendment was written because its authors saw the liberty of speech as the best way to protect their nascent democracy. Yet characterizing “free speech” in this way gives the students a license to shut down any speech that is on the side of the “non-suppressed.” And that’s exactly what they want to do.

Then we have the obligatory lip service to free discourse, which goes awry because of the hauteur and arrogance of the editors. “Mistakes will happen” here means “you might by accident, or because of your background, say something ideologically impure”:

This being said, the tone surrounding the current discourse is becoming increasingly hostile. Wellesley College is an institution whose aim is to educate. Students who come to Wellesley hail from a variety of diverse backgrounds. With this diversity comes previously-held biases that are in part the products of home environments. Wellesley forces us to both recognize and grow from these beliefs, as is the mark of a good college education. However, as students, it is important to recognize that this process does not occur without bumps along the way. It is inevitable that there will be moments in this growth process where mistakes will happen and controversial statements will be said. However, we argue that these questionable claims should be mitigated by education as opposed to personal attacks.

We have all said problematic claims, [JAC: “said” probematic claims? Which ones? ] the origins of which were ingrained in us by our discriminatory and biased society. Luckily, most of us have been taught by our peers and mentors at Wellesley in a productive way. It is vital that we encourage people to correct and learn from their mistakes rather than berate them for a lack of education they could not control.  While it is expected that these lessons will be difficult and often personal, holding difficult conversations for the sake of educating is very different from shaming on the basis of ignorance.

In other words, “We’re here to educate you!” BUT, if you don’t learn, well, there are consequences:

This being said, if people are given the resources to learn and either continue to speak hate speech or refuse to adapt their beliefs, then hostility may be warranted. If people continue to support racist politicians [JAC: read: Donald Trump. NO PRO-TRUMP SPEECH!] or pay for speakers that prop up speech that will lead to the harm of others [JAC: Read: any right-wing speaker], then it is critical to take the appropriate measures to hold them accountable for their actions.

I hope by “hostility” they don’t mean punching!

And this bit is incredibly arrogant:

It is important to note that our preference for education over beration [JAC: that’s a good word, but shouldn’t have been used as it’s vanishingly rare! At any rate, they’ve already engaged in beration] regards students who may have not been given the chance to learn. Rather, we are not referring to those who have already had the incentive to learn and should have taken the opportunities to do so. Paid professional lecturers and politicians are among those who should know better.

Translation: “Look, we’ll give you two years to get yourself ideologically pure. After that, if you’re still making ‘problematic claims’, then HOSTILITY IS WARRANTED. If you’re on the faculty, speaking to the college, you should already have learned and HOSTILITY WILL BE WARRANTED.”

They finally lapse into the old “emotional labor” trope, which comes off as “You need to be educated, but oy, do you know what trouble it is to educate you?!”

We at The Wellesley News, [JAC: the comma doesn’t belong there] are not interested in any type of tone policing. The emotional labor required to educate people is immense and is additional weight that is put on those who are already forced to defend their human rights. There is no denying that problematic opinions need to be addressed in order to stop Wellesley from becoming a place where hate speech and casual discrimination is okay. However, as a community we need to make an effort to have this dialogue in a constructive and educational way in order to build our community up.

The editorial winds up with a call for “productive dialogue,” which of course means “dialogue that brings you around to the correct point of view—that held by the editors.”

This whole editorial reminds me of the famous statement that Mary McCarthy said when referring to Lillain Hellman’s memoirs: “Every word she writes is a lie, including ‘and’ and “‘the'”. If I were to be more charitable in my criticism, I’d say that the editorial stands out for its lack of specificity: it doesn’t define what hate speech really is. But that’s probably a deliberate omission—on top of the editors’  gross misunderstanding of why we have the First Amendment in the first place.

Were I putting out the thousands of dollars in tuition that these students pay the college, I’d be concerned about whether I was getting my money’s worth. At any rate, here, at Yale, at Harvard, at Berkeley—and at many of the “elite” American colleges—we see in embryonic form the kind of authoritarianism that will ensue if these students ever get political power. Ceiling Cat help us if they do!