Today we have some nice photos from reader Mark Sturtevant. His notes are indented:

These are some pictures of arthropods that I have taken this summer.  The first picture is a common but lovely red milkweed beetle (Tetraopes tetrophthalmus). These are a kind of longhorn beetle that feeds on milkweed, and the bright colors are likely a warning that it is toxic. A character of many longhorns is the possession of compound eyes that wrap around the base of the antennae. This species takes that trait to extremes because the eyes are split by the antennae – so here is an insect with 4 compound eyes! The scientific name refers to this feature. 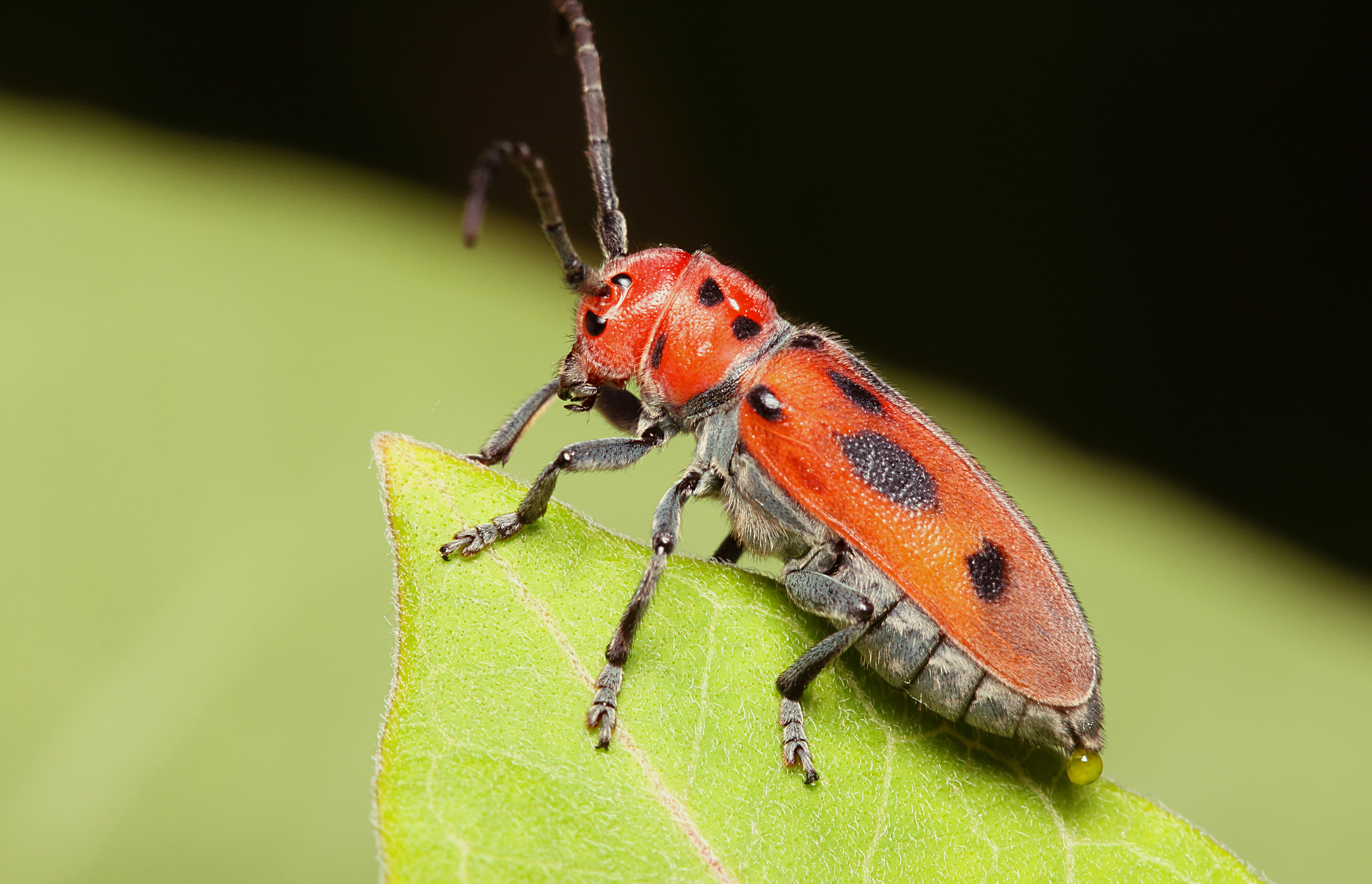 The next two pictures are of an ant mimicking jumping spider, Synemosyna formica. These things are tiny, and so the picture was taken with the aid of a Raynox 150 on my macro lens. She was pretty cooperative for a jumping spider, but she would wander around on this leaf and occasionally pick up this bit of food and nom on it. She would then put it down, explore the leaf a bit, then return to the morsel for another tasting. 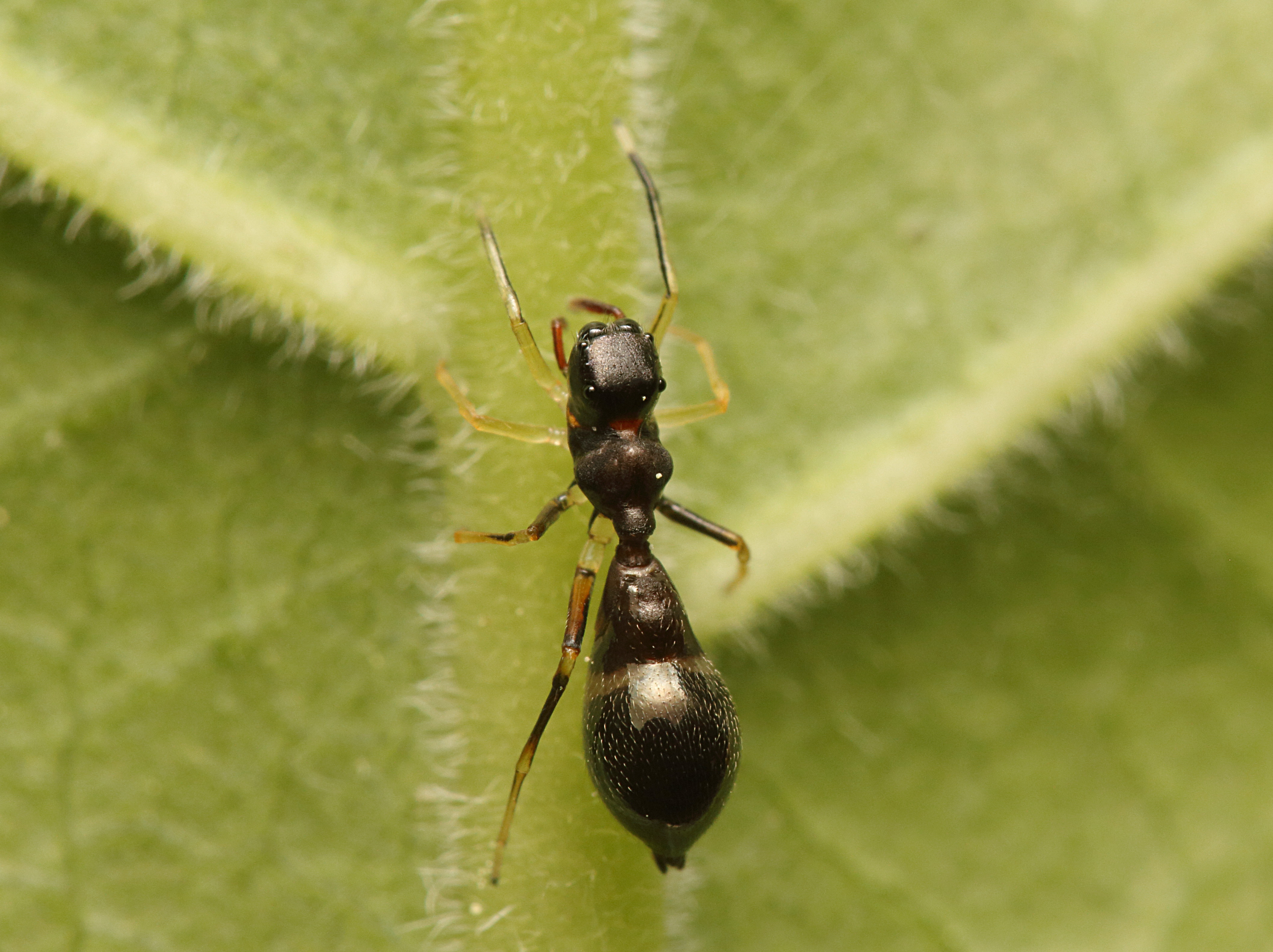 [JAC: Isn’t this a remarkable mimic?] 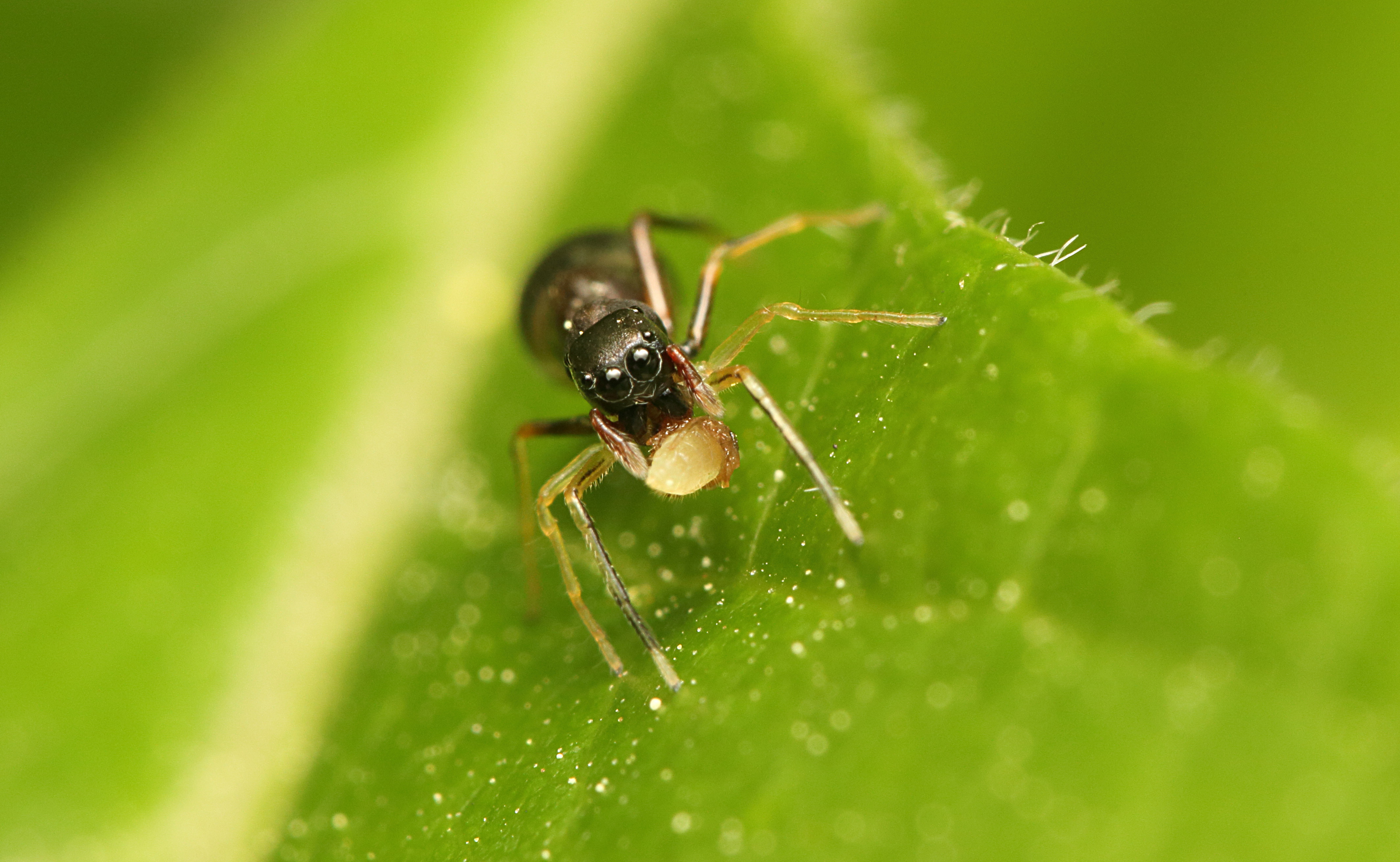 The next picture is of a mating pair of bee-like robber flies (Laphria sp.). These flies are fearsome predators, and are always worth looking for. The male (on the left) was alarmed by my presence and kept trying to buzz away. But he was firmly attached to the female who did not want to fly off, so he was repeatedly yanked to a halt. I hope it was not too painful. 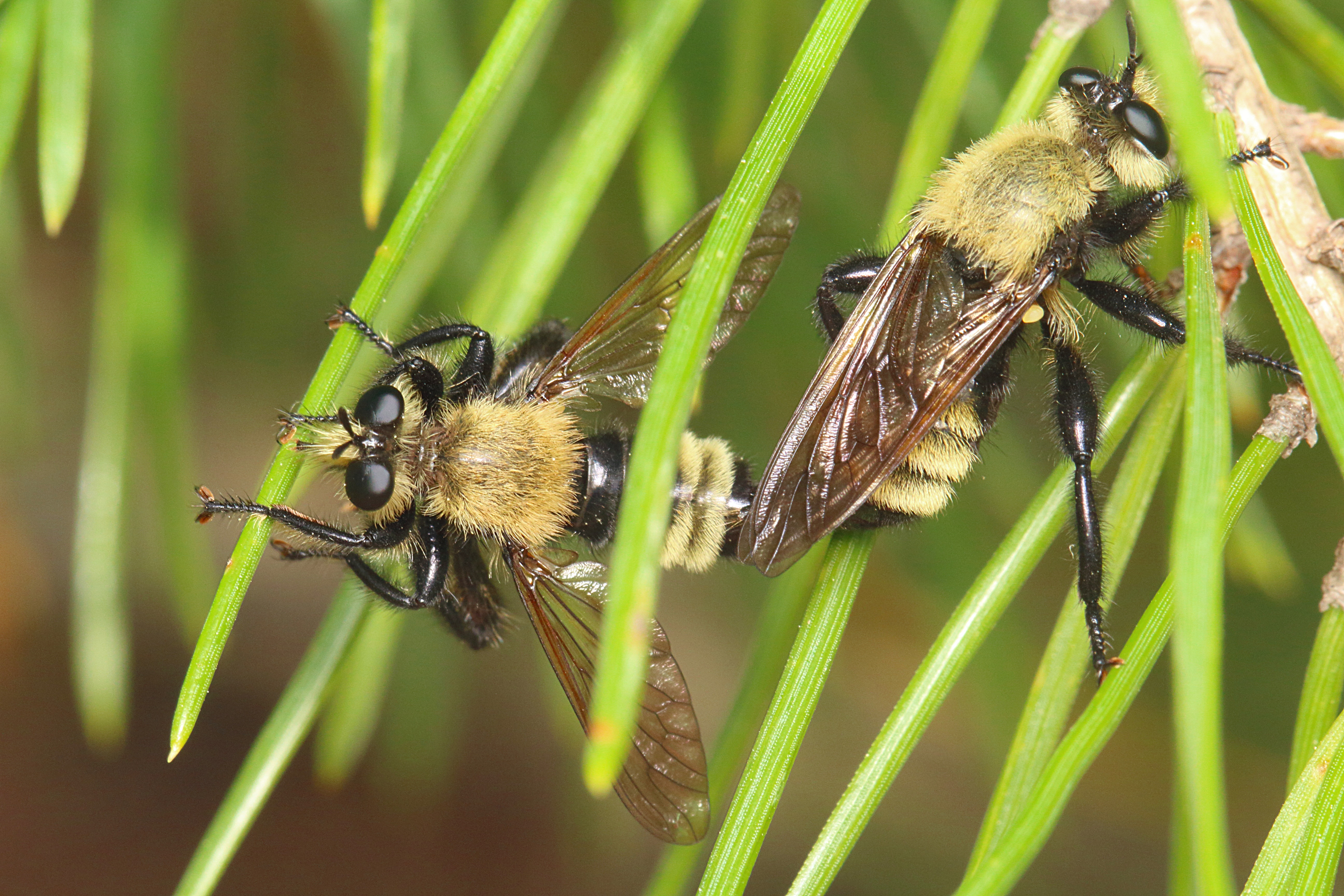 The next three pictures are of some odd-looking grasshoppers. These are adult pygmy grasshoppers (I think Tetrix arenosa) that are only about a quarter inch in length. Another peculiar feature of these ‘hoppers is that the dorsal plate of their first thoracic segment (the pronotum) is extended rear-ward to cover their wings. The first individual has what seems to be mites, and these may be the larval stage of the red velvet mite (see below). The second picture is of a female I spotted only because she had moved. So I got comfortable on the muddy trail and was taking her picture when I noticed a furtive movement nearby. It was a male, and he was creeping up on the female. The male attempted to climb on her but she would kick him off. This happened a few times, but the male was persistent. In the last picture we see he did manage to clamber aboard but his problem is obvious. 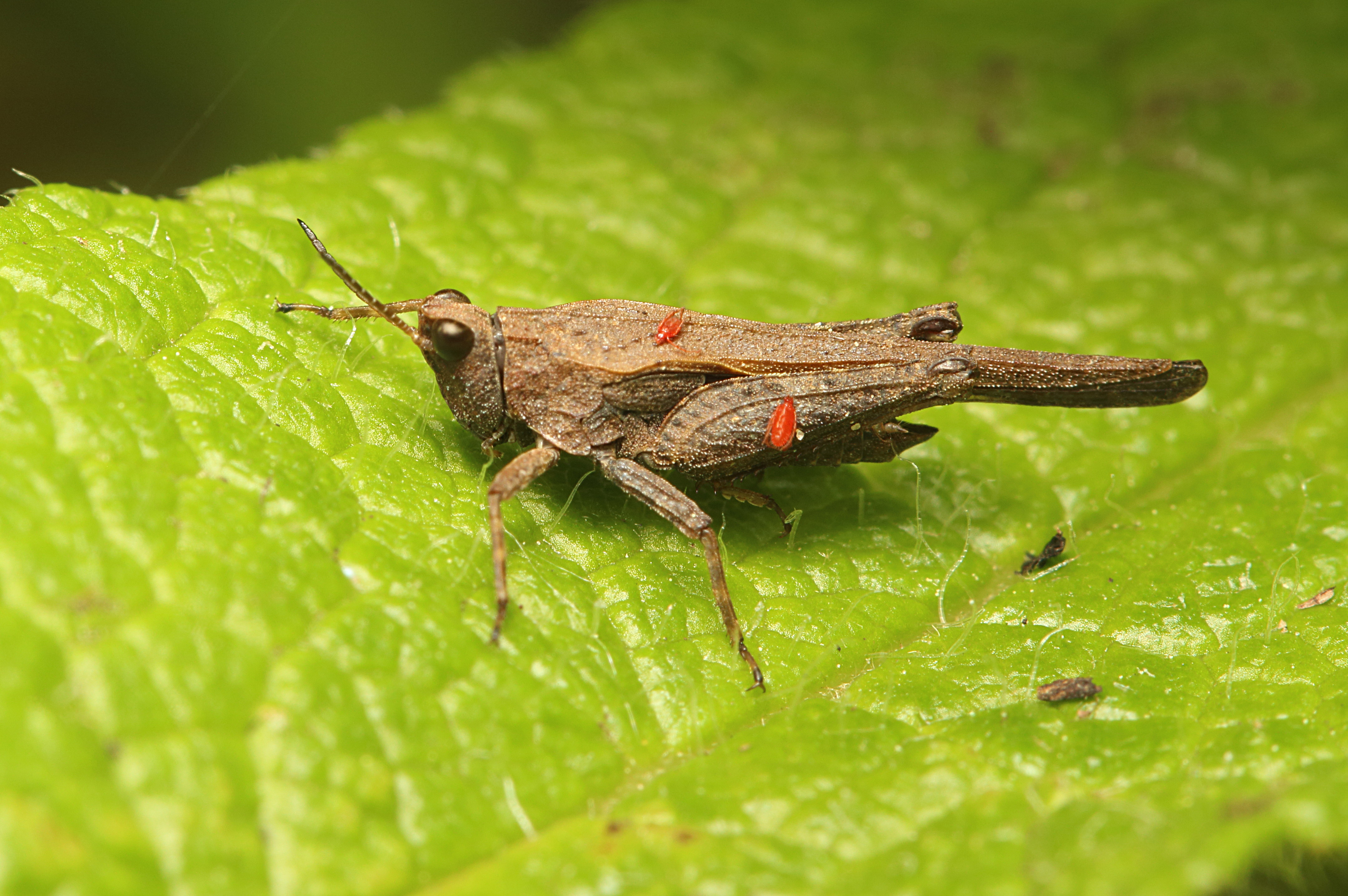 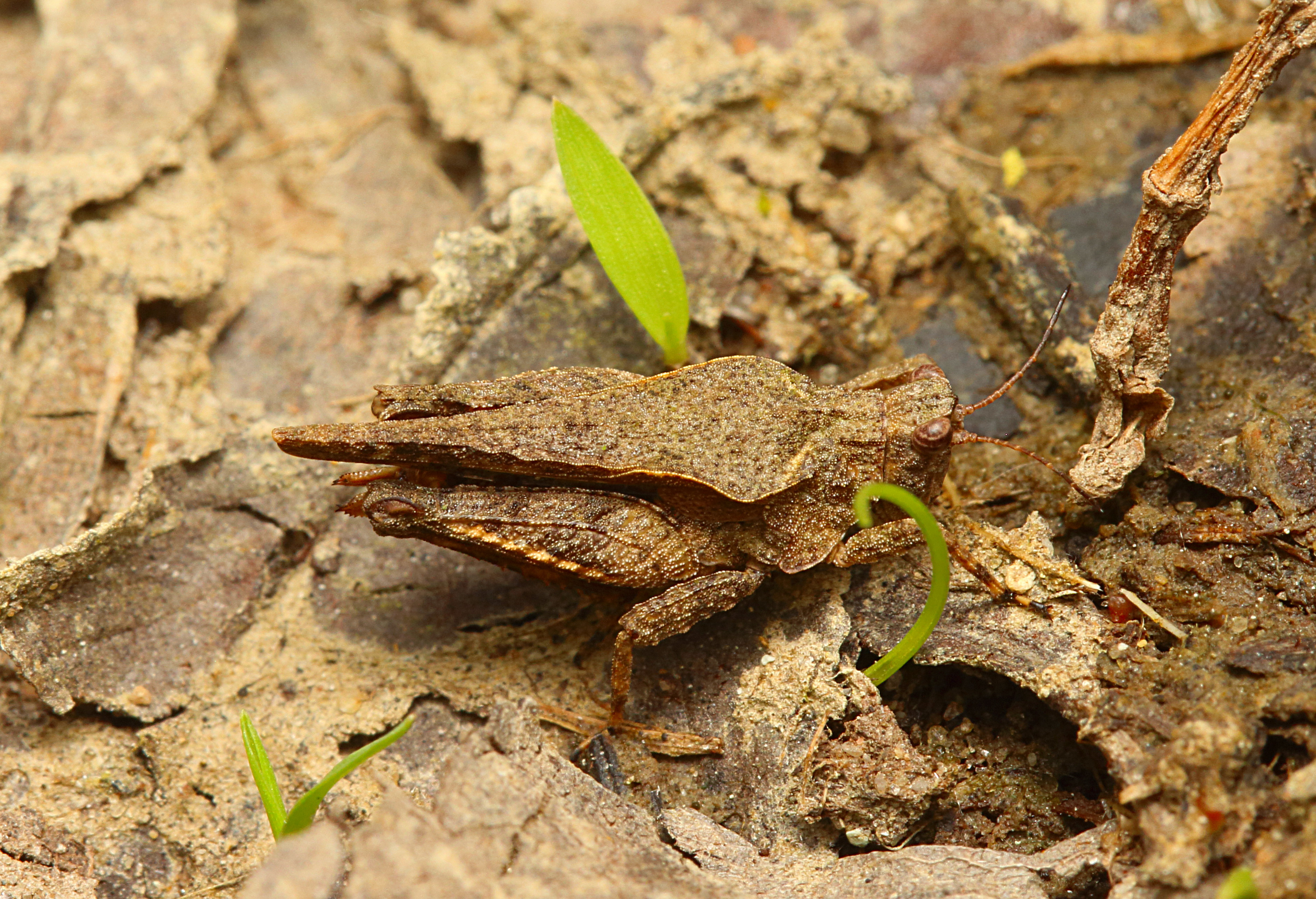 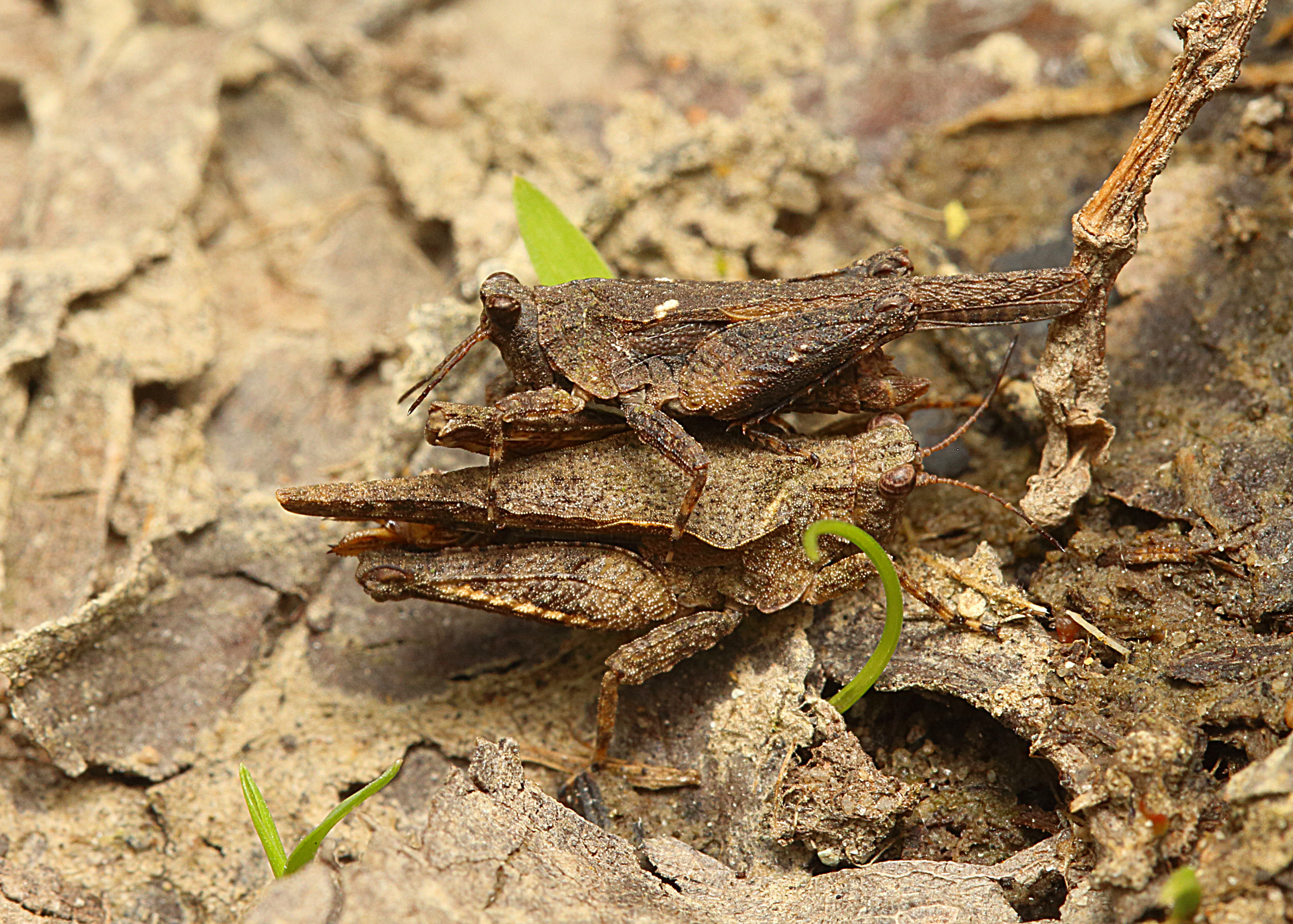 The red velvet mite (Trombidium sp.) in the last picture was creeping around on the forest floor, so I moved it to a place where I could more easily take its picture. It turns out that they have pretty interesting lives. Red velvet mites start out as nymphs which attach themselves to a larger arthropod to suck their hemolymph, as shown here. The nymphs later grow up to be the cute little velveteen critters that we see here. At this stage they are predators of soil arthropods, but of course their minds are really on sex. The sex lives of velvet mites resembles an X-rated soap opera. This story was shown here in WEIT several years ago, where Jerry linked to an educational online cartoon from The Oatmeal. That lesson bears repeating, and so the link is here . 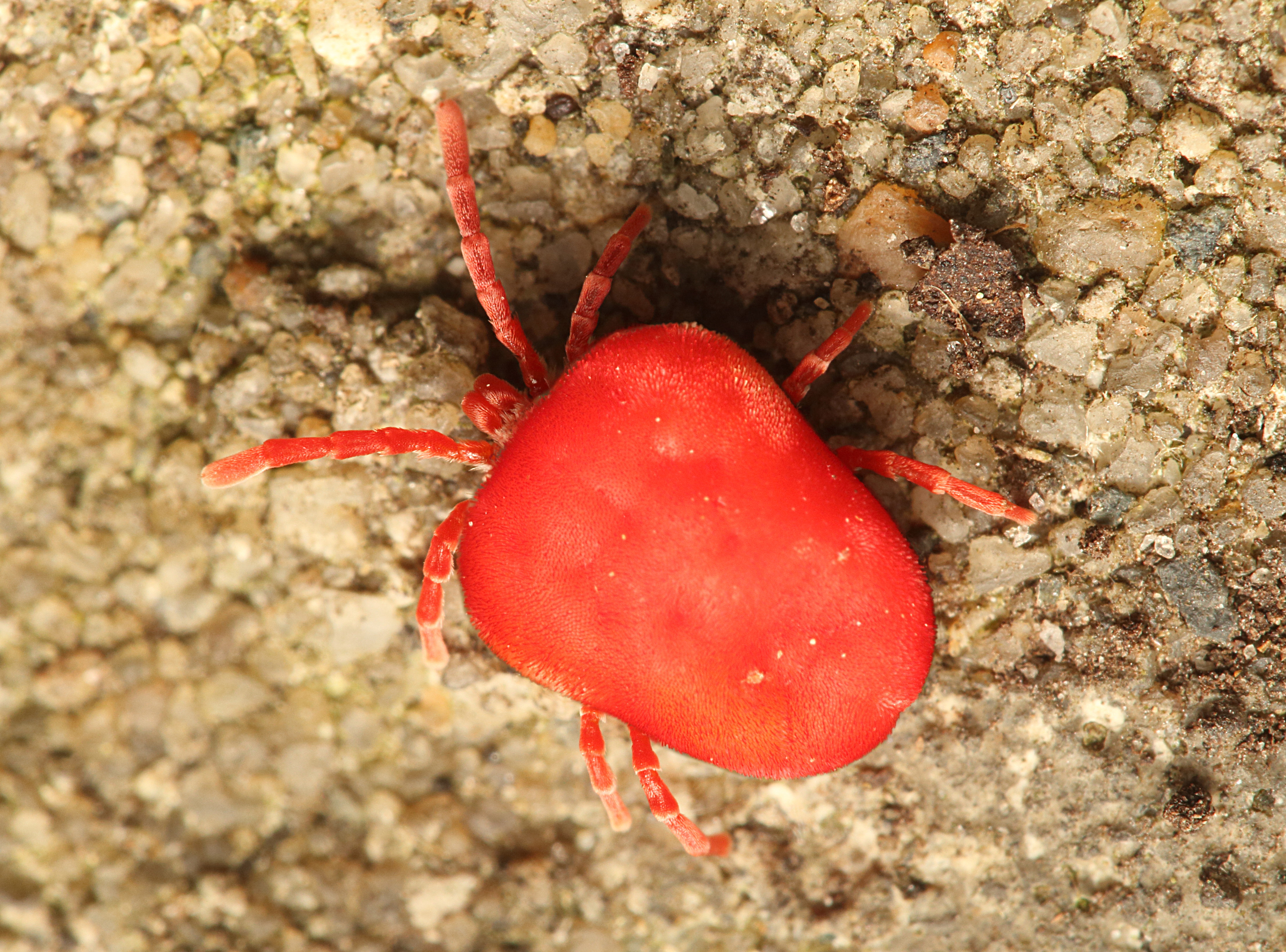