You should be able to recognize the source of my title; if not, go here.

At any rate, the emission of outrage about my discussion of considering euthanasia for suffering and hopelessly ill or doomed infants continues, and one thing that marks that outrage is a complete failure to understand my point. (By the way, although I appreciate those who have sympathized with the misguided attacks on me, those attacks don’t bother me, for that’s the consequence of having strong and controversial opinions on a public forum—especially opinions that go against religious dogma. My concern is just to put the idea out there for consideration, and counter the criticisms when they’re illogical or inacurate.)

Now I hope I made my thoughts clear, and I’ll do it again briefly. If an infant is born that is so ill or malformed that it will die soon, or there is no possibility of a worthwhile existence (as with a child in a persistent vegetative state), we should consider putting the newborn out of its suffering or permanent unconsciousness by euthanizing it. I did not say that every sick or deformed infant should be euthanized. Neither did I say that the state should do the killing, for that would have to be a legal act, regulated by strict guidelines and approved by the parents of the child and the attending physicians.

The purpose of that euthanasia is to minimize suffering in infants who are doomed to a short life of pain or will be permanently unconscious with no hope of revival (in the latter case, as in permanent coma with brain death, there may be no pain, but there will be suffering on the part of the parents as well as a laborious and futile attempt to keep alive a body lacking a functioning brain).

This does not mean that infants with Down Syndrome, for instance, should be euthanized at birth. That condition, due to three copies of chromosome 21 (geneticists call it “trisomy 21”), can and usually is detected before birth, at least in countries that do prenatal testing. Parents of a fetus with Down Syndrome can then decide whether or not to get an abortion (over 90% of such diagnoses in Europe result in a choice to abort).  If the condition is detected soon after birth, and the parents don’t want to care for the child, it can be put up for adoption. Further, although Down Syndrome children often have problems with vision and hearing as well as congenital heart disease, most don’t seem to be undergoing unbearable suffering. Many such children live long lives and are loved by their parents: the average lifespan has increased dramatically with better medical care, and was up to 50 years in 2002 (I think it’s now approaching 60). Euthanizing such a newborn should be considered only in the most extreme medical cases, when the child is suffering greatly, if the parents have no desire to care for it, and there is nobody who wants to care for it.  In such cases I would leave the legal guidelines to the experts, but a Down Syndrome child is not what I had in mind when discussing newborns who are candidates for euthanasia.

Nevertheless, this article at the New Americana, a conservative website (yes, I’m “Professor Death”), is a long “rebuke” of my stand by a woman who has a Down Syndrome child and loves him. (Click on screenshot to go to link.) 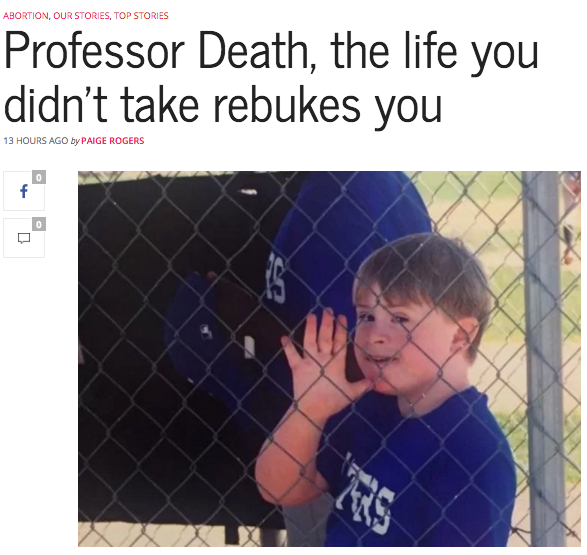 At least one medical professional, Lisa Dennis – a long-time nurse (RN, CCP, LP) and the mother of a disabled child (now a young adult) – isn’t buying into Professor Coyne’s murderous premise. I [author Paige Rogers] shared Coyne’s blog post with Lisa. Her rebuke of the spiritually near-sighted and morally bankrupt professor is both poignant and compelling.

“My son with Down Syndrome, though non-verbal, is the most sociable young man at his school. Jeffrey gives all he meets the gifts of kindness, enthusiasm, and warmth. He exudes all the best of humanity. While pursuing confirmation at church, he spiritually inspired all who witnessed his journey. He personifies the quote attributed to St. Francis of Assisi, Spread the Gospel; use words if necessary,” she said.

“The professor states, that when religion vanishes, as it will, so will much of the opposition to both adult and newborn euthanasia. My response is that when religion vanishes, so will mankind. Future generations will judge today’s society, not for the respect for new life (even flawed and brief), but for the brutality of ending so many pre-term lives in the brutal practice of abortion. Cursed be he that taketh reward to slay an innocent person.- Deuteronomy 27:25.”

It goes on like this, extolling Jeffrey’s virtues and the happiness he brought to his parents, and I’m delighted to hear it. It’s a win/win situation, and Ms. Dennis sounds like a great parent.  But she and the authors don’t realize that it’s not someone like Jeffrey whom I see as a candidate for euthanasia. His parents presumably knew through prenatal testing that he had trisomy 21, or knew shortly after birth, and, despite that, chose to raise him. (She should ask herself, though, what if neither the parents nor anyone else wanted to raise him or adopt him?)

“God gives us many gifts.; one must only open one’s eyes to see them,” said Lisa. I wish Professor Coyne could meet Jeffrey. Perhaps then he could understand the real value, the real worth of a human life, regardless of how “doomed” or how “unhappy” that life may have first appeared to the benevolent professor.

In fact, I’ve met several children with Down Syndrome, all raised by parents who were caring, even though they may have preferred to have a more normal child. And yes those children have worthwhile lives—worthwhile to both their parents and themselves. But I wish Lisa could see, as she can by going to the pediatric wing of her hospital, the children living with anencephaly—no brain at all—or with the conscious part of their brain destroyed, or in a persistent and irreversible vegetative state. I wish she could see the children with more severe genetic defects who are in pain, kept alive only with feeding tubes and respirators. Are those lives worthwhile? If so, to whom? If the parents find it “worthwhile” to keep those infants alive at all costs, does that outweigh the fact that the infants are either suffering or will never become conscious human beings, tied forever to mechanical devices that breathe for them?

My thinking on this issue is evolving, for euthanizing infants is not by any means an easy issue. But I am sure of one thing:  in some cases it is the right thing to do.

From the mailbag (attempted comments on this site). These refer to my original post of July 13, and I’ve left spelling and grammar untouched:

I’m glad to see people like (((Jerry Coyne))) squirm at the presence of morality, telling others about their feverish nihilistic dreams.

Nothing you say is new. Nothing is revolutionary. The things you say have already existed for millenia. And for those millenia they have been laughed at, because they are a joke. A symptom of lack of meaning in life and theological illiteracy.

It’s nice that these people exist, since this complete lack of decency has been aanounced for many, many centuries. I can add this and other statements to my folder, then show it to atheists and say “we told you so”.

Mozalbete added this in a subsequent response to reader Kevin’s comment that euthanasia should be a critical component of a moral and progressive society:

You should at least try to hide your mental issues

Well, there’s no response here to the moral argument; just ad hominems. The person has nothing.

And from reader BK Lawson:

When all of you people who support murdering babies end up in Hell, let me know how that worked out for you. Playing God is up to God – not you.
Murder is murder, plain and simple.
This is just sick.
Now, let me ask you this – how long will it be until you’re all lobbying to murder sick or injured children that it simply costs too much to heal? Where do you draw the line?
What’s next? Return to the eugenics laws of the early 20th century?
Go ahead and flame me all you want.
Wicked people like you will be ignored.

Again, nothing substantive but Bible-waving. Lawson doesn’t answer the questions of “What is the right thing to do with a suffering and doomed infant that can be kept alive only by extreme measures like respirators, or will die shortly, but in agony? Do you want it to suffer continuously until it dies? Why would putting such a child out of its misery be wrong?”

I’ve still not seen an answer to these questions from any of the critics. But we have seen that many of these views are motivated by religion, which, as it has so many times in the past, tried to block moral progress to satisfy the imagined demands of a nonexistent deity.

146 thoughts on “Now I am become Professor Death, the destroyer of infants”