On Sunday, by a vote of 8-0 (Gorsuch didn’t rule), the U.S. Supreme Court decided the case of Matal v. Tam,  which involved a application to trademark the name “The Slants,” an Asian band of which Simon Tam was a member. Tam’s attempt to  trademark the band’s name was rejected by the trademark office, but a federal appeals court ruled that that rejection was illegal because the U.S.’s Lanham Act (1946), under which the application was rejected, was unconstitutional. That Act is the U.S.’s main trademark law, and prohibits trademarks that disparage individuals or groups. The initial rejection was, I think, based on the fact that “slant” is a slur on Asians, referring to their eye shape (they have an epicanthal fold), and thus that the name disparages an ethnic group.  The Slants comprise four Asian-Americans, but that doesn’t matter:

The appeals court ruled that rejecting the name violates the First Amendment’s provision of free speech. The government appealed, and on June 18 the Supreme Court voted to uphold the appeals court ruling (see that link for all legal documentation); ergo you can register a trademark that some people would consider “hate speech.” For those who like some visuals with their news, here’s a short history of the case in which an Asian-American lawyer explainins the Supreme’s decision:

The opinion, written by Justice Alito, is here and starts on page 5 of the link. And here, in yellow, is the relevant part of the ruling: 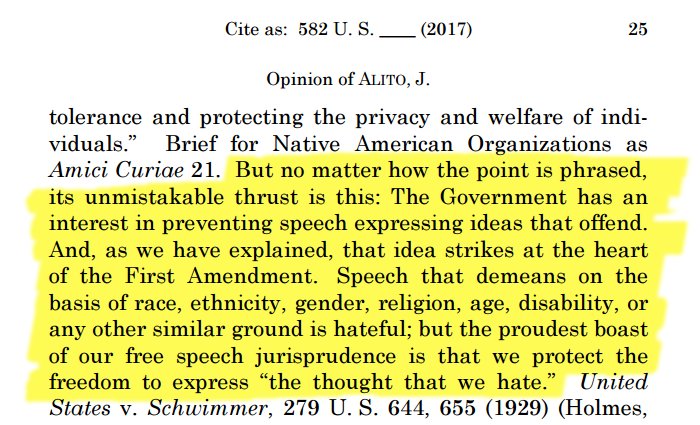 It’s unusual for the Court—liberals and conservatives alike—to rule unanimously on a case like this. What’s clear is that they’ve left no doubt that “hateful speech” that demeans people “on the basis of race, ethnicity, gender, religion, age, disability or any other similar ground” is protected under the First Amendment, a ruling consistent with the court’s history. Of course I will decry genuine bigotry, but, as always, the court is trying to prevent a slippery slope policy in which some speech that people consider hateful (like criticism of Islam or affirmative action) is seen by others as constructive. As for purely bigoted speech, we still have something to learn by allowing its promulgation (viz., Holocaust denialism, the discussion of which has taught me a lot). I’ve found John Stuart Mill’s discussion of that point in On Liberty pretty convincing.

It’s telling that liberal and very conservative Justices agree that the Constitution affords no protections for people becoming offended. Those who cry that “hate speech is not free speech” are thus flying in the face of this strong legal opinion.