For 35 years the results have held pretty constant, as the graph shows below, 40-50% of all Americans have over time been young-Earth creationists when it comes to human evolution, 30-40% are “theistic evolutionists” who accept some form of teleological, god-guided change, and the “natural evolutionists”—those who accept human evolution as a purely natural and unguided process, as scientists think it is—have hovered around an abysmal 10%.

The latest survey, however, gives us some hope, as the graph below shows 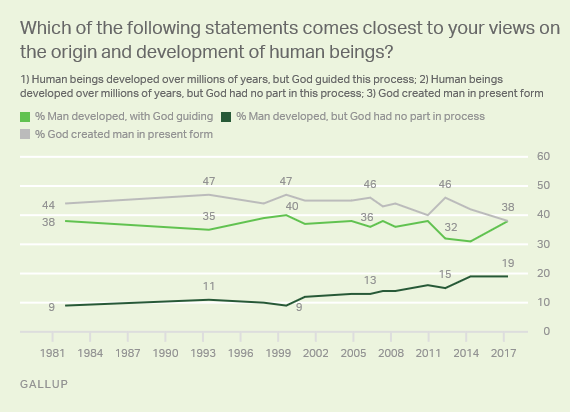 Young-Earth “human creationsts” have dropped to their lowest level yet—38%—a figure identical to “theistic human evolutionists”, which is pretty much in line with the past. The big news to me is the steady rise of those accepting naturalistic evolution as an explanation of humans: it’s gone from 9% in 1982 to 19% in 2014 and 2016: more than a doubling. One in five Americans now thinks we got here in the way science tells us! Yes, compared to Europe that’s dreadful, but it’s still an increase. . .

Do remember, though, that of all those people who do accept a role for evolution in human origins, only 33% (19/[19 + 38]) think it’s natural evolution. 67% of evolution-accepters still see a hand of god on our origins, which makes them quasi-creationists. We have a long way to go.

Although the data aren’t decisive, I will predict that this is part of a longer-term trend of Americans beginning to accept the truth of evolution.  Why do I think that? Because America, like Europe before us, is becoming more secular, and with increasing secularity comes an acceptance of evolution. As I’ve always said, I know of only one evolution-denier who isn’t motivated by religion. (That’s David Berlinski, and I have my doubts about him.) But why is America becoming less religious? Well, read my Evolution paper to see my hypothesis.

Gallup also shows. as it has before, that acceptance of evolution rises with level of education, is lower among those who are believers than those who have no religious preference, and is negatively correlated with church attendance: 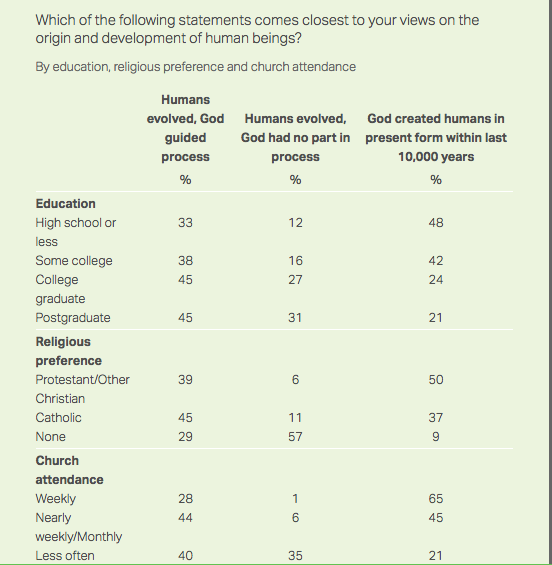 As Gallup notes in a sort of wishy-washy summary:

Most Americans believe that God had a role in creating human beings, whether in their present form or as part of an evolutionary process over millions of years. But fewer Americans today hold strict creationist views of the origins of humans than at any point in Gallup’s trend on the question, and it is no longer the single most popular of the three explanations. Creationism still ties for the leading view, along with the view that evolution was guided by a divine hand. Fewer than one in five Americans hold a secular view of evolution, but that proportion has doubled since the start of this millennium.

. . .There has been an increase in the percentage of those holding the secularist viewpoint in recent years, which aligns with the scientific belief that has been prevalent in public school teaching since the Scopes Monkey Trial. This push and pull with creationism will undoubtedly continue, as this debate about where humans came from rages on.

42 thoughts on “Is creationism on the wane in America?”