According to CBS in Detroit, Michelle Hoitenga, a state representative in Michigan, has introduced a bill (see it here) that in effect bans sharia law, although U.S. law already supersedes sharia law and the bill seems completely unnecessary and anti-Muslim.  The bill doesn’t specifically mention sharia law, but that’s clearly its aim:

As used in this act “foreign law” means any law, legal  code, or system of a jurisdiction outside of any state or territory 5 of the United States, including, but not limited to, international  organizations and tribunals, and applied by that jurisdiction’s courts, administrative bodies, or other formal or informal tribunals. A court, arbitrator, administrative agency, or other  adjudicative, mediation, or enforcement authority shall not enforce  a foreign law if doing so would violate a right guaranteed by the 6 constitution of this state or of the United States.

A court, arbitrator, administrative agency, or other adjudicative, mediation, or enforcement authority shall not enforce a foreign law if doing so would violate a right guaranteed by the constitution of this state or of the United States.

According to Hoitenga, the bill was motivated by the recent case of female genital mutilation (FGM) practiced on several girls aged 6 to 8 by a Muslim doctor in Detroit. The doctor, Jumana Nagarwala, has been duly charged with a criminal offense:

The sponsor, Republican Rep. Michele Hoitenga of Manton, said in an email to House members this week that a Detroit-area doctor recently charged with performing genital mutilation on two young girls was “essentially practicing a fundamentalist version of Sharia law,” according to MLive.com.

The Huffington Post, however, argues that FGM is not an Islamic practice, and also that sharia law has been grossly misunderstood; this is part of PuffHo’s Regressive Leftist campaign to glorify Islam by hiding some of its shady practices. As always, this is because Muslims are considered People of Color and therefore oppressed.

HuffPo is right on one count: the bill is superfluous, prohibiting what is already prohibited. But it errs, deliberately, in saying that sharia law is innocuous and misunderstood:

Sharia law, a favorite bogeyman of anti-Muslim extremists, is the deeply misunderstood legal or philosophical code of Islam. It’s interpreted differently by Muslims across the world using an assortment of texts, including the Quran, the Sunnah and Hadiths.

Yes, sharia law is interpreted differently in different places, but in no place is it superior to the laws of Western democracies, and in many places sharia (which in most Muslim-majority countries has become part of state law) is oppressive, unfair, and ludicrously regressive. For instance, in many places sharia makes apostasy a capital crime, prohibits drinking, makes the testimony of a woman in court worth only half of a man’s (!), considers in judicial sentencing that a woman’s life is worth half of a man’s, and allows or even requires barbaric practices like beheading or the mutilation of hands or limbs. Yet, according to the 2013 Pew Survey of beliefs in Muslim-majority lands, support for sharia is widespread (note: countries like Saudi Arabia, Yemen, and Iran weren’t surveyed), with many suggesting that it be applied to non-Muslims. Here are some data I’ve shown before from that survey: 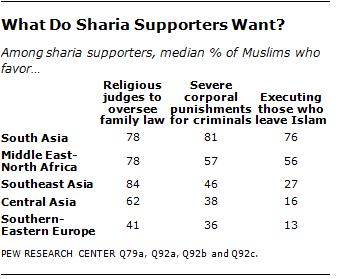 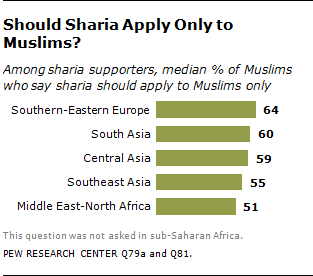 So yes, Michigan’s anti-sharia bill is superfluous, but support for sharia among Muslims is widespread. Even in Britain, Muslim support for sharia is strong: the National Secular Society reports a Policy Exchange Survey of British Muslims that showed this:

“There are relatively large levels of support among British Muslims for the implementation of elements of Sharia law,” Policy Exchange said.

35% of 18-24 year olds expressed support for “aspects” of sharia and nearly half of the over-55s supported some “provisions” of sharia.

Okay, but putting that aside, is FGM an Islamic practice, or does it have something to do with the faith? The accused doctor certainly thought so! As the Detroit News reported:

A Detroit emergency room physician charged with mutilating the genitalia of two 7-year-olds from Minnesota denied cutting the girls, saying she merely performed a religious procedure that involved removing and then burying skin in the ground.

Dr. Jumana Nagarwala’s lawyer offered the explanation Monday during a dramatic 90-minute court hearing in front of a standing-room-only crowd. The hearing ended with a federal magistrate judge ordering the Northville doctor jailed without bond while awaiting trial, the first of its kind in federal courts nationwide.

Dr. Nagarwala is clearly a Muslim:

We all know that Reza Aslan, another apologist for Islam, has also denied that FGM has anything to do with the religion, and PuffHo echoes his sentiments:

The practice [FGM] “has not been confined to a particular culture or religion,” according to the Female Genital Mutilation National Clinical Group, a United Kingdom-based charity working with women who have suffered FGM. “FGM has neither been mentioned in the Quran nor Sunnah.”

“FGM existed long before Islam and it sadly persists today as a cultural tradition that traverses religious lines,” Rashid wrote. “For example, in Ethiopia, Muslims, Christians, and Jews have all practiced FGM — though no faith endorses the act.”

And because there is no solid theological basis for FGM in Islam, Rashid said, the only people today who believe FGM is a part of Islam are “Islamophobes and extremists [who ascribe to Islam].”

Well, I can think of no better refutation of this nonsense than Heather Hastie’s post from 2014, “Reza Aslan: Lying for Islam on FGM.” Read it if you encounter people who disavow a connection between Islam and FGM, for Heather simply demolishes that claim with data. Here’s a small excerpt:

In Sunni Islam, there are four schools of jurisprudence that express an opinion on the matter. Two of them, the Hanbali and Shafi’i schools, consider FGM obligatory, while the other two, the Hanafi and Maliki schools, recommend it. In addition, there have been several fatwas issued regarding FGM over the years, the majority of which favour it. (Fatwas are not compulsory, but devout Muslims consider them morally imperative.) For example, Fatwa 60314 includes statements that express the importance of FGM within Islam and dismiss the opinions of doctors.

The belief that FGM is an expression of faith if you are a good Muslim is widespread, insidious and promoted by religious leaders. Even in those Muslim countries where it has been banned, there is push-back by religious leaders. In Egypt for example, FGM was finally banned after several failed attempts in 2008. However, it is still being carried out outside hospitals and the Muslim Brotherhood has a campaign to get the law overturned. Mariz Tadros reported in May last year that “the Muslim Brotherhood have offered to circumcise women for a nominal fee as part of their community services”.

FGM apologists like Aslan and PuffHo could find out about this stuff if they wanted, but it goes against their pro-Muslim narrative. Talk about “alternative truths”!  These are not a monopoly of the Right.

64 thoughts on “Once again, is female genital mutilation connected with Islam?”