I think I’m gonna lay off PuffHo after this one; I’m tired of reading them, I’m tired of criticizing them as a widely-read but Regressive Leftist organization, and they’re probably already licking their wounds over their latest gaffe.

What was it? They published an article by one “Shelley Garland” called “Could it be time to deny white men the franchise?” That article no longer is available at HuffPo—and that’s part of the story—but you can find it archived here.  The author identified herself as a student at the University of Cape Town working on a master’s degree in philosophy, and as an “activist and feminist working on ways to smash the patriarchy.” That last bit should have raised a red flag to at least half mast, but it didn’t. What was worse, though, was the article itself, for it called for white men worldwide to not only be politically disenfranchised, losing the vote for several decades, but also to have their property confiscated and redistributed. Here are a few quotes:

If white men no longer had the vote, the progressive cause would be strengthened. It would not be necessary to deny white men indefinitely – the denial of the vote to white men for 20 years (just less than a generation) would go some way to seeing a decline in the influence of reactionary and neo-liberal ideology in the world. The influence of reckless white males were one of the primary reasons that led to the Great Recession which began in 2008. This would also strike a blow against toxic white masculinity, one that is long needed.

At the same time, a denial of the franchise to white men, could see a redistribution of global assets to their rightful owners. After all, white men have used the imposition of Western legal systems around the world to reinforce modern capitalism. A period of twenty years without white men in the world’s parliaments and voting booths will allow legislation to be passed which could see the world’s wealth far more equitably shared. The violence of white male wealth and income inequality will be a thing of the past.

. . . Some may argue that this is unfair. Let’s be clear, it may be unfair, but a moratorium on the franchise for white males for a period of between 20 and 30 years is a small price to pay for the pain inflicted by white males on others, particularly those with black, female-identifying bodies.

Well, that’s strong stuff, and racist and unfair as well, but of course HuffPo (the article originated in HuffPo South Africa) defended it as consonant with feminism, and even gloated at the hits that odious piece got! Their defense was later removed, but, called “This Blog On White Men Is Going Viral. Here’s Our Response“, it’s been archived. Here’s part of their defense, given after they list some of the pushback on social media against “Shelley Garland”‘s article:

Garland’s underlying analysis about the uneven distribution of wealth and power in the world is pretty standard for feminist theory. It has been espoused in many different ways by feminist writers and theorists for decades now. In that sense, there was nothing in the article that should have shocked or surprised anybody (or so we thought.) It would appear that perhaps much of the outcry derives from a very poor reading of the article — or perhaps none at all. [JAC: Poor reading? It’s pretty clear to me!] Dismantling the patriarchal systems that have brought us to where we are today, a world where power is wielded to dangerous and destructive ends by men, and in particular white men, necessarily means a loss of power to those who hold it. A loss of oppressive power. Those who have held undue power granted to them by patriarchy must lose it for us to be truly equal. This seems blindingly obvious to us.

This doesn’t necessarily mean we agree or endorse everything in Garland’s blog. The point of our Voices section is to invite a wide array of voices and views. [JAC: Don’t make me laugh!]

We hope, as reads continue to rack up on this blog, that those who are tempted to fire off an angry email to us would first engage with the underlying analysis in Garland’s blog. [JAC: they did!] 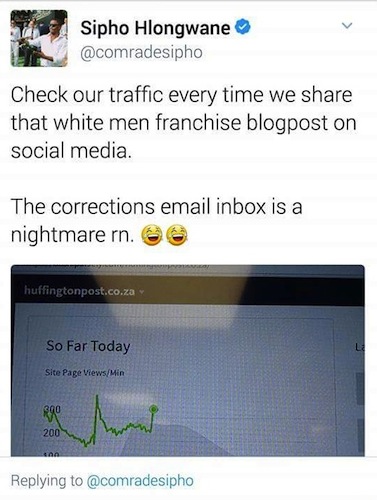 And HuffPo South Africa defended the piece as well:

Huffington Post SA has removed the blog “Could It Be Time To Deny White Men The Franchise?” published on our Voices section on April 13, 2017.

We have done this because the blog submission from an individual who called herself Shelley Garland, who claimed to be an MA student at UCT, cannot be traced and appears not to exist.

We have immediately bolstered and strengthened our blogging procedures that, until now, have operated on the basis of open communication and good faith. From now on, bloggers will have to verify themselves.

We will hold discussions on putting in place even better quality controls.

In addition, we note the commentary on the content of the blog post and will submit it to the South African Press Ombudsman Joe Thloloe for his analysis of the opinion we carried.

We further understand that universal enfranchisement followed a long struggle and we fully support this.

In addition, Huffington Post South Africa is a signatory to and supporter of the South Africa Press Code. We support free expression as limited by the following value as set out in that code.

5.1. Except where it is strictly relevant to the matter reported and it is in the public interest to do so, the media shall avoid discriminatory or denigratory references to people’s race, gender, sex, pregnancy, marital status, ethnic or social origin, colour, sexual orientation, age, disability, religion, conscience, belief, culture, language and birth or other status, nor shall it refer to people’s status in a prejudicial or pejorative context.

5.2. The media has the right and indeed the duty to report and comment on all matters of legitimate public interest. This right and duty must, however, be balanced against the obligation not to publish material that amounts to propaganda for war, incitement of imminent violence, or advocacy of hatred that is based on race, ethnicity, gender or religion, and that constitutes incitement to cause harm.

We apologise for the oversight. We welcome further discussion. Please email blogs@huffpostsa.com.

Well, would they have published the piece if they verified that Shelley Garland did indeed exist? That’s what they imply, but at the same time they say her article violated their own speech code and was “hate speech”. Which is it, PuffHo?

What I think happened is that HuffPo South Africa published a piece that resonated with their own ideology, which includes blaming the world’s woes on white men, without thinking too hard about what it means to take the vote away from a whole group of people and redistributing their property.  And, had the author not been a hoaxer, the article would be up still, because they’d refused to remove it on the grounds of content alone. What we see is a Sokal-style hoax that exposes PuffHo’s identity politics—an invidious identity politics that is explicitly racist.

Well, I’m done with this venue for the time being. Disenfranchising people isn’t right just because they’re not an “oppressed minority”. What happened to equal rights for everyone, including voting rights?

60 thoughts on “HuffPost publishes post urging that white men be disenfranchised, first defends it and then removes it because it was a hoax”