If you know about the civil rights struggle in the U.S., you’ll know the story of Emmett Till. An African-American boy from near Chicago, Till, aged 14, went to visit relatives in Mississippi in 1955. There he was falsely accused of whistling at and flirting with a white woman. (It’s recently come to light that she completely fabricated that story.) Because of his supposed “crime”, Till was tortured and killed by the woman’s husband and his half brother.

The two men were arrested and tried for the kidnapping and murder of Till, but—as usual back then—were acquitted by an all-white jury, though the men later admitted they did the deed. (Laws against double jeopardy prevented another trial.)

Here’s Till a year before his murder: 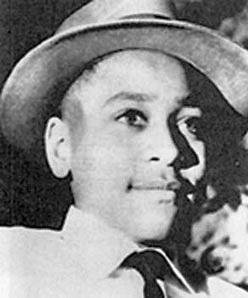 When Till’s body was returned to Chicago, his face battered and mauled, his mother insisted on an open-casket funeral so people could see what had been done to her boy. I won’t show the picture, but you can see it here; it was published in the Chicago Defender, a black newspaper, and then republished widely, horrifying both black and white Americans. Till’s death and the open-coffin funeral did have a galvanizing effect on the civil rights movement, probably helping fuel the Montgomery (Alabama) bus boycott in late 1955.

Now, however, a painting based on the open-casket photo has stirred a big controversy in the art world—because it was painted by a white woman, artist Dana Schutz. The painting is below:

And the Guardian reports this:

At the centre of the battle over cultural appropriation is artist Dana Schutz’s expressionist painting Open Casket (2016), a gruesome depiction of Emmett Till, lynched in Mississippi in 1955.

The painting, on display at the Whitney Biennial exhibition, initially drew swift condemnation from critics who claimed Schutz, who is white, was taking advantage of a defining moment in African American history.

African American artist Parker Bright stood in front of the painting with Black Death Spectacle written on his T-shirt, and a young British artist, Hannah Black, accused Schutz of having “nothing to say to the black community about black trauma”, demanding that the work “be destroyed and not entered into any market or museum”.

Wikipedia‘s bio of Schutz gives more detail about the accusations of cultural appropriation:

Artist and Whitney ISP graduate Hannah Black started a petition for the painting to be removed, writing:

Schutz responded, “I don’t know what it is like to be black in America, but I do know what it is like to be a mother. Emmett was Mamie Till’s only son. The thought of anything happening to your child is beyond comprehension. […] It is easy for artists to self-censor. To convince yourself to not make something before you even try. There were many reasons why I could not, should not, make this painting … (but) art can be a space for empathy, a vehicle for connection.”

Josephine Livingstone and Lovia Gyarkye of the New Republic argued Open Casket is a form of cultural appropriation disrespectful toward Mobley’s intention for the images of her son. [JAC: see that article here.] Describing how the painting undermines the photograph they wrote, “Mobley wanted those photographs to bear witness to the racist brutality inflicted on her son; instead Schutz has disrespected that act of dignity, by defacing them with her own creative way of seeing.” Scholar Christina Sharpe, one of 34 other signers of Black’s letter, argued for the destruction of the painting so that neither the artist nor future owners of the painting could profit off it.  Schutz’s work reportedly goes for up to $482,500 at auction. 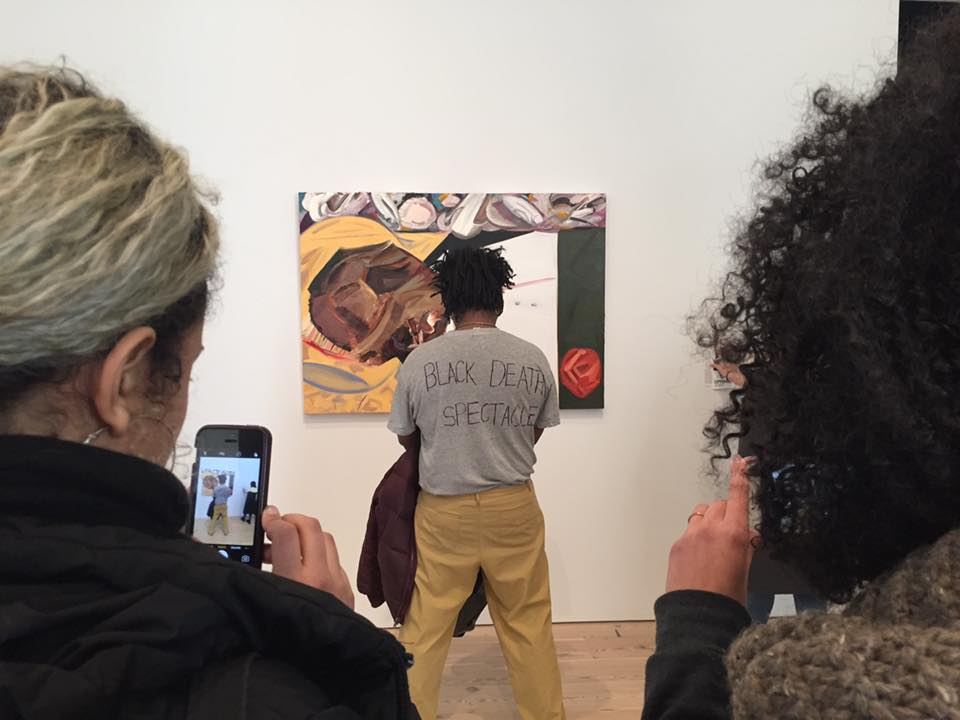 Art News has published Hannah Black’s open letter to the Whitney asking that the painting be removed. Besides the bit above, Black wrote this:

As you know, this painting depicts the dead body of 14-year-old Emmett Till in the open casket that his mother chose, saying, “Let the people see what I’ve seen.” That even the disfigured corpse of a child was not sufficient to move the white gaze from its habitual cold calculation is evident daily and in a myriad of ways, not least the fact that this painting exists at all. In brief: the painting should not be acceptable to anyone who cares or pretends to care about Black people because it is not acceptable for a white person to transmute Black suffering into profit and fun, though the practice has been normalized for a long time.

. . .Through his mother’s courage, Till was made available to Black people as an inspiration and warning. Non-Black people must accept that they will never embody and cannot understand this gesture: the evidence of their collective lack of understanding is that Black people go on dying at the hands of white supremacists, that Black communities go on living in desperate poverty not far from the museum where this valuable painting hangs, that Black children are still denied childhood. Even if Schutz has not been gifted with any real sensitivity to history, if Black people are telling her that the painting has caused unnecessary hurt, she and you must accept the truth of this. The painting must go.

To Parker Bright, Hannah Black, and other critics of this painting, I say this:

The fact is that we are all human, and we are all capable of sharing, as well as depicting, the pain and suffering of others.  I will not allow you to fracture art and literature the way you have fractured politics. Yes, horrible injustices have been visited on minority groups, on women, on gays, and on other marginalized people, but to allow that injustice to be conveyed only by “properly ethnic or gendered artists” is to deny us our common humanity and deprive us of emotional solidarity. No group, whatever its pigmentation or chromosomal constitution, has the exclusive right to create art or literature about their own subgroup. To deny others that right is to censor them.

To those who say this painting has caused them “unnecessary hurt” because it is by a white artist about black pain, I say, “Your own pain about this artwork is gratuitous; I do not take it seriously. It’s the cry of a coddled child who simply wants attention.”

As for the accusation that this painting was done for “profit and fun,” that’s a disgusting and reprehensible thing to say. We cannot allow the Culture of Offense to rule the Culture of Art. If art is to flourish in a free society, it can be criticized, but it cannot be censored.

Emmett Till was black, but his story belongs to all of us.