My amiable and gracious hosts in Rotorua are Geoffrey Cox, a terrific artist who specializes in natural history (website here, more on his art later) and his wife, Barbara Hochstein, a crack radiologist. Today (Monday) Geoffrey took me to—among other places—the Wingspan National Bird of Prey Centre in Rotorua, New Zealand. The goal was to see the raptors, but especially the New Zealand falcon or kārearea (Falco novaeseelandiae), the only falcon in New Zealand and the country’s only remaining endemic dirurnal bird of prey (there’s one species of owl left, but all other daylight hunters have gone extinct save the swamp harrier, which is found in other places).

The Centre is not a zoo: its goal is to rehabilitate injured birds of prey, to breed them and introduce them back into the wild and, if an injured bird can’t be set free, to use it for breeding and for educating the public. They take their mission exceedingly seriously, and I was quite impressed.

Male and female falcons are quite dimorphic, with females larger (the male weighs about 2/3 as much as the female). I don’t know the explanation for this size difference, but it’s is seen in other New Zealand birds, like some of the extinct moas. If you know the explanation, please put it below!

Here’s a picture of the size difference between female (left) and male from the classic Buller’s Birds of New Zealand: 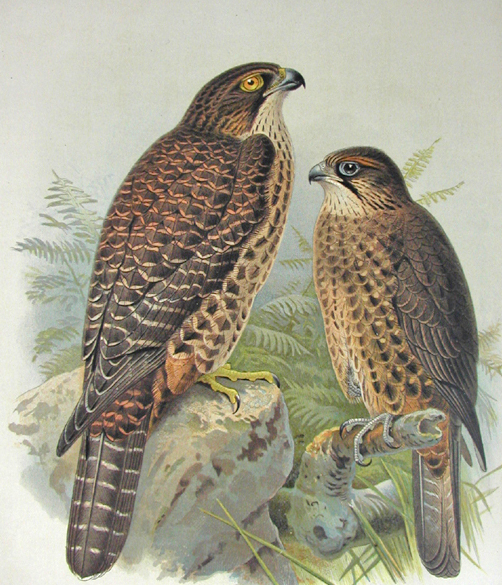 The falcons are seriously endangered, with far fewer falcons than kiwis living in New Zealand. One of the factors reducing the population of these birds is their habit of nesting on the ground, characteristic of many birds in New Zealand (there were no mammalian or reptilian predators to destroy eggs before humans arrived, and nesting in trees has its dangers).

The falcon’s closest living relative, according to Wikipedia, is the South American Aplomado falcon (Falco femoralis).

To train birds to hunt in the wild before release, they are handled and trained by a falcon expert—one person per bird—and are flown every day. (I was told that without daily flying, in three days they’ll revert to being totally wild.) Today they were flying a young male, and they did a great demonstration.

Look at this lovely bird! 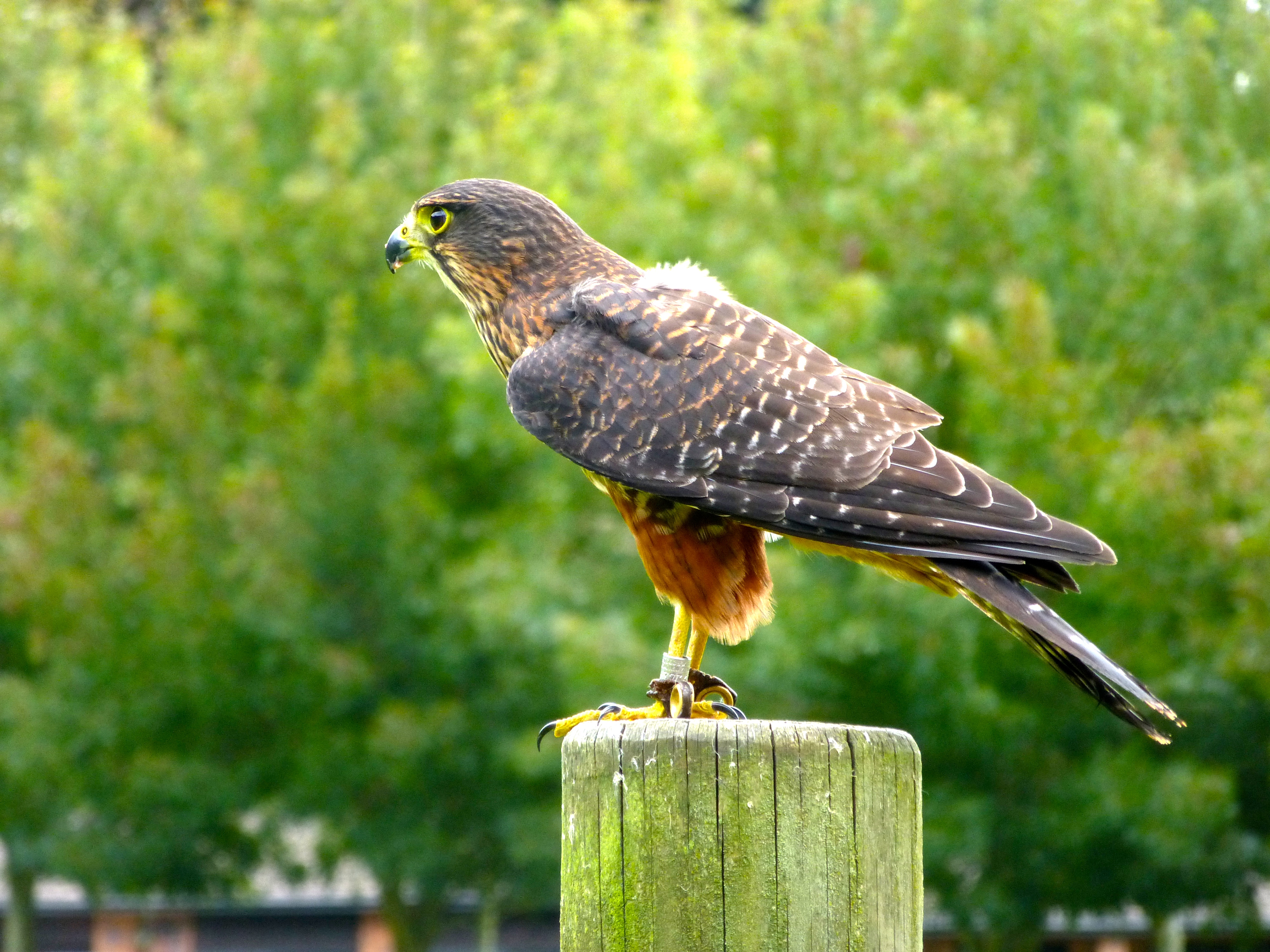 Below: male photographed on the handler’s gauntlet. The bird has huge eyes, like the peregrine falcon (whose eyes are as large as a human’s), and can apparently see eight times better than we. As a display in the Centre noted, a person in a car can read a license plate on a car 50 meters ahead, but a falcon can read a plate (if it could read!) 400 meters ahead.

The handler let the bird go, and he flew out of sight into the trees in the distance, spooking a bunch of sparrows on the way. We couldn’t see him at all, but he could see us, for as soon as the handler raised her glove or put out a lure, the bird came winging back. 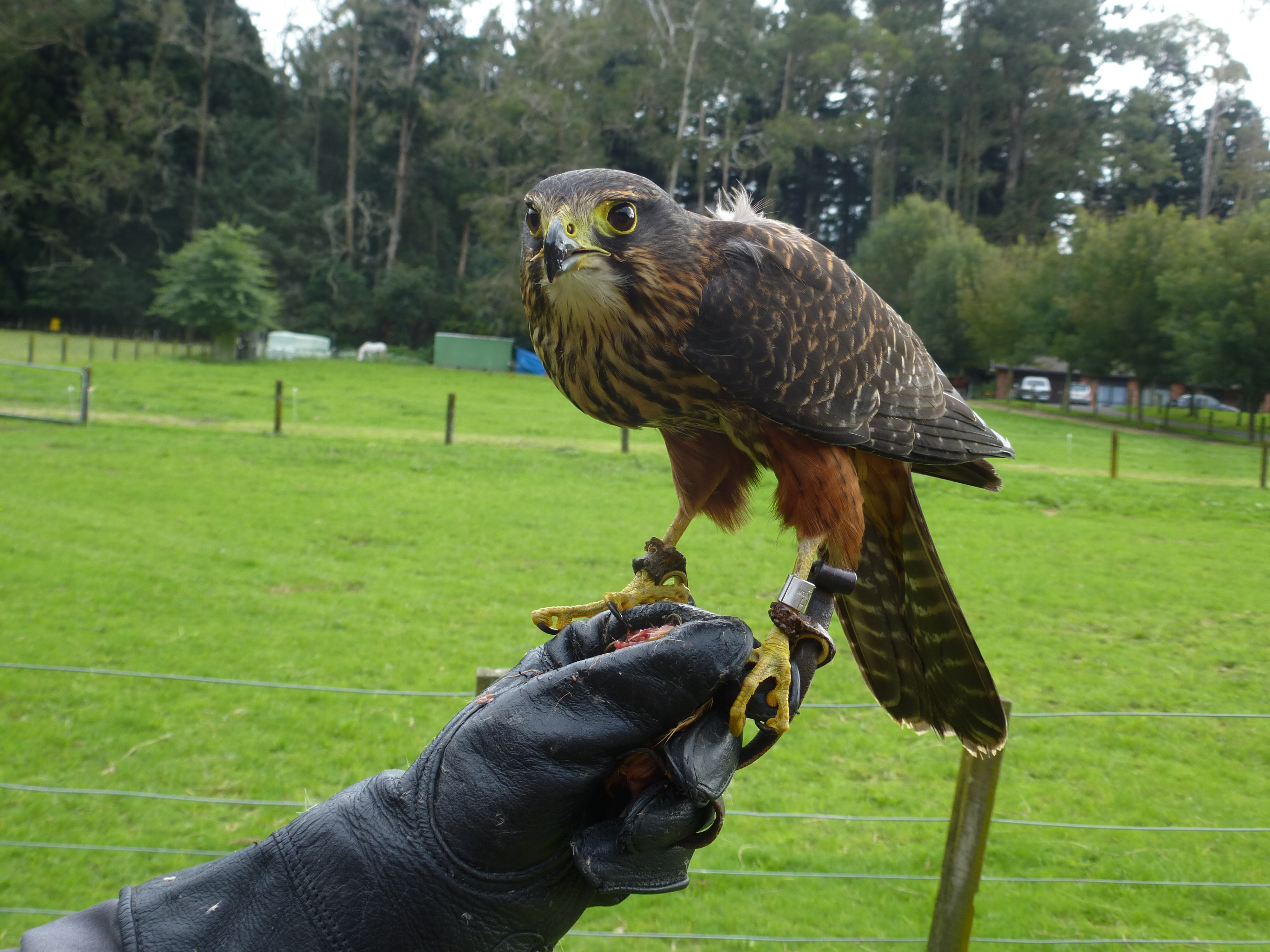 Falcon training with a lure: 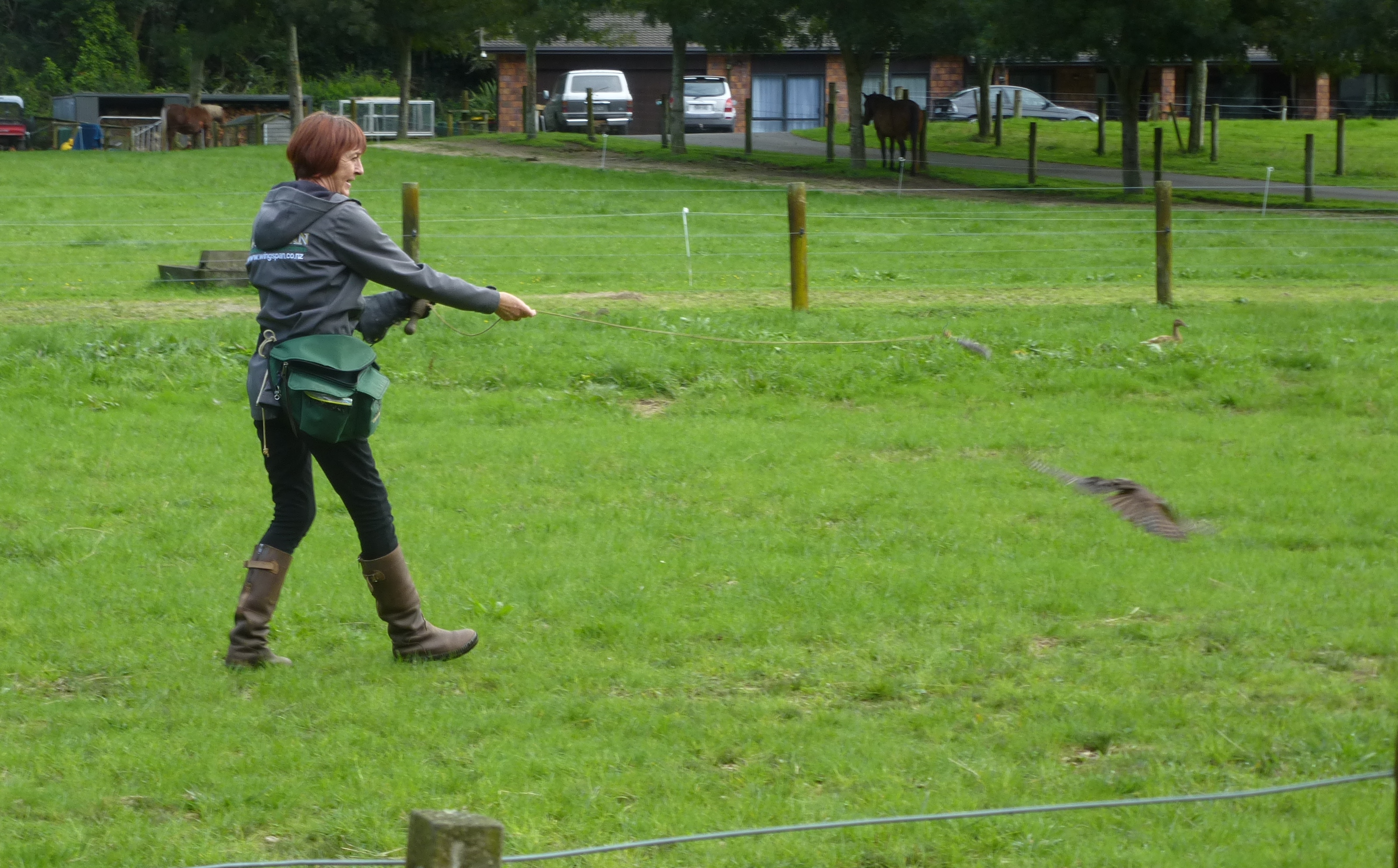 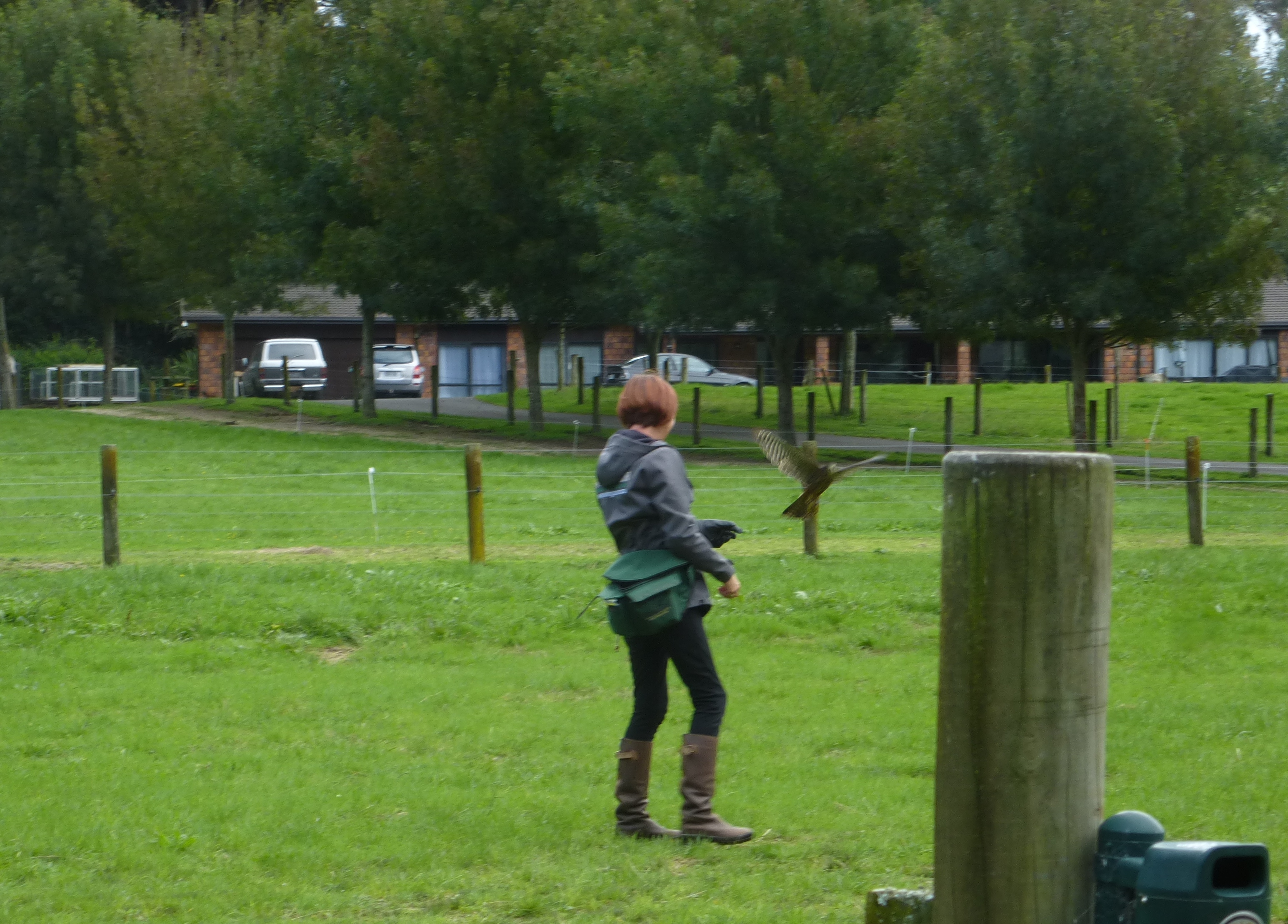 The bird can, from a long distance away, spot a tiny piece of meat placed atop a fencepost. It comes in low at a glide, a foot or so above ground  level, and then glides up to the post, using gravity and extended wings to help it stop. 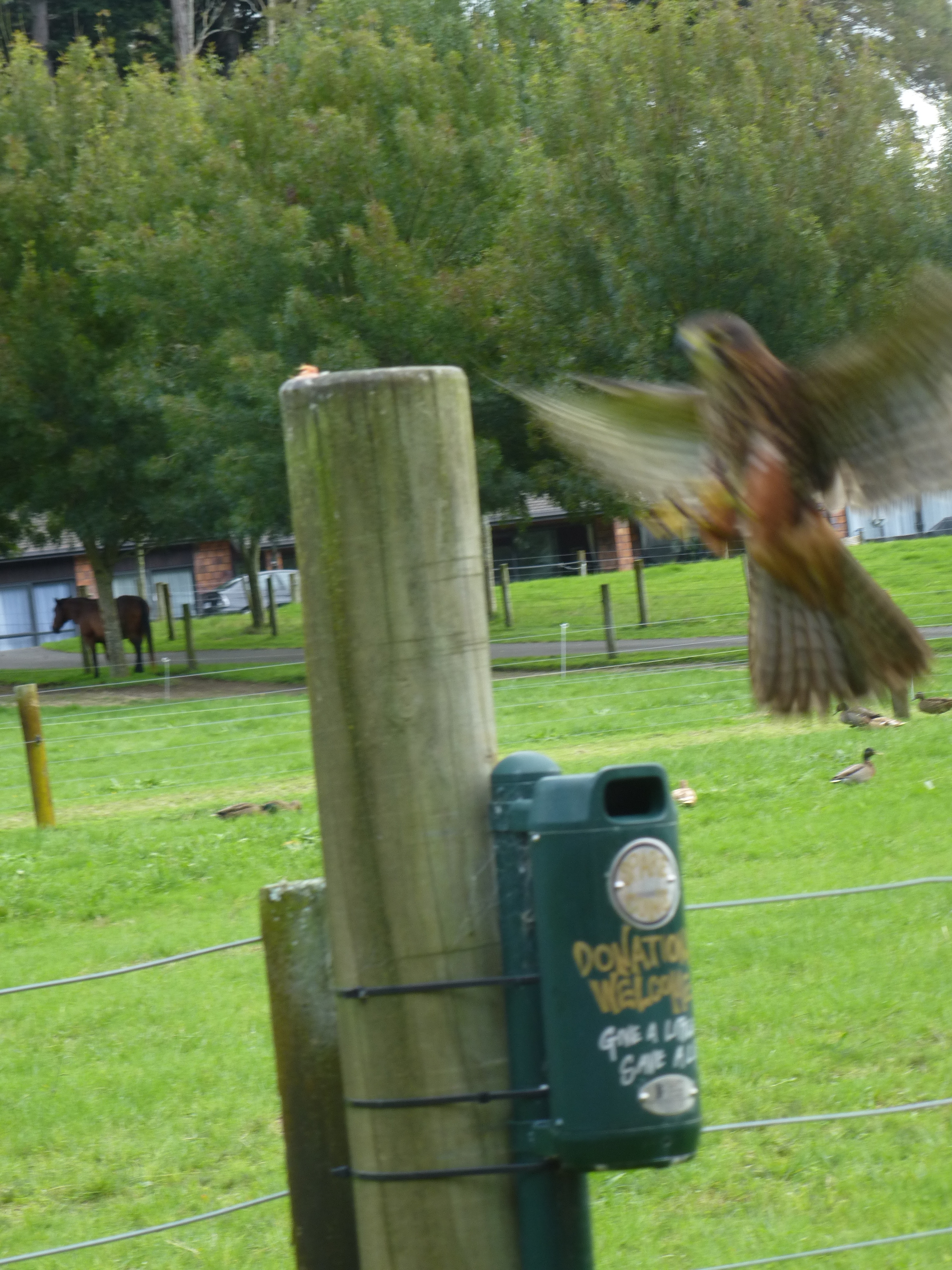 Several children were asked if they wanted to hold the falcon, and nobody wanted to; but after a little girl volunteered, they all wanted to. 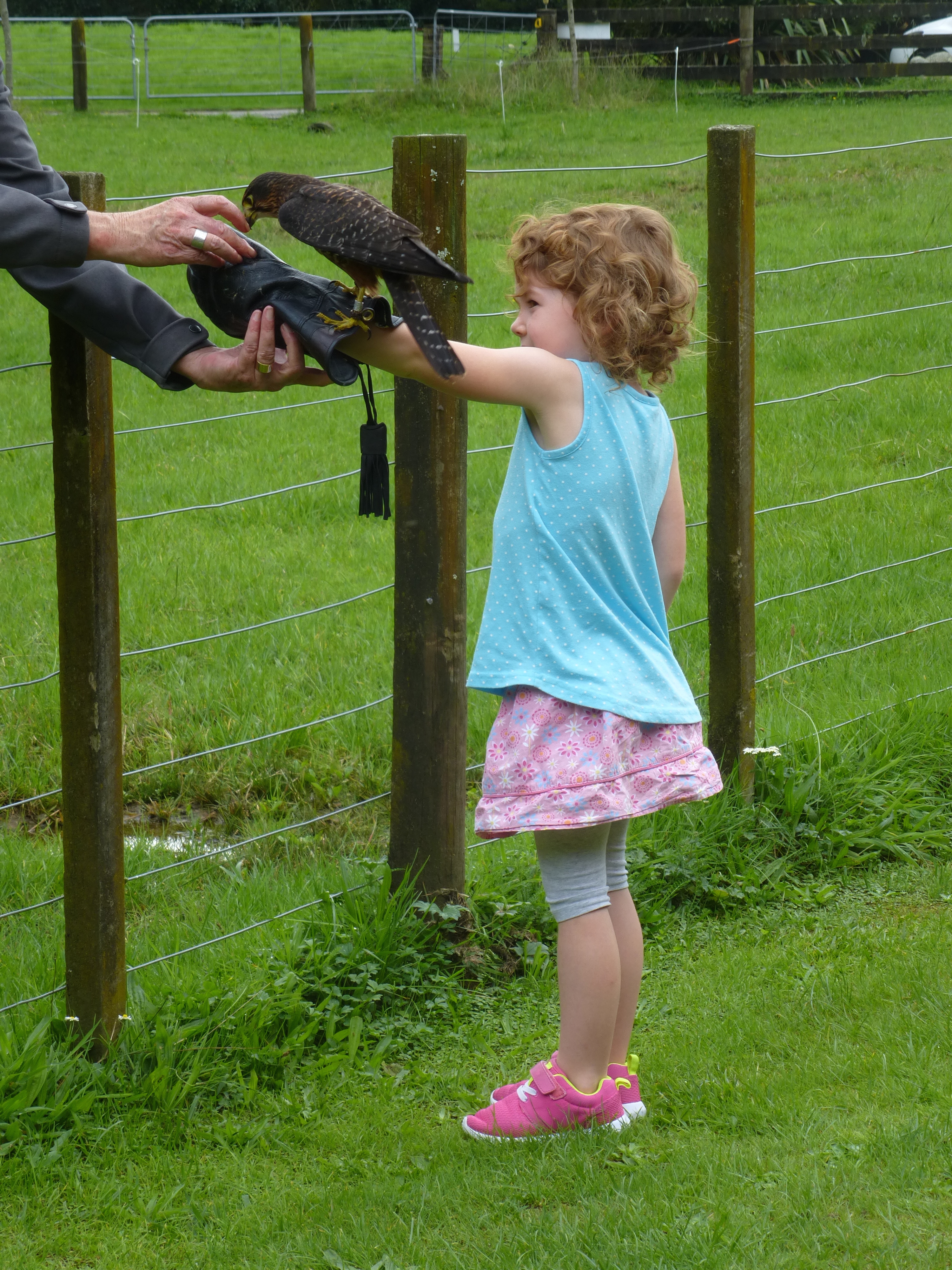 They then asked for adult volunteers, and of course I shouted, “Me, me, me!” Here’s the highlight of my day (and one of the highlights of my life), with the photo taken by Geoffrey. The bird also landed on my arm, but the talons didn’t hurt. 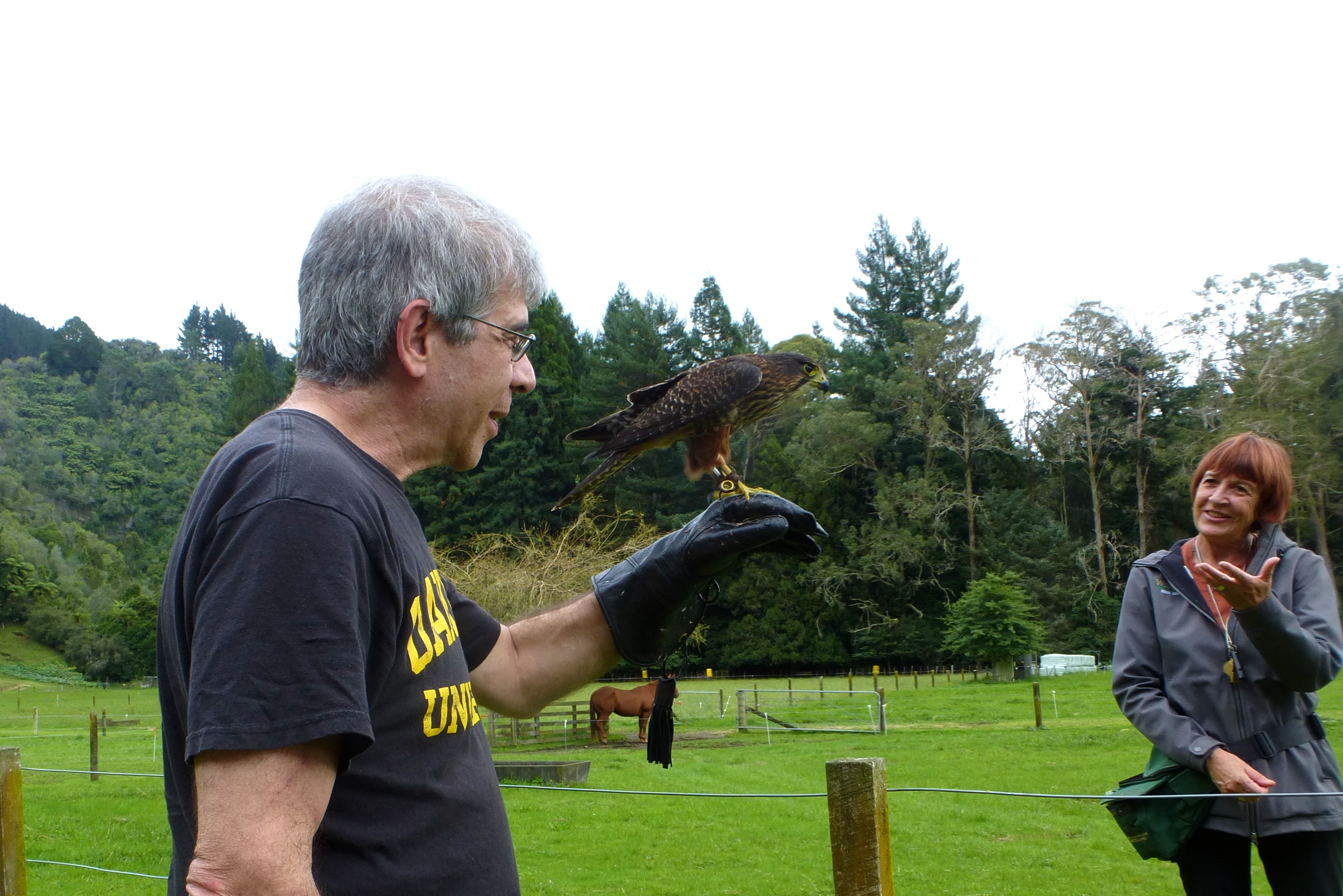 This is a bigger female awaiting her turn to fly: 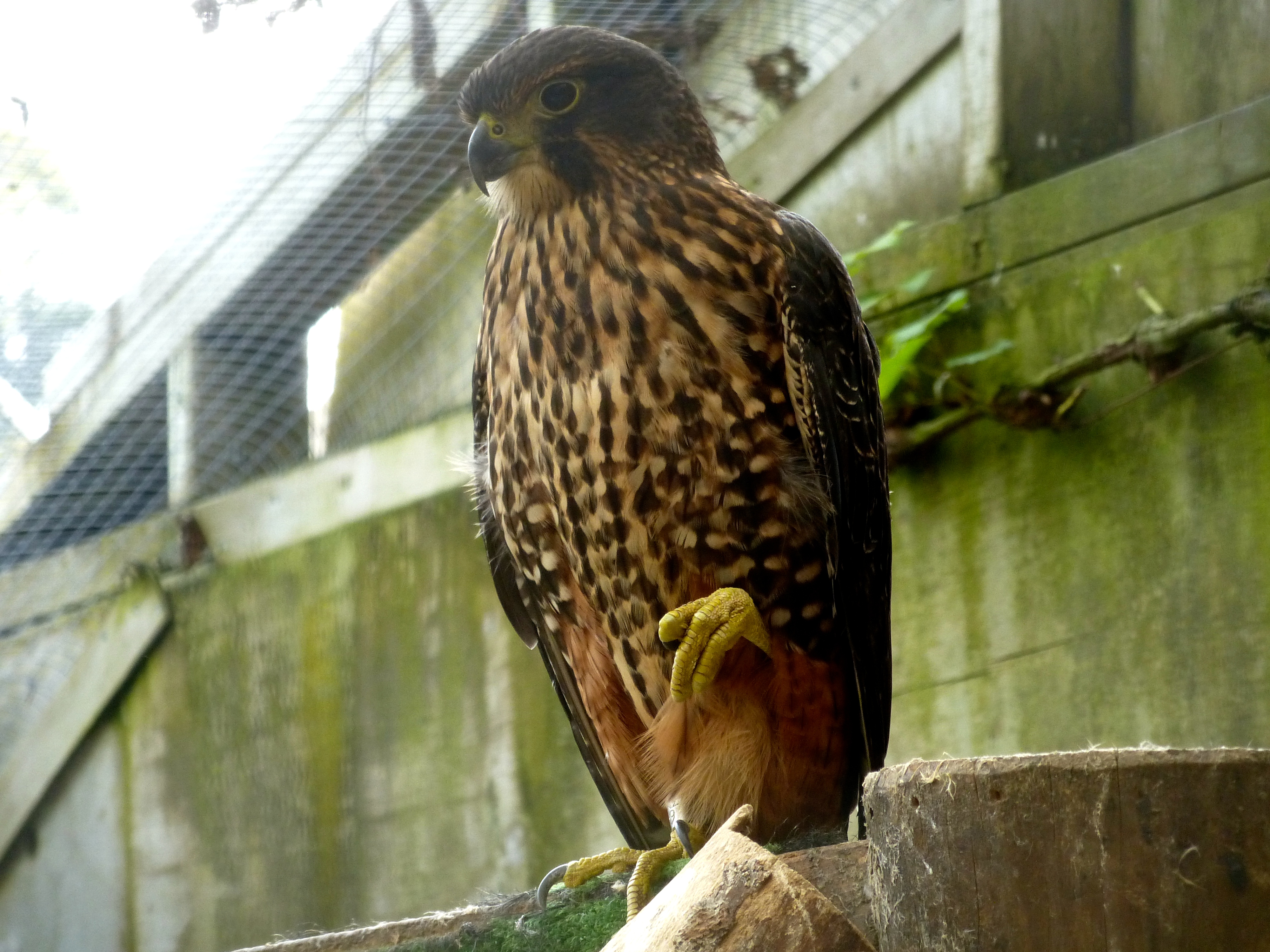 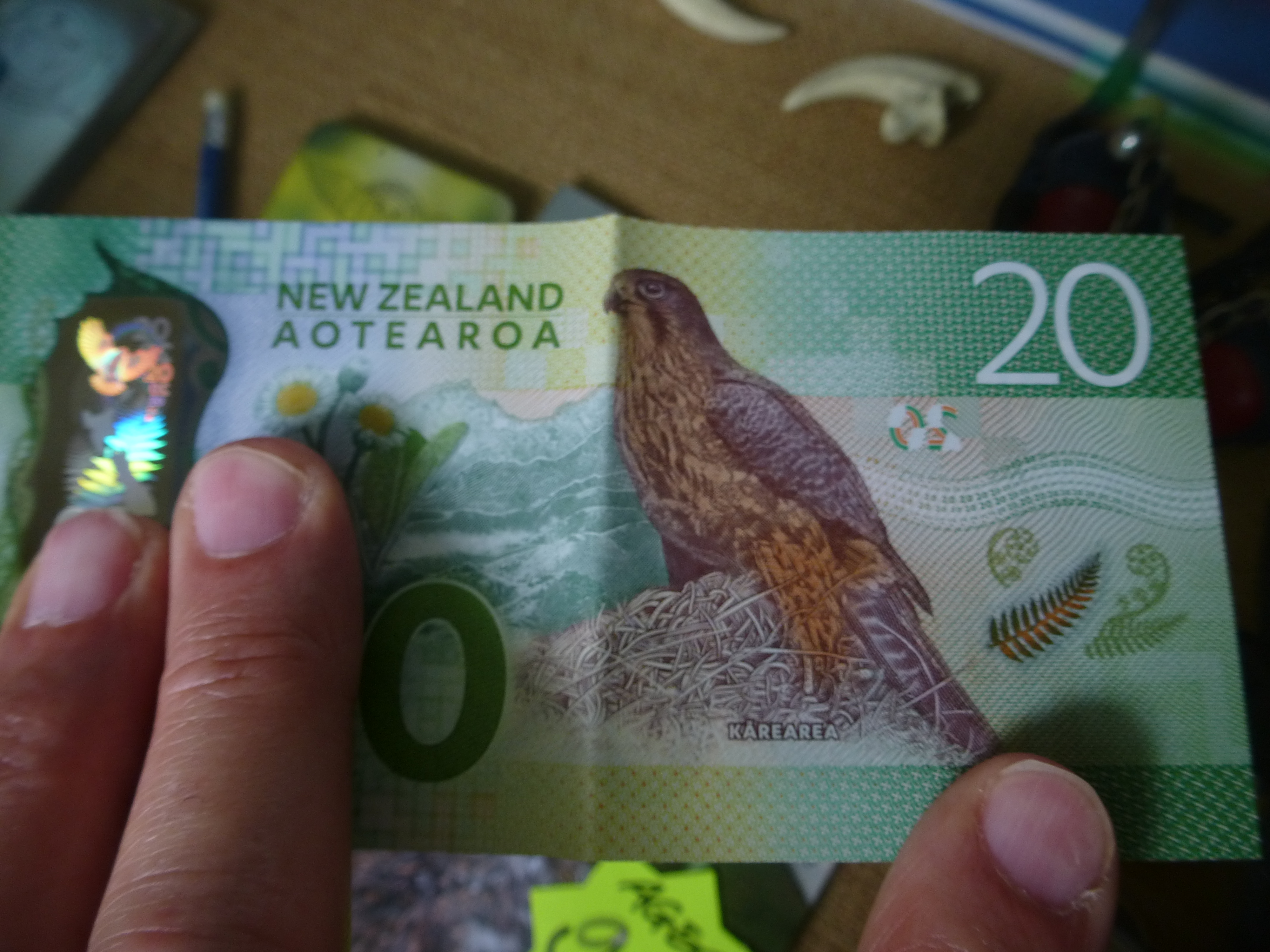 And they told us this is the exact female whose portrait was used for the note above: 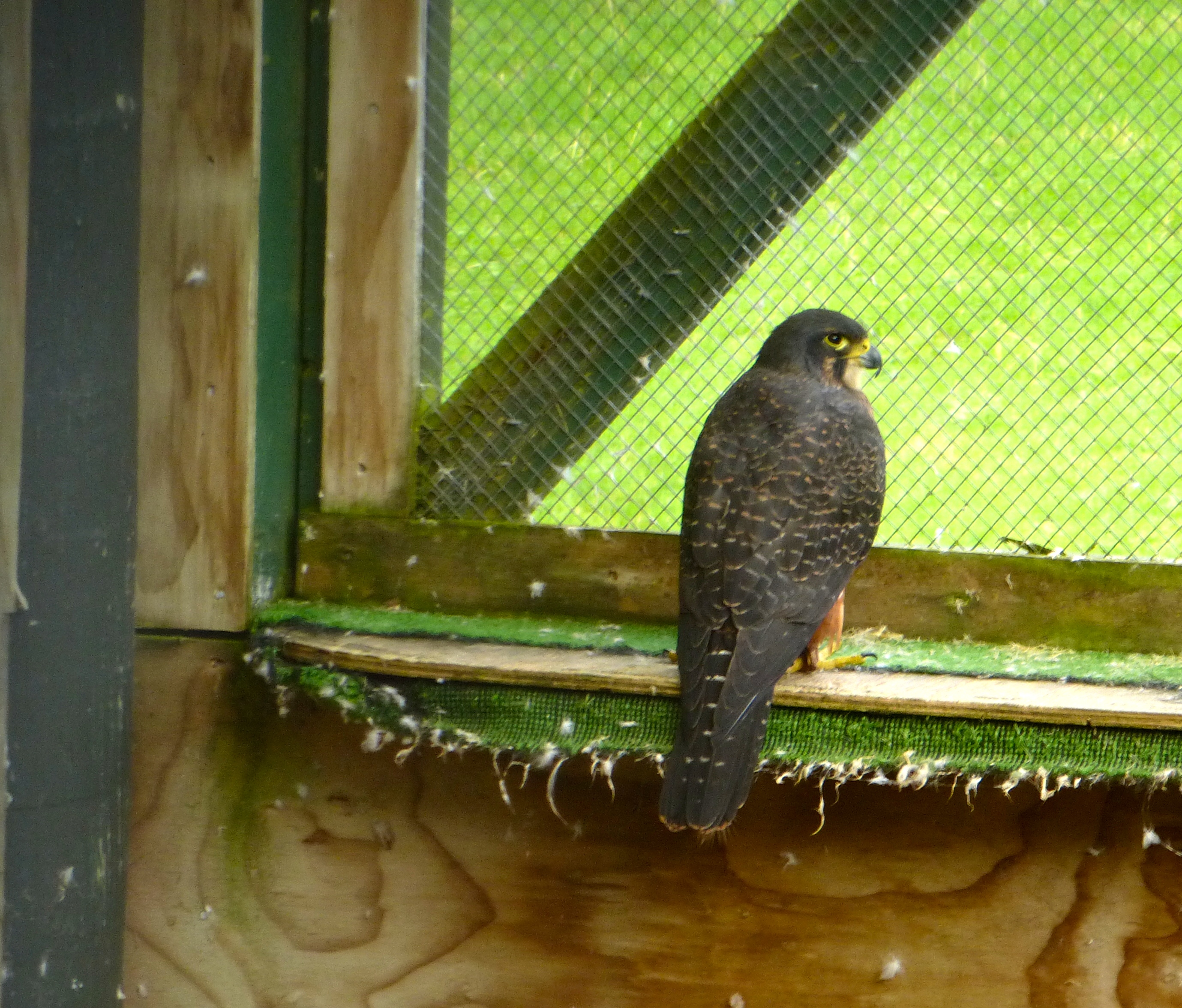 Here’s a feathered skeleton of a New Zealand falcon attacking a blackbird. 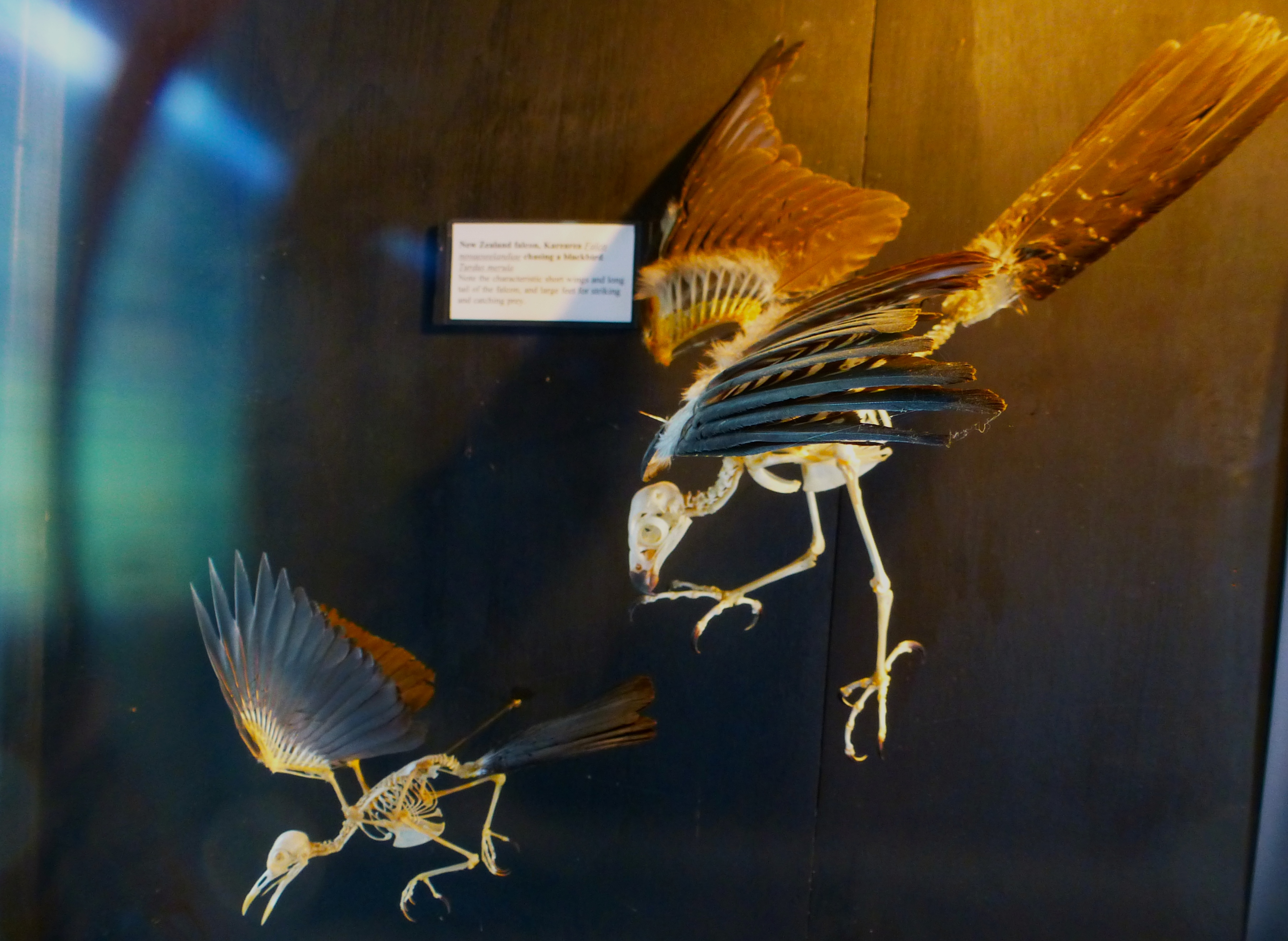 New Zealand used to have two native owls in historical memory. Sadly, the laughing owl (Sceloglaux albifacies), or whēkau in Maori, was extinct by 1914 due to hunting, deforestation, and predation on eggs and young by introduced rats and stoats. The remaining owl, of which there was one in the Centre, is the morepork (Ninox novaeseelandiae), also found in Tasmania: 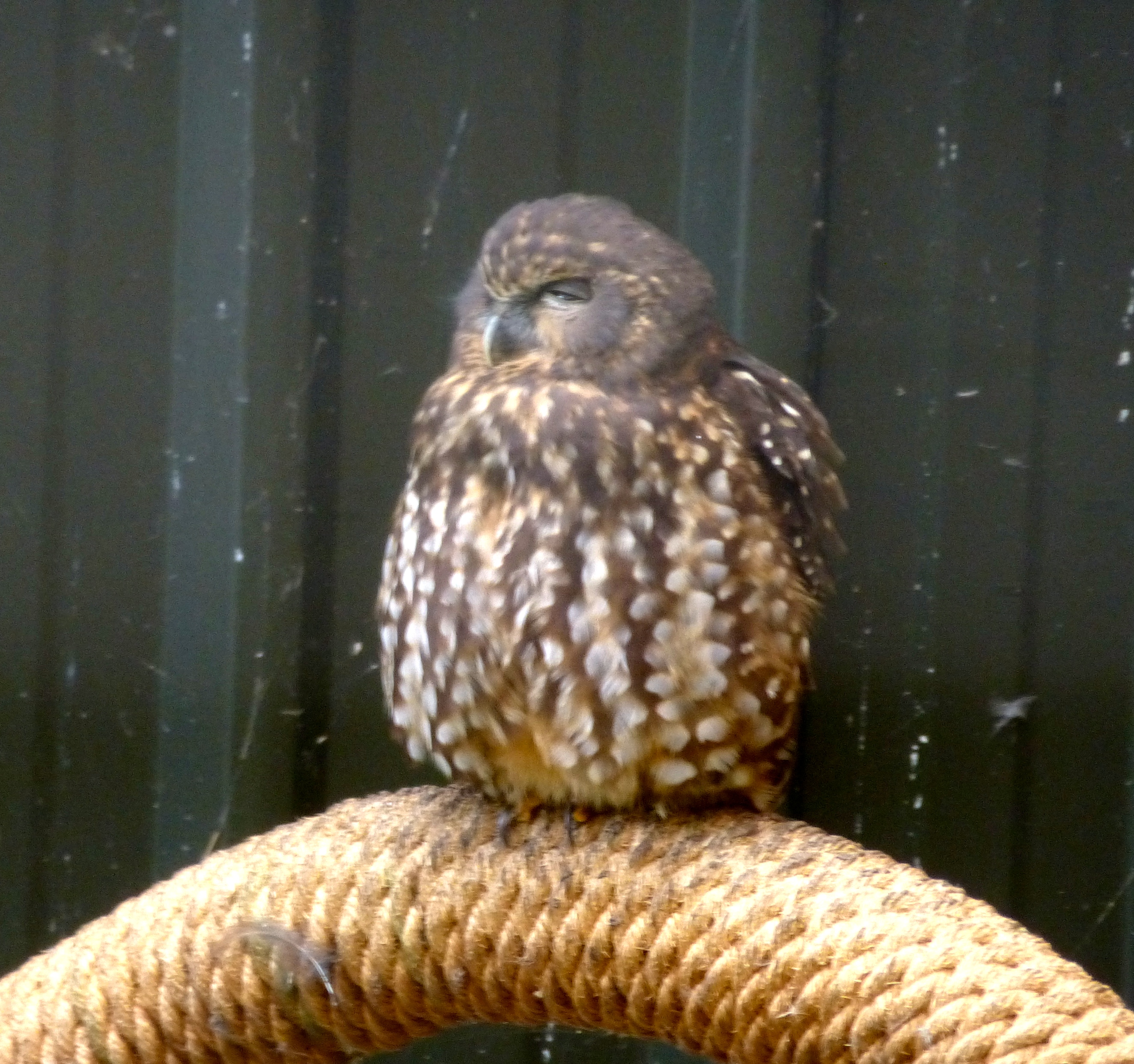 Geoffrey has a particular interest in the extinct moas and their predators, and perhaps their main predator was Haast’s eagle (Harpagornis moorei), a monstrous raptor with a wing span of 2.5-3 meters and a weight of up to 15 kg.

Here’s Geoffrey with a silhouette of a Haast’s eagle. He’s made models of both moas and parts of this raptor; I’ll show those in subsequent posts.

Although moas were larger than Haast’s eagles, the big flightless birds were easy prey. Here’s Wikipedia‘s description of an attack:

Haast’s eagles preyed on large, flightless bird species, including the moa, which was up to fifteen times the weight of the eagle. It is estimated to have attacked at speeds up to 80 km/h (50 mph), often seizing its prey’s pelvis with the talons of one foot and killing with a blow to the head or neck with the other. Its size and weight indicate a bodily striking force equivalent to a cinder block falling from the top of an eight-story building. Its large beak also could be used to rip into the internal organs of its prey and death then would have been caused by blood loss. In the absence of other large predators or scavengers, a Haast’s eagle easily could have monopolised a single large kill over a number of days.

And a reconstruction of the eagle attacking moa. 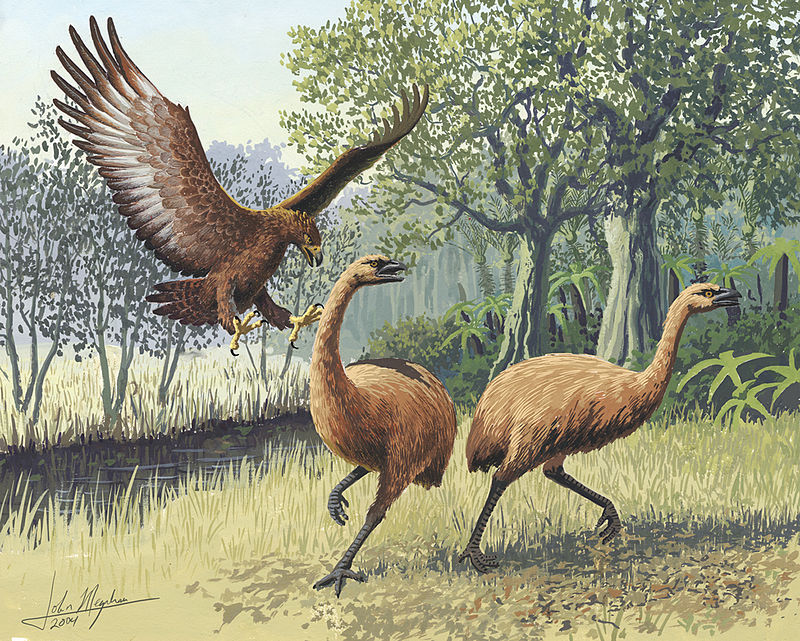 The eagles died out about the same time as the moas: about 1400 AD. The moas were driven to extinction by Maori, who craved their meat; and without prey the eagle couldn’t survive.

UPDATE: Reader David Coxill sent me two swell photos related to the above (but in another country), and a description:

Your latest piece about the New Zealand Falcon reminded me of our visit to the Lakeland Bird of Prey Centre in Cumbria .
The Falconer asked if any one wanted to let a bird land on their arm . This little girl volunteered, and I managed to get a photo of the bird just landing on the glove . 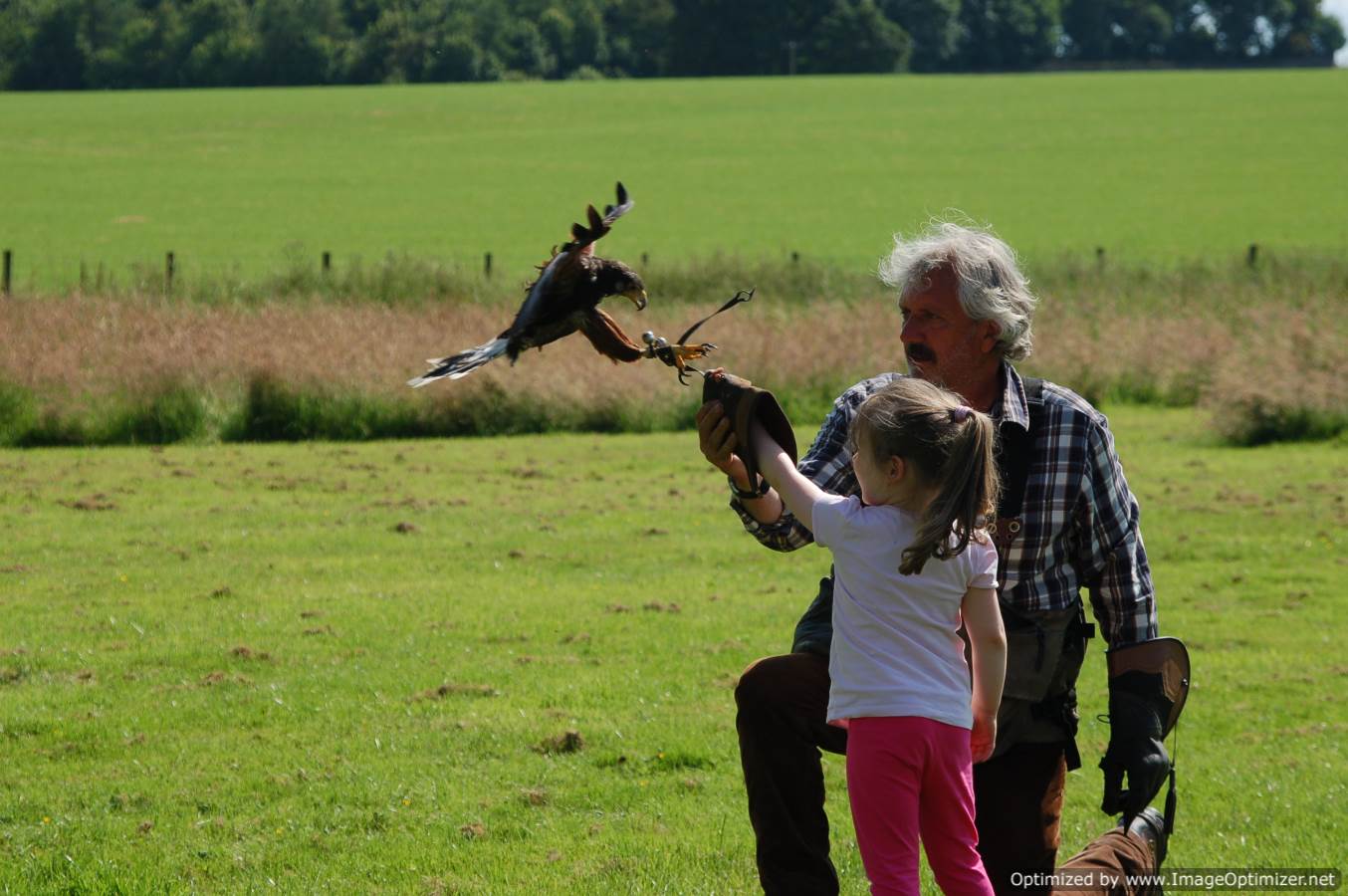 I think the bird involved was a Red Tailed Hawk [Buteo jamaicensis].

The falconer at work: a man happy in his job . 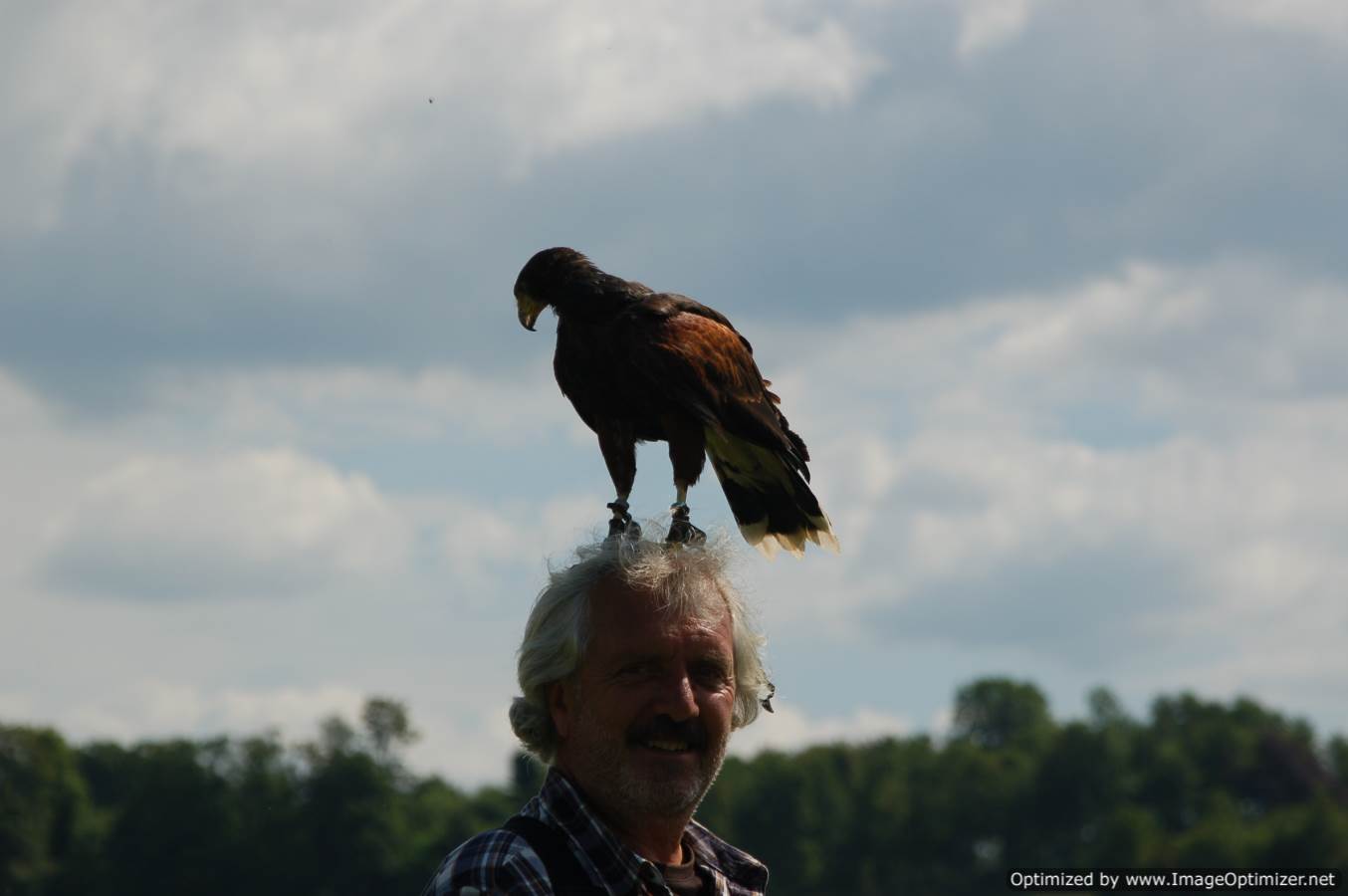 54 thoughts on “Rotorua: falcons and other birds”