I’ve never been a big fan of the American Association for the Advancement of Science: they are too soft on faith, and in fact include a Templeton-founded program, Dialogue on Science, Ethics, and Religion (DoSER), whose goal is reconcile science and evolution with religion–largely Christianity (the program is headed by an evangelical Christian astronomer; see here, here, and here).. The DoSER program outrages me because a science organization shouldn’t be promoting a particular theological view (accommodationism). I have never joined the AAAS and never will.

Now, with the Science March in the offing, the AAAS is using it to swell membership and get money. Nearly every day I get an email ad from them asking you to join to support science (no way, AAAS—not till you ditch the faith-osculation) and to buy stuff from them. Here’s the latest: 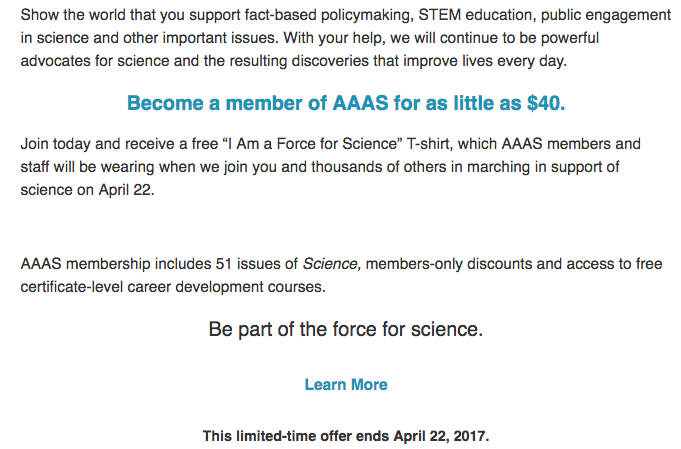 I’m sorry, but this just strikes me as venal, especially because I get these inducements almost every day. The ads didn’t start appearing until the Science March was announced, so they’re clearly connected to that.

I am part of the force for science, but I’m not giving my dosh to an organization that also coddles religion, and that piggybacks on a march organized by others to swell its membership. It’s fine if the AAAS sponsors the Science March, but, as I said the other day, the aims of the Science March aren’t even clear.