FURTHER UPDATE FROM THE BBC (Sadly, the policeman, and two others hit by the vehicle, have died. GCM):

One woman has died and many people were injured, the British Press Association reported, in what police are treating as a terrorist incident at the Houses of Parliament.

“Officers — including firearms officers — remain on the scene and we are treating this as a terrorist incident until we know otherwise,” police said.

A female has been recovered from the River Thames alive but with injuries, a Port of London Authority spokesman told CNN.

Images showed a car crashed into the perimeter gate of Parliament, and witnesses later told CNN that they had seen the vehicle mow down pedestrians.

David Lidington, leader of the House of Commons, also reported a stabbing.

“It seems that a police officer has been stabbed, that the alleged assailant was shot by armed police,” he said.

There were either one or two terrorist attacks today outside Parliament and on Westminster Bridge nearby. A policeman was stabbed, not fatally, and the assailant shot and killed (apparently British police near Parliament are armed). At least one of the five pedestrians deliberately struck by a speeding car has died.

I am calling this a “terrorist attack” because a.) the British police are calling it that and b.) it’s the first anniversary of the Brussels bombings. I don’t like to rush to judgment when this kind of thing happens, but this time I’ll predict it’s the hand of Islamic terrorism. You can read the New York Times report here. An excerpt:

LONDON — Britain’s Parliament was placed on lockdown on Wednesday, plunging the country’s seat of power into turmoil, after an assailant stabbed a police officer outside the building before he was shot, and a motorist on an adjacent bridge plowed over at least five pedestrians, killing at least one.

The Metropolitan Police described the attack as a “a terrorist incident,” but many details, as well as the sequence of events, remained unclear. Security officers shot the assailant outside Parliament. But it was not yet known whether the assailant was the same person who ran over the pedestrians on the bridge. The police also responded to reports of a person in the River Thames.

. . . Ambulances and other emergency vehicles thronged the scene, and helicopters flew ahead, as one of the busiest sections of London was cordoned off and evacuated. The Westminster station on the Tube, London’s subway system, was closed. Prime Minister Theresa May was rushed into a vehicle and spirited back to her office, where her aides reported that she was safe.

A map from the NYT: 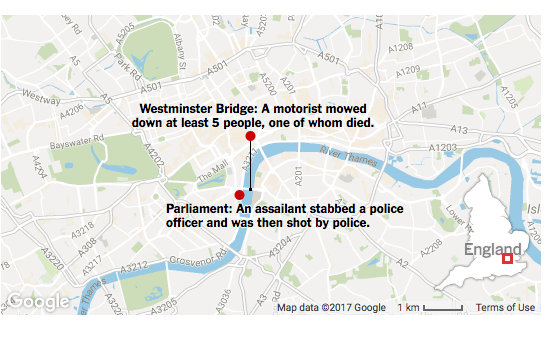 And a tweeted picture Grania sent me, just in:

#BREAKING: First photo of the reported terrorist from the #London Attack. Picture via @MailOnline pic.twitter.com/5dfMhU8U8p

You know this is going to happen in the U.S. sooner or later, and it will be awful when it does—not only for the innocent people killed or injured, but for the backlash on peaceful Muslims that will ensue when Donald Trump claims he was right all along. I have no idea how it will play out when it happens, but if you want to see true Islamophobia—bigotry against Muslims—be whipped into a frenzy by our President, that will be the time.

As for these incidents, is this the price we must ultimately pay for relatively open immigration, or is there anything we can do? I ask readers for their response. And don’t tell me that handguns kill a gazillion more people in the U.S. than do Muslim terrorists, which of course is true; that is not the issue I’m talking about, and I’ve had my say on guns. Remember, this is a problem not limited to America, not by a long shot.