Talk about Schadenfreude! As I’ve written recently, Reza Aslan is the host of a new six-part CNN show, “Believer,” billed as a “spiritual adventure journey.” It premiered Sunday, and though I didn’t see it (and won’t), it has been touted as showing that at bottom all faiths are the same. (Of course that’s nonsense.) Given Aslan’s history as the Religious Osculator in Chief, I’m pretty sure that no religion will receive the least amount of criticism. But that didn’t stop critics for calling him out for racism, colonialism, “Hinduphobia”, and other macroaggressions.

Aslan is a whitewasher of religion in general and Islam in particular, so you would think that he’d be beloved of the Regressive Left. But then you’d underestimate their capacity for outrage and purity tests. Aslan, apparently, just failed a purity test in the very first episode of “Believer”, at least judging by Vamsee Juluri, writing at that Arbiter of Moral Purity, HuffPo.  Juluri calls his piece “CNN’s ‘Believer’ is reckless, racist, and dangerously anti-immigrant“. Those are strong words, guaranteed to draw a vigorous exculpatory response from the thin-skinned Aslan. After all, it makes Aslan seem like Trump!

Further, Juluri’s judgment is based solely on the promo for the show, which you can see by clicking on the screenshot below: 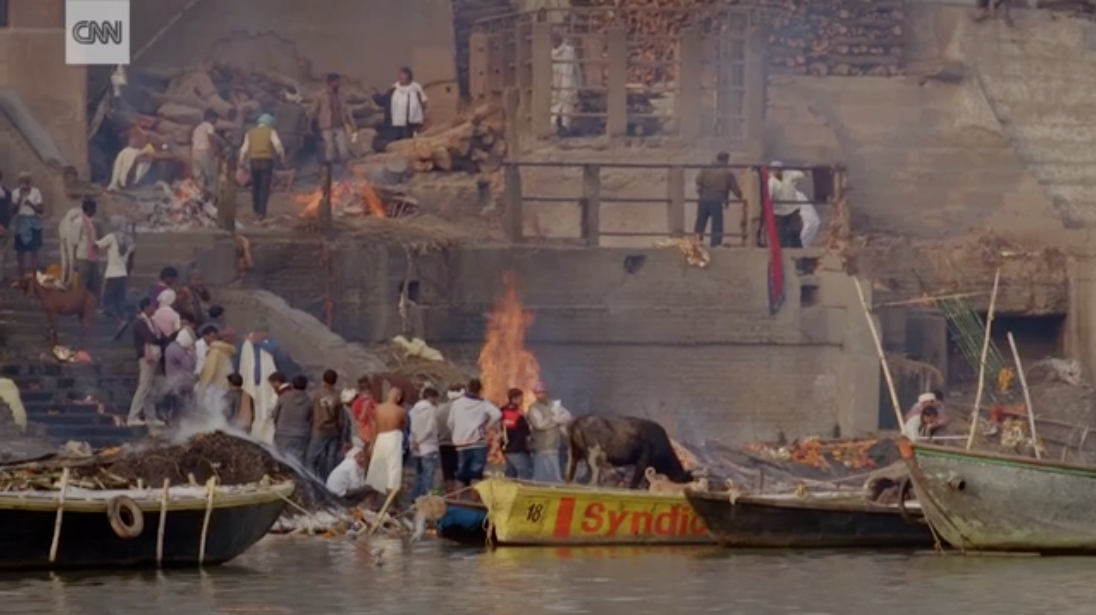 What is Juluri’s beef with the show? The promo, he says, pushes a narrative of brown people obsessed with death and cremation at a time when all brown people, or at least Indians, should be portrayed positively. After all, there have been recent shootings of Hindus and Sikhs in America, and though Aslan couldn’t anticipate that, Juluri says that this episode shouldn’t be aired at “this fraught and sensitive time.” He also accuses CNN of perpetrating a racist view of Indians, and even accuses Aslan of portraying Indians as a “world menace.” Here are some direct quotes from the HuffPo piece:

Aslan is hoist with his own petard! But seriously, although I hate to defend his unctuous behavior, this accusation is over the top. I seriously doubt that this PROMO will lead to the demonization of “brown people in America.” But it still amuses me that, try as he might, Aslan can’t satisfy some of his leftist critics.

I was also interested to see that, contrary to my expectations, the show has not been favorably reviewed by mainstream media. The L.A.Times, for instance, called its review “CNN’s ‘Believer with Reza Aslan’ could use a little more enlightenment itself.” Noting that the show is aimed at dispelling misconceptions about minority religious sects (e.g., the Aghori of India, Haiti’s Voodo “faith,” a Hawaiian doomsday cult), the Times finds the presentation far too sensationalistic:

But “Believer” doesn’t offer as much enlightenment as its title and premise might suggest. The main problem here is that some of the chosen believers in the first few episodes are ultimately unbelievable.

Many of the groups and leaders featured here are so fringe that their bizarre philosophies and theatrics distract from Aslan’s main mission — to demystify lesser understood faiths and find a commonality that makes us all believers in something.

. . . As a host, Aslan is charismatic. But in order to make “Believer” more believable, the show needs to stop trying to shock and, like [Anthony] Bourdain does with his series, find the extraordinary in the most ordinary of people and moments.

Well, it’s too late for that, for all the episodes are already in the can. And it’s even grosser than the Times noted, for the Washington Post reports that Aslan ate human brain tissue in Varanasi, and then had poo flung at him! That caused him to be excoriated for “Hinduphobia”. The Post‘s excerpt is amusing, implying that Aslan is more after shock value more than religious osculation:

Religion scholar Reza Aslan ate cooked human brain tissue with a group of cannibals in India during Sunday’s premiere of the new CNN show “Believer,” a documentary series about spirituality around the globe.

The outcry was immediate. Aslan, a Muslim who teaches creative writing at the University of California at Riverside, was accused of “Hinduphobia” and of mischaracterizing Hindus.

“With multiple reports of hate-fueled attacks against people of Indian origin from across the U.S., the show characterizes Hinduism as cannibalistic, which is a bizarre way of looking at the third largest religion in the world,” lobbyist group U.S. India Political Action Committees said in a statement, according to the Times of India.

In the episode, Aslan meets up with a sect of Indian religious nomads outside the city of Varanasi in the northern state of Uttar Pradesh. The Aghori, as they are known, reject the Hindu caste system and the notion of untouchables, and espouse that the distinction between purity and pollution is essentially meaningless. In the Aghori view, nothing can taint the human body, Aslan said.

“Kind of a profound thought. Also: A little bit gross,” said Aslan, whose bestselling books on religion include “Zealot: The Life and Times of Jesus of Nazareth.”

The Aghori persuade Aslan to bathe in the Ganges, a river that Hindus considers sacred. An Aghori guru smears the ashes of cremated humans on his face. And, at the Aghori’s invitation, Aslan drinks alcohol from a human skull and eats what was purported to be a bit of human brain.

“Want to know what a dead guy’s brain tastes like? Charcoal,” Aslan wrote on Facebook. “It was burnt to a crisp!”

It’s a good thing this wasn’t in New Guinea, where Aslan could risk getting kuru from eating human brains. The Post continues:

At one point, the interview soured and one cannibal threatened Aslan: “I will cut off your head if you keep talking so much.” Aslan, in turn, said to his director, “I feel like this may have been a mistake.”

And when the guru began to eat his own waste and hurl it at Aslan and his camera crew, the CNN host scurried away.

“Pretty sure that was not the Aghori I was looking for,” he said.

The fact is that not all religious sects are lovable, and I guess Aslan found a few that don’t appeal to the liberal believers of America.

55 thoughts on “The Left eats its own again: Reza Aslan becomes Witch of the Week for his new television series”