It’s amusing—though sad—to see Leftist after Leftist confect arguments why free speech isn’t what it’s cracked up to be. Isn’t the Left supposed to defend freedom of speech? Sadly, much of that side seems to have abandoned the principle—mainly because they want to suppress what they call “hate speech.” That of course is a dangerous argument, for one person’s “hate speech” (say, criticism of abortion, affirmative action, or Islam) is another person’s free speech—and who is to be the arbiter of which is which?

Nevertheless, the Left persists in its attacks, and now we have a new argument by Mike Sturm at Coffeelicious (reprinted at Medium.com, a venue almost as Regressive Leftist as Puffho). Here’s the title; click on the screenshot to go to the piece—an argument that free speech is overrated: 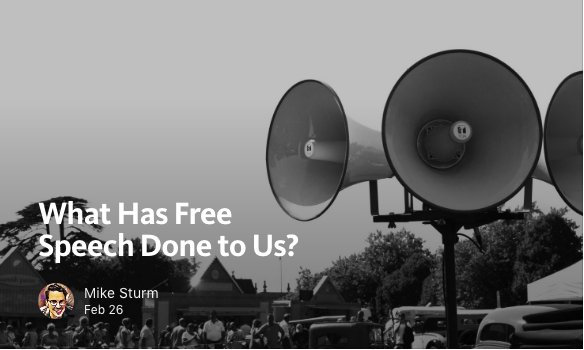 I’ll let Sturm give the argument himself (indented):

So here I am asking two questions:

The Proposed Value of Speech

In the world of liberal democracy, freedom in general is a cornerstone value of any society. People ought to be free to live their lives in the best way they see fit — with as little interference as possible. In the case of speech, I think that the reasons that we value free speech fall into two basic categories:

I think that the article of faith, especially in America, for the past 200 years or so has been that both of these aims work together. We have blindly believed that expressing how you feel and what you want end up effectively driving change and giving power to your words, and to you, the speaker. But I see very little reason to believe this.

In fact, I believe that expressing yourself as freely as possible tends to diminish the ability of your words to drive real change.

Now why on earth would expressing yourself freely reduce your effectiveness at creating social change?  He claims that the power of speech derives from both the way it’s enforced (as through law of physical force), and through the power of speech “due to its message and its delivery.” Sturm doesn’t say much about power, but is really concerned with “how you deliver the message.” And, he claims, advocates of free speech tend to deliver their message in maladaptive ways.

What ways are those? They include these (these bullet points are mine):

“The more your message is expression — of your feelings, desires, or other emotion, the less likely it will be received by those who have reason to fear it. Just think of how much you have gotten done by yelling and venting your frustration at people, as opposed to sitting them down, and trying to make your point calmly. The more you frame your speech as expression, the less effective it will tend to be at achieving any other goal aside from expressing your feelings.”

But that’s not exactly right. True, when you’re arguing about facts you should deal with the facts and the issues, and avoid “yelling”, but to leave out emotion and feeling from a speech is to emasculate it (was that misogynist?). Think of one of the most powerful and effective speeches in American history: Martin Luther King’s “I have a dream” speech of August 28, 1963. That speech is full of emotions about the moral inequity of segregation. It is by no means calm, but was delivered in the emotional cadences of a Southern preacher. It is the quintessential speech of expression: and it’s not too much to say that it galvanized the nation, leading to the Civil Rights Act of 1964.  What Sturm is doing is equating “expression” with “yelling,” when in fact they need not be the same thing at all.  It’s arguments like this that make me wonder if Sturm has really thought about the issue. Nobody equates “free expression” with “yelling at one’s opponents,” except perhaps Sturm.

Now Sturm is correct that you can’t convince people to change their minds about issues without giving them reasons to think, and that simply demonizing your opponent as stupid, racist, or misogynist won’t work. But presenting stories, experiences, and an emphasis on moral issues (which don’t count as “reasons” but can resonate with the values of the listener) are valid ways of emoting,

“My take is this: social media has made it easy for us to favor one motivation for speech (expression), while weakening the other (conversing in order to affect real change). Because more people are seen as simply expressing unfiltered emotion, very few on the other aside care to listen.”

“The more everyone continue to do this, the less we listen to each other. We stop talking with each other, and keep talking at each other — yelling, as well. The chances for any kind of progress fade away.”

First, it is the suppression of free speech, as in the cancellation (or interruption) of talks by universities, that inhibit conversation. Does anybody doubt that? And if you think these disinvitations are infrequent, have a look at FIRE’s list of disinvitations on American campuses between 2000 and 2014. Virtually all the speakers have been demonized as being conservatives, which shows that it’s the Left and not the Right that most often goes after free expression.

Further, social media, particularly YouTube and chat sites, have effected tremendous social change, especially in the weakening of religion. It is through such media, for example, that isolated nonbelievers come to learn that they are not alone, and are strengthened in their conviction. It is through social media that we can learn the arguments of our opponents, whether they be pro-lifers or creationists, and thus develop ways to examine, hone, or refine our own beliefs and arguments. Sturm’s false belief that “expression” and “social change” are at odds with one another is what leads him to conclude, in the quote just above, that free speech has slowed social progress.

But with such a conclusion, what does Sturm suggest we should do? One can gather from the context that he favors limits on “free speech,” though, given Sturm’s failure to be explicit, I’m not sure what those limits are. Does he see someone like Yiannopoulos expressing “unfiltered emotion”, thus impeding any rational discourse and social progress? If so, then he should listen to the libertarian Ben Shapiro, who is far more fact-oriented and less emotional than Milo. I disagree with much of what Shapiro has to say, but nobody could accuse him of yelling. And I think Shapiro, disagreeing with him as I do, is nonetheless a very valuable resource for liberals, as he forces us to examine our arguments more closely if we feel he’s wrong.  Those who simply yell in response to Shapiro’s claims make the Left look unreflective.

Given that Sturm equates “free speech” with “emotional speech and yelling”, it’s hard to know what he thinks of people like the Berkeley protests who prevented Yiannopoulos from speaking. Were they trying to prevent emotional and non-rational speech that could damage society, and thus doing us a service? Or were they themselves yelling and demonizing their opponents in a way that would turn off those who would otherwise listen to their arguments? I don’t know for sure, but I suspect Sturm has no interest in defending Milo, since he says this:

Recently, a big deal has been made about an agitator who lost a book deal about some unabashed commentary regarding pederasty. I won’t dig into the story itself (you can read the link), but the whole thing has made me wonder why we value free speech. I guess like so many of our freedoms, I wonder if it has morphed into a crutch that allows us to be utterly terrible and careless people, rather than making us better.

Milo’s freedom of speech has nothing to do with the subsequent accusations of pedophila that brought him down. Yes, you can say he’s a terrible person, but that’s completely independent of whether, when invited to Berkeley by the College Republicans, he had a right to speak within the limits of the First Amendment.

In the end, Sturm’s piece suffers from a conception of free speech that nobody really holds, from his subsequent conclusion that free speech and positive social change work against each other, and from his failure to be explicit about what he recommends. He winds up sounding like a pablum-fed liberal whose message is simply this: “Why can’t we be nice to each other?”

52 thoughts on “A badly confused piece on free speech”