“Niche construction” is a new term in evolutionary biology—indeed, a buzzword—although the idea has been around under other rubrics for years. It is the idea that the niche of an organism is not something static, imposed by its environment, but that the organism, as it evolves in behavior, morphology, and physiology, can change its environment in a way that changes how natural selection operates. In this way, its proponents say, there is feedback between the organism and its environment, mediated by the evolutionary process of natural selection.

The classic example is the beaver.  The ancestors of this creature presumably evolved to cut down trees and build dams and lodges, eventually creating lake environments that they did not have before. And living in that lake and in the lodge will affect what evolutionary changes are useful to the beaver, that is, how it will evolve (presumably to cope with a more lake-y existence). 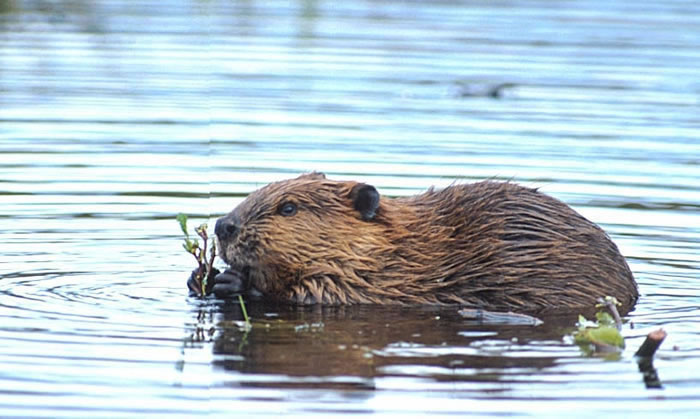 But you can think of many, many examples. Any animal that builds a nest, a tunnel, or a hole to live in changes its environment, though not necessarily in a way that would affect future selection. Humans, through evolution, got big brains that allowed them to not only eat many more sweets and fats (thus creating selective pressure for genes protecting against diabetes and heart disease), but also invented medicine, therefore relaxing many of the forms of selection that previously killed us. The list goes on and on, and is uncontroversial. (I should add that some aspects of the environment are unlikely to be altered by the evolution of its inhabitants. The hydrodynamic properties of water don’t change when a fish evolves, and the color of snow doesn’t change when a polar bear evolves a white pelage.)

What is new is that a group of “new wave” evolutionists, most notably Kevin Laland at the University of St Andrews, claim that niche construction (henceforth “NC”) is an unrecognized factor in evolution, a very important one, and is an evolutionary process like natural selection.  This is part of the “extended evolutionary synthesis” (EES) that is, in my view, largely misguided, but is also funded to the tune of $11 million by the John Templeton Foundation—a grant given to about 50 investigators headed by Laland. I’ve written before about the various issues subsumed by the EES, including NC, and so won’t reprise my criticisms here. Instead, I’ll direct you to a a new manuscript on NC by Manan Gupta et al. (it’s on the preprint server bioRχiv, where you can download the pdf file; reference and link below).

The manuscript (I don’t know where it will be or has been submitted) makes several points about NC, and is critical of its use as a buzzword and of the claim that it’s an area that has been sorely neglected by evolutionists until now. Here are the paper’s main points:

a.) Basically, every evolutionary change can be seen as NC. Every evolutionary change in an organism ultimately came about because it improved reproduction (and sometimes survival), and those changes almost always alter the environment. Even an improvement in the ability to eat, for example, depletes resources faster, and thus changes the environment. Coevolution, in which members of different species affect each other’s evolution (parasites and hosts, predators and prey, pollinators and flowers, etc.), are well known: each change in one species affects the other species, and that change feeds back on the first species.

Darwin’s orchid, for instance, has a long nectar spur, forcing the moth pollinator to get really close to stick its tongue in for nectar, allowing the pollen to stick to the moth’s head. (This is adaptive for the flower, which “needs” to spread its genes.) That, in turn, drives an evolutionary increase in moth tongue length (to get the nectar more easily), and that drives an increase in the length of the nectar spur to make getting the nectar more difficult, creating continuing reciprocal selection that has led to the evolution of moths with long tongues and an orchid with a long tube (see below). Each organism’s evolution changes its “biotic” environment, thus affecting its future evolution, and that is NC: 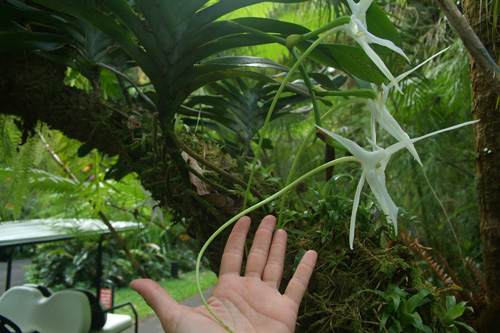 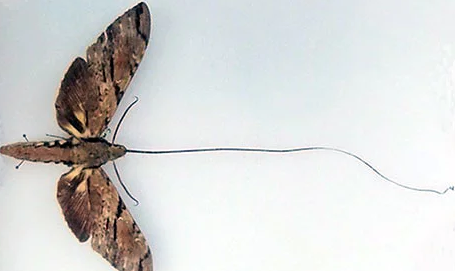 Gupta et al. also cite experiments in flies showing that crowding vials with larvae led to a change in natural seletion, leading to the evolution of two types of larvae: those developing fast to get to the pupal stage first, and those developing later that could tolerate larval excrement better.  In humans, our evolved big brains led us to domesticate animals for milk, and that, in turn, gave a substantial reproductive advantage to those individuals who, unlike their ancestors, were able to get nutrients from the milk’s lactose by keeping the previously-inactivated enzyme lactase (not useful after weaning in ancestors) turned on after childhood. Our “pastoral” habits of rearing animals led, in those areas where humans kept milk animals, to an evolution of lactase genes that were permanently activated.  That, too, can be seen as a case of NC.

b.) NC has already been incorporated into evolutionary biology, not just in the examples above, but in theoretical work. NC can be modeled by a simple two-gene situation in which evolution at one gene affects evolution at the other, and there are many such models. Even if they don’t explicitly evoke environmental change as the result of evolution at one gene, that is what could be the result, and that environmental change could impose selection on the second locus. The added feature with NC is that there may be a time lag between the changes at gene 1 and at gene 2, as the environmental modifications produced by gene 1 may take some time to exert selection on gene 2. The condition whereby the “fitnesses” of variants at one gene depend on the fitnesses of variants at another is called epistasis. And epistasis has long been a feature of models in evolutionary genetics.

NC affects the way in which selection acts. Its role is thus of a modifier which affects how a certain category of evolutionary process acts in a given instantiation, whereas selection has a very different logical or epistemic status as a specific category of process.

d.) The proponents of NC as a novel, unrecognized evolutionary “process” tend to make the same arguments over and over again in different papers. I agree; one sees a surfeit of assertions and a deficit of examples—at least examples showing that NC has been neglected.  This is also true for other claims about the EES, including the importance of “Lamarckian” evolution produced by environmentally-induced methylation of DNA, the primacy of evolutionary plasticity in evolution, the self-organizing properties of organisms, and so on. As Clara Peller said, “Where’s the beef?”

e.) The relentless pushing of NC as a neglected but important aspect of evolution reflects in part the careerism of investigators. I agree again. Evolutionists are not ambition-free, and we are human. In science, you make a name for yourself not by confirming what somebody else already found, but by suggesting and pushing new paradigms. This is especially true of evolution, a field in which new paradigms are rare because Darwin got so much right. That’s why “Darwin was wrong” claims make headlines in the popular science press. (The “neutral theory” of evolution, which assumes that many genetic variants have no differential effect on fitness, was a truly new paradigm.)  It’s not seemly to say this, but I don’t see why not. Regardless of someone’s motivations, their scientific ideas are always judged against nature. One can then ask informally, “Well, if NC has long been recognized under other names, and isn’t really a new process, why is it being touted as a really important unrecognized aspect of evolution?” I think the answer has to involve big ambitions.

But the authors push this part too hard, saying that that careerism is “an instantiation of academic niche construction.” That’s pretty funny, and partly true, but is not going to win over the reviewers of the paper, for one can criticize ideas in a manuscript without assessing the psychology of one’s opponents. I suspect this part will work against the acceptance of Gupta et al.’s paper. And Gupta et al. say this in rather harsh ways, as in the paper’s abstract (my emphasis):

In recent years, fairly far-reaching claims have been repeatedly made about how niche construction, the modification by organisms of their environment, and that of other organisms,  represents a vastly neglected phenomenon in ecological and evolutionary thought. The proponents of this view claim that the niche construction perspective greatly expands the scope of standard evolutionary theory and that niche construction deserves to be treated as a significant evolutionary process in its own right, almost at par with natural selection. Claims have also been advanced about how niche construction theory represents a substantial extension to, and re-orientation of, standard evolutionary theory, which is criticized as being narrowly gene-centric and ignoring the rich complexity and reciprocity of organism-environment interactions. We  examine these claims in some detail and show that they do not stand up to scrutiny. We suggest that the manner in which niche construction theory is sought to be pushed in the literature is better viewed as an exercise in academic niche construction whereby, through incessant repetition of largely untenable claims, and the deployment of rhetorically appealing but logically dubious analogies, a receptive climate for a certain sub-discipline is sought to be manufactured within the scientific community. We see this as an unfortunate, but perhaps inevitable, nascent post-truth tendency within science.

That last bit, especially the “post-truth” characterization, is unnecessary and a bit mean. Were I a reviewer of this paper, I’d recommend acceptance, but after some revision, including removal (or toning down) of the psychologizing!

55 thoughts on “Niche construction: does it represent a “vastly neglected phenomenon” in evolutionary thought?”