Back in 2013 I put up a post showing a negative correlation between the religiosity of American states and their acceptance of evolution, a relationship that also holds among European countries (see original post for figures). At that time, I had access to religiosity for only the 10 most and 10 least religious states in the U.S., but all of the former were in the bottom half of the “accept evolution” list, while all the the latter were at the top. That kind of result needs no statistics to be significant. Here’s a figure I show in some talks: 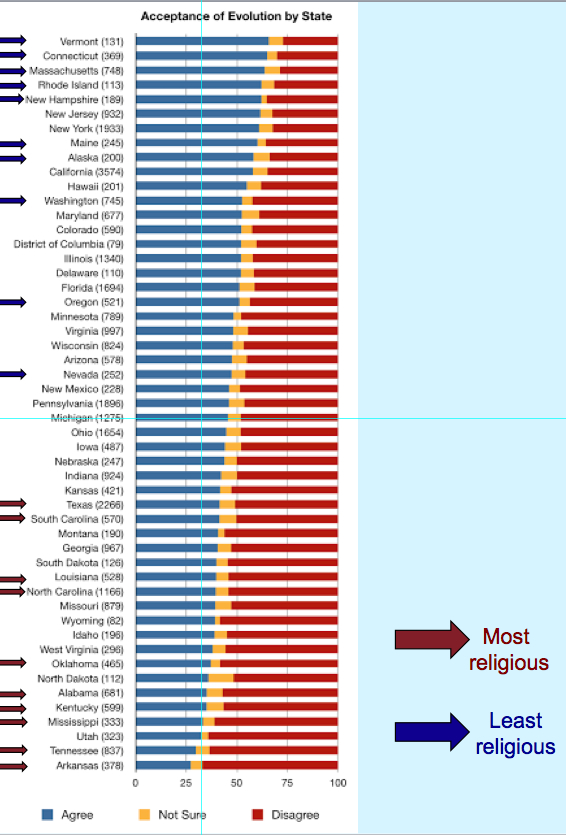 Now this is a correlation, not a proof of causation, but I think there’s a third factor that explains both: social well being.  People tend to be more religious when their social conditions make them feel powerless or marginalized, and we all know that rejection of evolution is based almost entirely on religiosity. In terms of social well-being, states in the South tend to be lower than others on many indicators. Thus the relationship above—and a similar relationship among 32 European countries, which would be even stronger had I data from the Middle East and sub-Saharan Africa—suggests to me that acceptance of evolution is ultimately tied to socioeconomic factors that promote religion. That in turn suggests that perhaps the best way to increase acceptance of evolution (something we’re all pondering this Darwin Day) would be not to teach evolution better or more pervasively, but to reduce the influence of religion.

Here’s a bit of evidence for this supposition: the Gallup/Healthways data for well-being among America states  in 2016 (see full data here), data that takes into account many measures of social “health”: 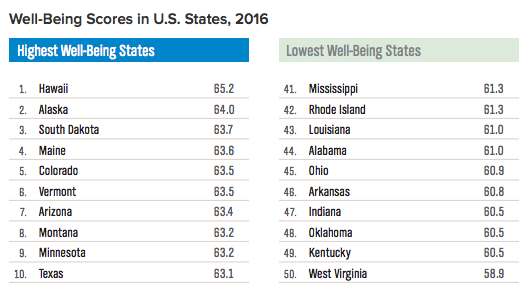 While the data don’t line up perfectly with religiosity, I’d be willing to bet there’s a correlation among all the states, for states with the highest well being tend to be less religious, and vice versa (given historical factors, we don’t expect a perfect relationship).  Perhaps some reader will plot this relationship, as well as correlating acceptance of evolution with the newest data on religiosity in the US  released four days ago by the Gallup organization.

In its new survey, Gallup polled 174,969 people, with at least 480 in every state, and sorted them by religiosity as follows:

Here are the most and least religious states, classified using the “very religious” criterion (data for all states is at the link above): 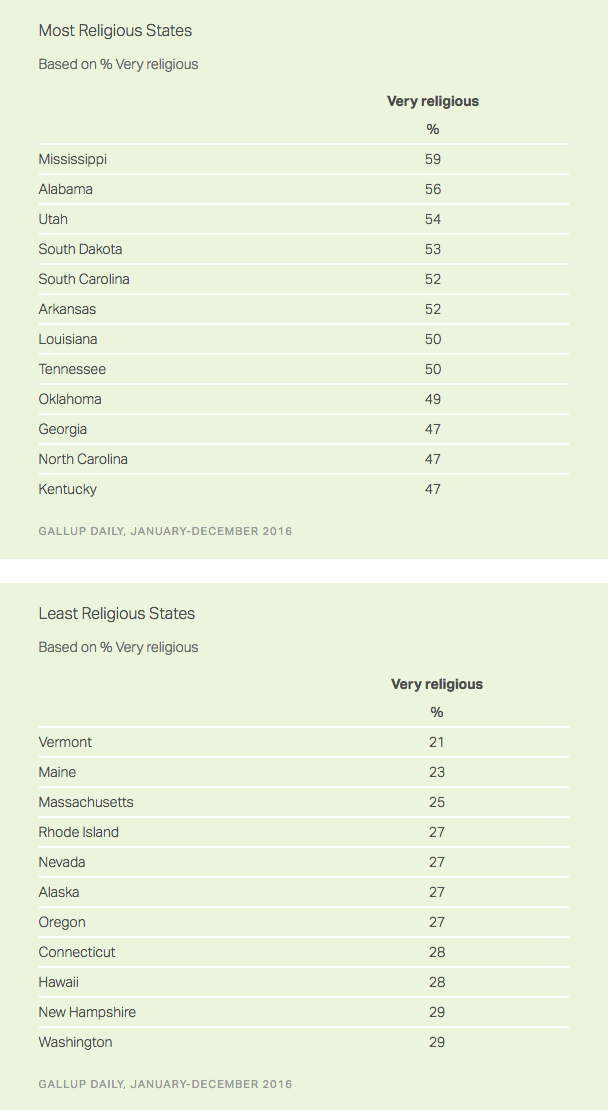 If you put the new religiosity data on the graph above, there is still no overlap between the two groups of states. Thus, with respect to acceptance of evolution, the least religious states continue to all rank higher than the most religious states.

For comparison, here are the Gallup data from 2009:

The rankings are more or less similar to those for 2016. Among most religious states, Utah joined the list this year (Mormons, no doubt), and Mississippi tops the list for the ninth year in a row. As usual, Alaska and states in New England and on the Pacific coast (and, surprisingly, Nevada), come off as the least religious states. Here’s a map showing the religious landscape for the latest data (greener = more religious). 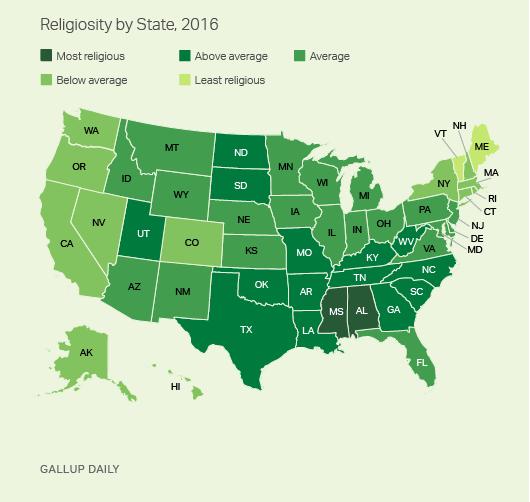 Well, we don’t expect either religiosity or its upshot, acceptance of evolution, to change much over 8 years, but it’s useful to remind ourselves from time to time of this relationship, as well as of the relationship between low social well-being and high religiosity. In that respect, I think, Marx was right:

Finally, the data show a slight increase in secularism in the U.S. Overall, Gallup found that the percentage of U.S. adults identifying as very religious has shrunk from 41 percent in 2008 to 38 percent in 2016, while the number of nonreligious people has increased from 30 percent in 2008 to 32 percent in 2016. That’s not much of a change, but it buttresses other data on “nones” (those who don’t formally identify with a church) showing what I think is an inexorable march towards the de-religionizing of the U.S.

56 thoughts on “New data on the religiosity of U.S. states and its correlation with accepting evolution”