Next Wednesday, February 1, the ever-unruly Milo Yiannopoulos, Breitbart editor, provocateur, “alt-righter”, and reliable inciter of Regressive Left hatred, will be speaking at the University of California at Berkeley (UCB), invited by the Berkeley College Republicans (a student organization). Yiannopoulos’s talk is part of his continuing “Dangerous Faggot Tour.”

There will surely be trouble, for Milo + Berkeley = Attempted Censorship. (I’m becoming aware that, taking a playbook from some Muslims, campuses and students are starting to call Milo’s appearances “unsafe”—but precisely because students come out en masse to demonstrate in a violent way, and, once inside the auditoriums, to throw tantrums and try to shut the speaker down. If nobody showed up, or simply tried to demonstrate peacefully, the events would come off without a hitch. But that, of course, would take away one of the excuses for trying to ban Milo in the first place. In other words, the threat of violent retaliation for a perceived “hate speech” offense is a sufficient reason to disinvite the speaker.) In fact, twelve UCB professors originally signed a letter asking the Chancellor to cancel the event, and 90 others have added their names since. Here’s what one signatory said:

“We believe wholeheartedly in free speech and in the presentation of views that may be controversial or disturbing, politically or personally,” said David Landreth, one of the 12 professors who authored the letter, in an email. “However, Mr. Yiannopoulos’s public talks routinely veer into direct personal harassment of individuals; they often also call for such harassment and aim to incite it.”

Even if that were true (and I do deplore the singling out of one transgender student in a talk in Wisconsin), that’s not sufficient reason to cancel a talk. Note, too, the “we believe in free speech BUT” trope: the “but” is a sign you’re dealing with Regressive Leftists. And if they believe in free speech for views that may be “personally” disturbing, why do they decry “personal harassment”? If that harassment is defamatory or slanderous, it’s illegal, as it is if it calls for immediate violence. But if personally harassing individuals is a crime, then many comedians would be out of business now (Don Rickles comes to mind). In fact, Milo rarely calls out individual students, and when he does so they are usually “public figures,” as one could argue the Wisconsin student was. Beware, O beware the claim that speech should be band because it involves “personal harassment of individuals.”

As reported by the student newspaper The Daily Californian, Berkeley Chancellor Nicholas Dirks wrote a long letter to the campus community addressing Milo’s appearance. The letter is on the paper’s site, but you can access it more easily here. The good part is that Dirks defends Milo’s right to talk as free speech, e.g.:

Since the announcement of Mr. Yiannopoulos’s visit, we have received many requests that we ban him from campus and cancel the event. Although we have responded to these requests directly, we would like to explain to the entire campus community why the event will be held as planned. First, from a legal perspective, the U.S. Constitution prohibits UC Berkeley, as a public institution, from banning expression based on its content or viewpoints, even when those viewpoints are hateful or discriminatory. Longstanding campus policy permits registered student organizations to invite speakers to campus and to make free use of meeting space in the Student Union for that purpose. As mentioned, the BCR is the host of this event, and therefore it is only they who have the authority to disinvite Mr. Yiannopoulos. Consistent with the dictates of the First Amendment as uniformly and decisively interpreted by the courts, the university cannot censor or prohibit events, or charge differential fees. Some have asked us whether attacks on individuals are also protected. In fact, critical statements and even the demeaning ridicule of individuals are largely protected by the Constitution; in this case, Yiannopoulos’s past words and deeds do not justify prior restraint on his freedom of expression or the cancellation of the event.

Berkeley is the home of the Free Speech Movement, and the commitment to free expression is embedded in our Principles of Community as the commitment “to ensur(e) freedom of expression and dialogue that elicits the full spectrum of views held by our varied communities.” As a campus administration, we have honored this principle by defending the right of community members who abide by our campus rules to express a wide range of often-conflicting points of view. We have gone so far as to defend in court the constitutional rights of students of all political persuasions to engage in unpopular expression on campus. Moreover, we are defending the right to free expression at an historic moment for our nation, when this right is once again of paramount importance. In this context, we cannot afford to undermine those rights, and feel a need to make a spirited defense of the principle of tolerance, even when it means we tolerate that which may appear to us as intolerant.

But what I find problematic about Dirks’s letter is the bit where the University not only distances itself from Yiannopoulos’s views, which I guess is okay, but details some University actions that look for all the world like an attempt to “persuade” the College Republicans not to host Milo—or to disinvite him. To me, that smacks of attempted censorship.  Read the excerpt from Dirks’s letter below and tell me what you think; the material after the first paragraph almost sounds like attempted prior restraint:

Like all sponsors of similar events, BCR will be required to reimburse the university for the cost of basic event security. Law enforcement professionals in the UCPD have also explained to the BCR that, consistent with legal requirements, security charges were calculated based on neutral, objective criteria having nothing to do with the speaker’s perspectives, prior conduct on other campuses and/or expected protests by those who stand in opposition to his beliefs, rhetoric and behavior.

In addition, however, we have also clearly communicated to the BCR that we regard Yiannopoulos’s act as at odds with the values of this campus. We have emphasized to them that with their autonomy and independence comes a moral responsibility for the consequences of their words, actions, events and invitations – and those of their guest. We have made sure they are aware of how Yiannopoulos has conducted himself at prior events at other universities, and we have explained that his rhetoric is likely to be deeply upsetting and perceived as threatening by some of their fellow students and members of our campus community. Our student groups enjoy the right to invite whomever they wish to speak on campus, but we urge them to consider whether exercising that right in a manner that might unleash harmful attacks on fellow students and other members of the community is consistent with their own and with our community’s values.

Finally, we have also made the BCR aware that some of those who are opposed to Yiannopoulos’s perspectives and conduct have vowed to mount a substantial protest against his presence on our campus. UCPD has been directed to maintain public safety and to do what it can to prevent disruptions and preserve order. It should be noted that the anticipated cost of those additional preparations and measures will be borne entirely by the campus, and will far exceed the basic security costs that are the responsibility of the hosting organization. We will not stand idly by while laws or university policies are violated, no matter who the perpetrators are.

Nothing we have done to plan for this event should be mistaken as an endorsement of Yiannopoulos’s views or tactics. Indeed, we are saddened that anyone would use degrading stunts or verbal assaults on marginalized members of our society to promote a political platform.

I wonder if the Administration does this when an anti-Israeli speaker comes to campus, or an anti-Palestinian speaker? How often does the administration have a sit-down with any student group and let them know with a nod and a wink that it might be better if they disinvited a speaker or hadn’t invited them in the first place?

Am I wrong, or do you think those words are out of place in Dirks’s letter? I can see why they were included: to show that the University is not on board with Milo’s message, thus trying to soothe the easily-offended students. But why should a University have to say any of this stuff in the first place? This wouldn’t have happened at the University of Chicago, where the administration would never try to position itself politically during a kerfuffle over a speaker.

Finally, below is a picture from a post on the San Francisco site Carpe Diem!, calling for people to come out and drive Milo off campus. An excerpt:

Milo Yiannopoulos is a spokesperson for the newly activated far right, an Islamophobic writer for Breitbart, a leader of the Gamergate sexual harassment campaign, and a figurehead for some of the most hateful right-wing elements in Trump’s camp. We should allow no space for his message at UC Berkeley.

We also have to do more than stop one event to prevent these far right elements from recruiting and growing their forces. We have to shut them down and drown out their events in every community they pop up, and we have to undermine them politically as well.

Well, peaceful protest is one thing, but I don’t think this is what this group has in mind. . . . 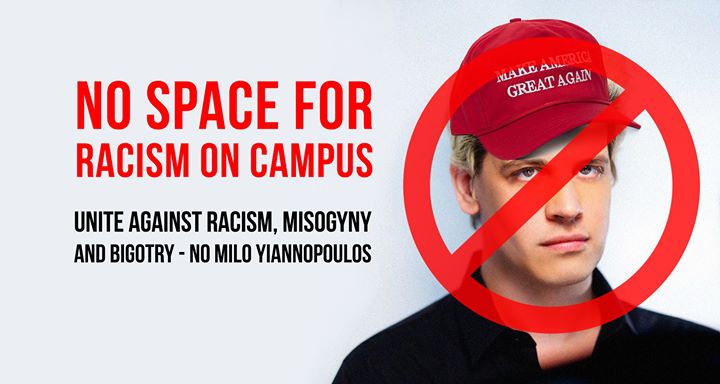