The BBC has a new piece on “How Japan has almost eradicated gun crime“, which seems relevant to the problem of gun violence in the U.S., but of course many will dissent. 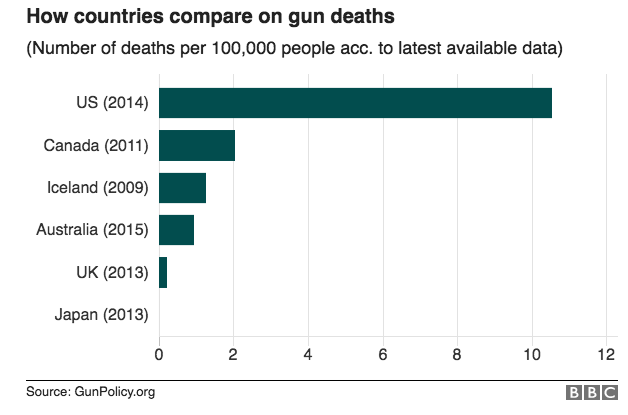 Now one can argue about the reasons: a different culture, stricter gun control in Japan, and so on, but I’d to at least float the idea that gun control has something to do with it. Canada, which arguably has a culture similar to that of the U.S., has a much lower homicide rate, and of course stricter gun control laws.  And Canada lacks the U.S.’s Second Amendment to the Constitution permitting citizens to “keep and bear arms.” While I argue strenuously that that Amendment deals with its specified intent of permitting a “well regulated militia,” the Supreme Court has interpreted that to mean that private citizens can own guns for their personal use, including handguns. A  2012 Congressional report estimated that Americans owned 300 million firearms, which exceeded the entire population of the US at that time.  And that doesn’t include illegal firearms. In Japan, there were only 0.6 guns per 100 people in 2007, compared to 89 in the US in the same year.

Gun ownership in America has increased, and gun manufacture is rising steadily; here are two plots from the Washington Post article reporting the data above: 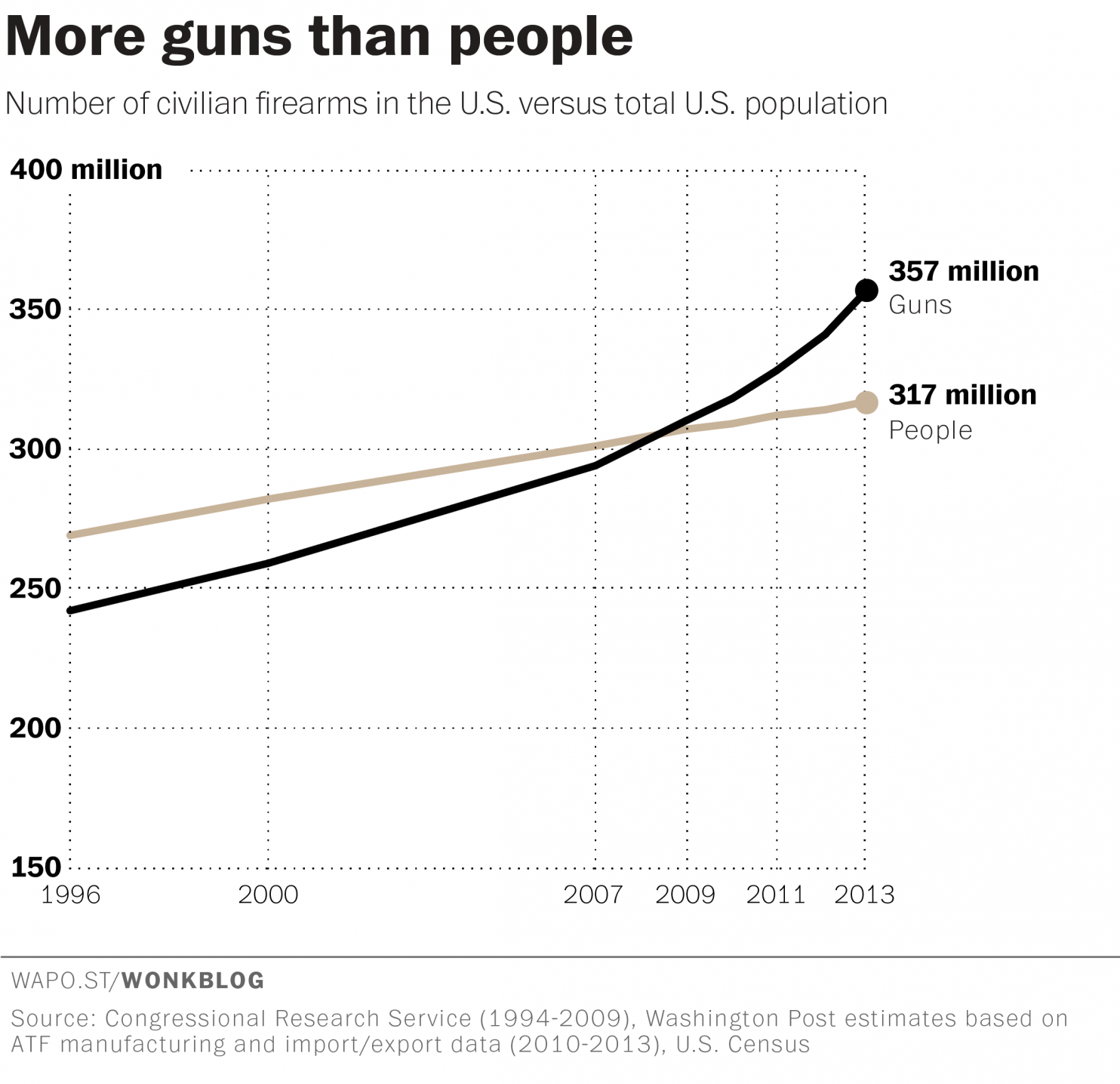 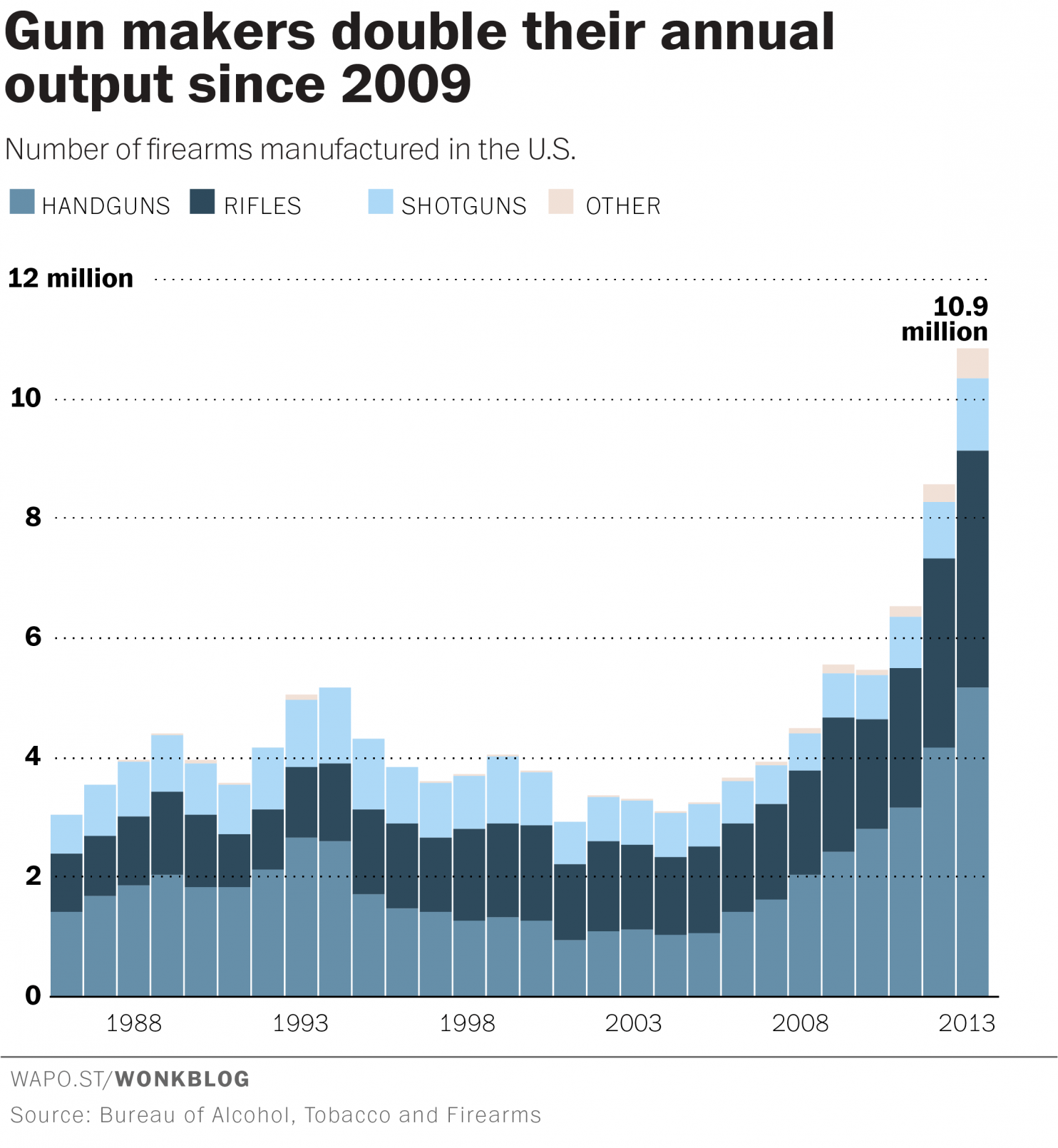 I haven’t looked for a correlation between severity of gun-control laws and homicide deaths, but readers can inform me if there is one (and I realize that correlation isn’t necessarily causation).

Nevertheless, here are some facts about Japan from the BBC piece:

As for the Japanese police, they fired only six shots–total!–in 2015. The cops can’t take their guns with them when they’re off duty, and they’re all trained in judo to the black-belt level. One police officer who committed suicide with his gun was in fact posthumously charged with a crime, probably to set an example.  Yes, there is a problem with Japanese gangs having guns, but even gang-related gun crimes have fallen sharply.

I know the arguments against gun control in the U.S.: the Second Amendment, the fact that good guys need guns to defend themselves against the bad guys with illegal guns. Against that we have the high number of gun deaths that are accidents (exceeding “justifiable homicides by a long shot”), the dubious interpretation of the Second Amendment, the fact that many illegally owned guns were stolen from rightful owners, and the fact that everyone with a gun, including cops, has become far more trigger-happy than they were a few decades ago. If you doubt that the toll of private gun ownership exceeds its defensive utility, read this report by the Violence Policy Center, which concludes (my emphasis):

Guns are rarely used to kill criminals or stop crimes. In 2012, across the nation there were only 259 justifiable homicides1 involving a private citizen using a firearm reported to the Federal Bureau of Investigation’s Uniform Crime Reporting (UCR) Program as detailed in its Supplementary Homicide Report (SHR).2 That same year, there were 8,342 criminal gun homicides tallied in the SHR. In 2012, for every justifiable homicide in the United States involving a gun, guns were used in 32 criminal homicides. 3 And this ratio, of course, does not take into account the tens of thousands of lives ended in gun suicides or unintentional shootings that year

Even as we speak, the Florida legislature is considering a bill to allow guns to be carried in government buildings, college campuses, and airports—places where they were previously forbidden. That’s ironic given the shootings on Friday in the Fort Lauderdale Airport.

How can we stop the madness? That surely won’t happen during a Trump administration, or even if Republicans control the Congress, as they will for some time. But there must be a way to go back. The issue is of course that legislators, indebted to and pressured by the National Rifle Association, won’t let it happen. Talks of bans are out: right now we’re just arguing about whether people can own assault rifles!

This is one problem with no easy solution, which is to ratchet back legal guns at the same time that people have them illegally. Readers are welcome to offer their solution. All I know is that it can’t be “more of the same.”

Here is a related article in The Atlantic from 2012, and you can read some counterarguments about Why America Can’t be Like Japan here. I find this sentence grimly amusing:

In short, while many persons may admire Japan’s near prohibition of gun ownership, it is not necessarily true that other nations, such as the United States, could easily replicate the Japanese model. Japan’s gun laws grow out of a culture premised on voluntary submission to authority, a cultural norm that is not necessarily replicated in Western democracies.