This report will be found only on right-wing websites like Reason.com, so take it with a grain of salt as usual. However, there’s an eyewitness report by blogger Jack Halberstam, who writes about LGBT issues; but Halberstam, also links to the deeply weird “Freedom to Marry our Pets Society” page, so take that into account.

This incident is reported to have happened at Reed College, a Center of Regressive Leftism in Portland, Oregon. On November 11, Kimberley Pierce, director and cowriter of the famous movie “Boys Don’t Cry,” gave the Greenberg Distinguished Scholar lecture on that film after it was screened. If you’ve seen “Boys Don’t Cry” (1999), you’ll know it was a sympathetic treatment of the tragic story of Brandon Teena, a trans male who was raped and murdered by two ex-convict associates in 1993. His transsexuality was the reason he was killed.

The movie, which I’ve seen, is deeply moving, and garnered Hillary Swank, who played Teena, an Oscar for Best Actress and a Golden Globe award; co-star Chloe Sevigny, who played Teena’s girlfriend, was nominated for theBest Supporting Actress Oscar. If you’ve seen it, you’ll know that the movie depicts with loathing the transphobia that caused Teena’s death, and depicts him sympathetically. It was a powerful statement against violence against transgender people.

You can guess what happened at Reed College, for both Pierce and the movie were deemed NOT TRANS ENOUGH. As Reason.com reports:

The students hurled a litany of insults at Peirce, putting up posters that read “fuck your transphobia” and “you don’t fucking get it” among other things. Worse, when Peirce ascended to her podium, students had placed a sign there. It read “fuck this cis white bitch.” That Peirce is actually gender-fluid is quite beside the point.

The students’ unbelievable rudeness crossed the line into a kind of censorship when Peirce tried to speak: the students simply shouted over her. Eventually they let her talk, but some students continued to yell things like “fuck your respectability politics” and “fuck you scared bitch.”

. . .You’re probably still wondering why the social justice left hates Peirce so much. Well, the film was ahead of its time in 1999, but in 2016 it’s problematic. That’s because the main character, Brandon, was played by Hilary Swank, a non-trans person. Students were also incensed at the idea of Peirce having profited from violence against trans people, which isn’t a remotely accurate way to characterize things, but there it is.

Halberstam gives a list of other reasons Pierce was attacked, and then goes on to answer them in a calm and rational way. Here are the students’ objections that he recounts:

Since this incident at Reed, I have heard from other students that they too felt “uncomfortable” with the representations of transgender life and death in Boys Don’t Cry. These students raise the following objections to the film some fifteen years after its release:

There’s further evidence, as Halberstam shows a picture of some of the posters put up by protesting students: 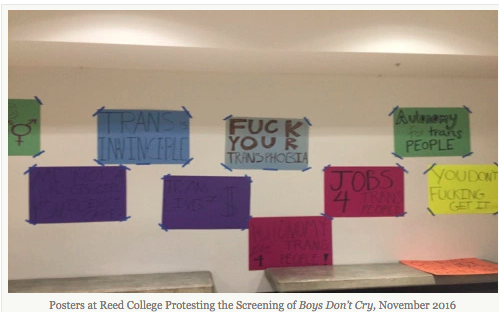 These posters voiced a range of responses to the film including: “You don’t fucking get it!” and “Fuck Your Transphobia!” as well as “Trans Lives Do Not Equal $$” and to cap it all, the sign hung on the podium read: “Fuck this cis white bitch”!! The protestors waited until after the film had screened at Peirce’s request and then entered the auditorium while shouting “Fuck your respectability politics” and yelling over her commentary until Peirce left the room. After establishing some ground rules for a discussion, Peirce came back into the room but the conversation again got out of hand and finally a student yelled at Peirce: “Fuck you scared bitch.” At which point the protestors filed out and Peirce left campus.

Finally, the Reason.com article gives more evidence that this really happened, and notes a sensible response from Reed’s Dean of Students:

A spokesperson for Reed College confirmed the posters and the heckling, which he attributed to a handful of students.

“It has sparked a lot of debate on campus,” the spokesperson told Reason.

Dean of Students Nigel Nicholson, to his credit, penned a strongly-worded statement in the campus paper:

“The actions that I saw were not animated by the spirit of inquiry or the desire to learn that usually animates Reed audiences. The students had already decided what they thought, and came to the Question-and-Answer session to make their judgments known, not to listen and engage. Some brought posters bearing judgments and accusations. Others asked questions, that, while grammatically questions (that is, they ended with question marks), were not animated by a genuine desire to explore a question, but rather sought to indict the speaker. It felt like a courtroom, not a college.

Some students sought to dominate the space, and to take control of the space away from the speaker.

I was deeply embarrassed and ashamed of our conduct, and I hope that as a community we can reflect on what happened and make a determination not to repeat it.”

Now I can’t find Nicholson’s statement online (the articles in the Reed student paper aren’t accessible), so let’s again be a bit skeptical, but I’ll take this as true for the moment. (Perhaps Reed students or faculty can weigh in below or email me.)

The reported treatment of Pierce, including calling her a “bitch” (Pierce is a lesbian), is unconscionable, and the violation of her freedom of speech by the heckling students, solely on the grounds that her sympathetic film didn’t meet every single criterion for transgender purity, is reprehensible.

This is the reason the Left is tearing itself apart: unless you meet various criteria of ideological purity, you’re not only not accepted, but demonized. Christina Hoff Summers, an equity feminist, is not considered a real feminist because she’s not a gender feminist. Ayaan Hirsi Ali is demonized because she once worked for a conservative think tank and is married to a conservative. With criteria this stringent, there’s no hope for the Left to unite around various important issues.

Lost in all this is the fact that “Boys Don’t Cry,” considered a daring and shocking film at the time, was also a landmark in bringing the horrible treatment of transsexuals to the attention of the public; indeed, it was used as a rallying point for trans rights.

What is the Left coming to? And why doesn’t the mainstream media ever report on things like this?