I didn’t have the usual leisure time in the past week to post pictures and information about my trip, for I’m doing a lot of stuff here. But my last three days after Friday are free days, which I’ll use for sightseeing, eating, and maybe finding some nice tea to take back home. (Any recommendations for all of these things, locals? I’m staying in “Central” off Wellington Street.)

Here are some random photos of my peregrinations.

Hong Kong, photographed from across the water in Kowloon. What is appealing about Hong Kong is its felicitous mixture of modernity (viz., the buildings below) and older Chinese culture, or rather Hong Kong culture, as there’s currently a lot of friction between the residents of Hong Kong and the Chinese government, formally their “masters.”

A group of people waiting to cross the street when the light changes. Some of the expats here complain that Hong Kong is too crowded, but they’ve clearly never been to Old Delhi in India!

HSBC, the Hong Kong and Shanghai Banking Corporation, is one of the world’s largest banks. One of my hosts here, Andrew, works for them and took my by the local headquarters to see their very famous brass lions—so famous that they have their own Wikipedia page. The guarding lions, named Stephen and Stitt, first appeared in Shanghai, but the ones in Hong Kong are the most famous:

When HSBC decided to build its third Headquarters at 1 Queen’s Road Central in Hong Kong, opened in 1935, it commissioned two bronze lions from Shanghai-based British sculptor WW Wagstaff. This commission was inspired by the earlier lions commissioned for the Shanghai office, and the Hong Kong lions were modelled on, but are not identical to, the Shanghai lions.

Wagstaff worked with “Shanghai Arts and Crafts” foreman Chou Yin Hsiang who in an interview with John Loch of HSBC’s house magazine “Group News” in June 1977 recalled that when he first joined Arts and Crafts he worked with Wagstaff for two years to make the lions, without having to learn a word of English. . .

. . . As a mark of the respect the lions were held in, the move to Statue Square, and the move back in 1985, were accompanied by the chairman Sir Michael Sandberg and senior management of the Bank and the placement of the lions both temporarily and in their current locations was made only after extensive consultations with feng shui practitioners.

. . . Like the Shanghai lions, the Hong Kong lions became objects of veneration, and focii [sic] of the Bank’s perceived excellent feng shui. Young couples still bring their toddlers to stroke the paws and noses of the statues hoping for luck and prosperity.

Here’s Stephen; note how his paws have been rubbed bright by those wanting good luck:

The Hong Kong lions are also called Stephen and Stitt, and the Hong Kong Stephen has bullet or shrapnel scars in its left hind-quarters dating from the fighting in the Battle of Hong Kong. [JAC: On Dec. 7, 1941, the same day the Japanese attacked Pearl Harbor, they also attacked Hong Kong, defeating the British and Canadian, and Indian defenders within two weeks.]

The lions were taken away by the Japanese but fortuitously recovered; read more about them here.

A Buddhist-themed park (with a nunnery next door) in Kowloon:

Real estate is hideously expensive in Hong Kong, which means that apartments and stores must be small. Here’s a hardware store: the Hong Kong equivalent of Home Depot. You can’t find anything yourself; you have to ask, and the proprietor can locate anything

This store sells almost exclusively soy sauce: there are many more types of soy sauce here than in the U.S., as each type is used for a different dish or type of food:

Because storage space is small, and most locals shop for food daily, freshness is prized and paramount. I was told that this beef was living cow the day before it came to market (there’s no refrigeration in these markets):

Several streets in the city are devoted to the Flower Market, a lovely place:

Pitcher plants for sale, hanging from the ceiling

I was astounded that this tiny apple tree, no more than three feet tale, bore full-sized fruit:

Nearby is the Bird Market, which saddened me as there were many wild birds for sale in small cages, unable to fly free. I couldn’t bear to photograph them. Here’s one store, though, that sells fancy cages:

My one photo from the bird market: an older Chinese man and his parrot, which he fondled and kissed. I was told by a friend that this is a male Eclectus parrot, (Eclectus roratus) from Southeast Asia.

When I wondered how my friend knew it was a male, as many parrots have identical males and females, I found out that this species, from SE Asia and its islands, has extreme sexual dimorphism, so that males are green like the one above, while females look like the one on the right below (photo from Wikipedia). Don’t ask me why: 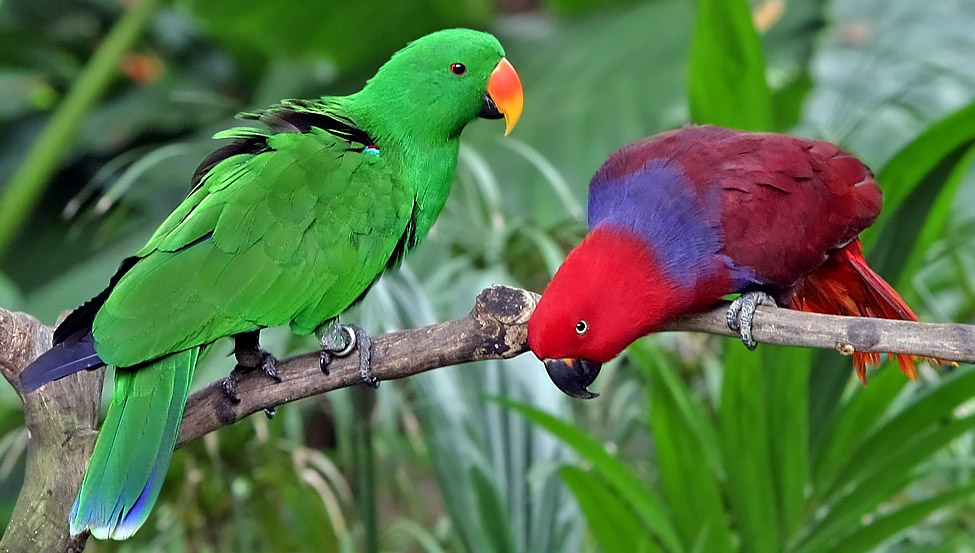 Also nearby is the Goldfish Market, where all kinds of goldfish and koi (all a single highly modified species of carp) are for sale. The small ones hang in bags on the street; presumably they’re put back in tanks at night:

The power of artificial selection!:

Finally, under some of the underpasses and walkways on the weekend I saw large groups of women sitting on blankets and sheets of cardboard, with food, drinks, playing cards, and so on. They were clearly not homeless people, and I was told that these are the domestic workers of Hong Kong—largely from the Philippines—who gather to meet their fellow workers on the weekends. The underpass gives them a sheltered place to congregate, chat, eat, and while away the hours.