Yes, I know that Deepakity is a genuine card-carrying M.D who studied internal medicine and endocrinology, but to invite him to give the keynote speech at a conference on autism? Not only is that not his speciality (well, I can let that slide), but he’s also the world’s premier woomeister. And yes, clearly his prescriptions for good diet, exercise, and sleep are useful, but of course that’s not new, and prescribing such stuff is hardly all he does, and has nothing to do with what makes him a celebrity.

What bothers me is that I don’t believe he has anything useful to say about autism, a condition whose causes and treatment are obscure at best. And yet, according to the CBC, he’s a keynote speaker (undoubtedly getting a big honorarium) at an autism conference in Canada:

Chopra, an author and prominent member of the New Age movement, will be appearing as the keynote speaker at the Children’s Autism Services of Edmonton’s Annual Conference, Jan. 25. [2017]

And the content of his talk at that link gives me no confidence, either, for it has nothing to do with autism.

Join Deepak as he creates a roadmap for “higher health,” based on the latest findings in both mainstream and alternative medicine,

Deepak will address all these questions as well as practical ways to experience higher consciousness, transformation and healing.  Please mark your calendars to join us at the intersection of autism treatment, and personal well-being.  This will be a must attend event not only for those in the autism community, but for all Edmontonians interested in improving their quality of life.

This has absolutely nothing to do with autism: it’s the same old toxic brew of consciousness, directed human evolution, our own consciouness-created version of reality (Deepakity thinks the Moon doesn’t exist when we’re not looking at it), and the usual “paradigm shift”, which is not happening in either biology or neuroscience. Progress, yes; paradigm shift, no way in hell; what we see is progress produced by the two things Chopra decries: reductionism and materialism.

There are of course people objecting to this, as all good science-loving people should:

Deepak Chopra, a man often described as the “prophet of alternative medicine,” has no place at an Edmonton autism conference, says an Edmonton health expert.

Chopra is the “embodiment of pseudoscience,” according to Timothy Caulfield, a professor of health law and science policy at the University of Alberta.

“I understand the desire to bring in someone who is going to help people think about the big picture, and perhaps help with stress strategies, but Chopra is the icon of pseudoscience,”  Caulfield said in an interview with CBC Radio’s Edmonton AM.

. . . Caulfield said that argument is absurd, arguing a conference intended for those struggling with developmental challenges should not be legitimizing anything but proven medical research.

“I think we, as a society, have to be increasingly suspicious of people that are trying to twist science to put forward a perspective that has no evidence behind it.”

“He’s like the great de-educator. He legitimizes these ideas that have no scientific basis at all and makes them sound scientific. He really is a fountain of meaningless jargon,” said Caulfield.

Kudos to the CBC for giving more space to Caulfield than to Chopra’s stupid ideas. And here’s one bit of evidence against Deepakian woo:

Chopra believes that human aging and illness can be reversed by the power of the human mind, and argues that his practices of “quantum healing”  can cure any number of ailments, including cancer.

Now the cancer stuff is not only irresponsible but dangerous, and it’s reprehensible for Chopra to say such palaver; but if he really has ways of reversing aging and illness, shouldn’t he be getting younger? The data say otherwise: 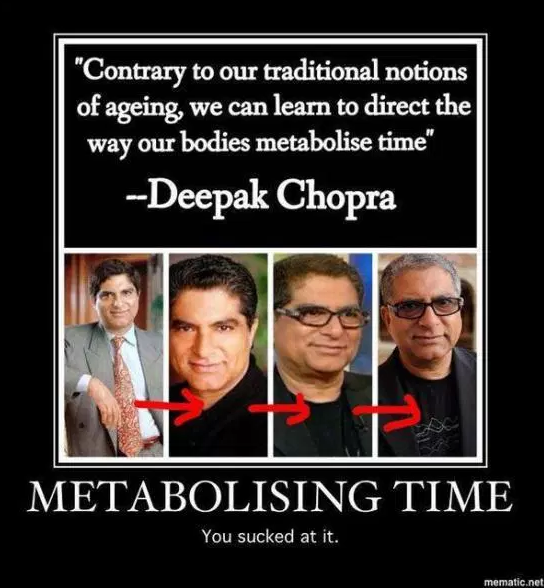 If anybody wants to bet me that his aging will reverse itself, I’ll put up $1000 at even odds.