At any rate, Hami singles out two aspects of Islam that, he says, make it qualitatively different from other religions. We’re familiar with both of these, but it’s unusual to see them expressed so openly and their implications for acculturation of Muslims into Western societies made so plain.

The first is the literalism of the Qur’an, still widely accepted among Muslims:

Contrary to what many think, there is no Christian equivalent to Koranic “inerrancy,” even among far-right evangelicals. Muslims believe the Koran is not only God’s word, but God’s actual speech — in other words, every single letter and word in the Koran comes directly from God. This seemingly semantic difference has profound implications. If the Koran is God’s speech, and God is unchanging and perfect, then so is his speech. To question the divine origin of the Koran, then, is to question God himself, and God is not easily put in a box, well away from the public sphere.

This fundamentalism is worrisome, as it seems, at least now, recalcitrant to change. If you’ve read Ayaan Hirsi’s latest book Heretic, you’ll see that among the five solutions she requires for a “reformation” of Islam is the abandonment of Qur’anic literalism. Yet for now this is a futile request given the ubiquity of such literalism, shown in the chart below from the 2012 Pew Survey of the World’s Muslims (survey involved Muslim-majority countries, and didn’t include some like Yemen and Iran): 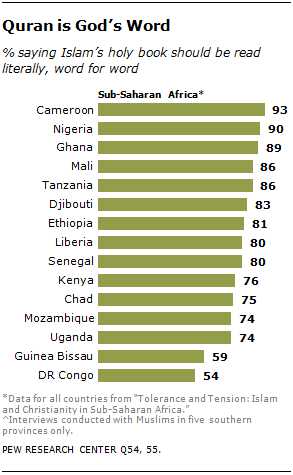 And many believe there’s only a single way to interpret God’s word:

How much better is it in the U.S? Well 50% of American Muslims are still Qur’anic literalists, and 90% believe in angels (a higher proportion of Christians, which I think is about 65%). 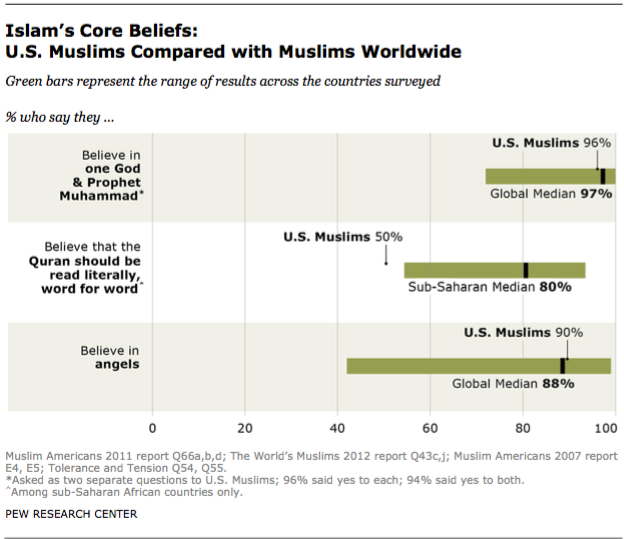 The second brute fact about Islam emphasized by Hamid is its fusion of religious dictates with civil governance:

Differences between Christianity and Islam also are evident in each faith’s central figure. Unlike Jesus, who was a dissident, Muhammad was both prophet and politician. And more than just any politician, he was a state-builder as well as a head of state. Not only were the religious and political functions intertwined in the person of Muhammad, they were meant to be intertwined. To argue for the separation of religion from politics, then, is to argue against the model of the very man Muslims most admire and seek to emulate.

Ergo the large proportion of Muslims who feel that sharia law should be the law of the land (I don’t have data for the U.S. or U.K.):

Hamid only makes one error, I think: when he insists that the hijab is worn largely as a matter of choice, even in places where it’s clearly not:

If you’re a Muslim woman who wears the hijab — covering the hair and most of the body — you can’t wear just any swimsuit. Some women, of course, are pressured or even legally mandated to wear the hijab (as in Saudi Arabia and Iran), but most choose to do so; it’s about their personal relationship with God.

. . .The hijab, by contrast, is ubiquitous in Muslim communities, and in some Muslim countries, such as Egypt and Jordan, the majority of Muslim women cover their hair. Again, this is often a conscious choice: Many Muslims take their religion so seriously that they want to observe seemingly restrictive and pre-modern dress codes. This is the case even in Turkey, where millions of women cover their hair despite decades of secular government and forced unveiling in state institutions.

I think Hamid needs to take a more expansive view of “choice” here, especially given the pressure that Muslim women are under, even in places like Turkey, to conform to the standards of their peers and family by covering their hair. The question of choice boils down to this: if wearing the hijab is a “conscious choice,” not compelled by social pressure, then no opprobrium will fall upon those who choose not to wear it.”  Take a look via Google Image of “women, Cairo, 1970”, and then again using 2015 as the date. You will be enlightened.

To his great credit, though, Hamid doesn’t soft-pedal these results as most American journalists would. His interpretations don’t bode well for the full assimilation of Muslims into Western democratic states:

I realize that some of my fellow American Muslims will view such arguments as inconvenient, portraying Islam in a not-so-positive light. But it is not my job to make Islam look good, and it helps no one to maintain fictions that make us feel better but don’t truly reflect the power and relevance of religion.

In the West, the common response to the challenge of theological diversity has been banal statements of religious “universality.” All too often, interfaith dialogue, however well-intentioned, is about papering over what makes us — or at least our beliefs — different. It is a tenet of our American faith that we’re all basically the same and ultimately want the same things. This is true in some ways, but not in every way.

The crisis of culture and identity — one that sees the rise of the far-right and white nativism in our own country — makes it clear that our differences and divides are real. We would all be better off acknowledging — and addressing — those differences rather than pretending they don’t exist.

I think that some of our politicians, especially Democrats, need to recognize this. The Republicans already do, but unfortunately combine it with calls for banning immigration and for the demonization of Muslims as a whole. But it won’t help matters by hiding our heads in the sand.

Here’s a 70-minute dialogue between Hamid and Leon Wieseltier. I haven’t listened to all of it yet, but it seems to be an explication of his book’s thesis, and that book sounds well worth reading, and not at all to the liking of people like Reza Aslan and Glenn Greenwald. (Note that Wieseltier is wearing his signature cowboy boots, made by Pablo Jass of Lampasas, Texas.)