The definition of “tool use” in animals is a bit controversial, depending as it does on whether the object is modified before it’s used as a tool. In its list of animal tool use, Wikpedia gives a widely-used definition proposed by Shumaker, Walkup, and Beck in their 2011 book Animal Tool Behavior: The Use and Manufacture of Tools by Animals:

“The external employment of an unattached or manipulable attached environmental object to alter more efficiently the form, position, or condition of another object, another organism, or the user itself, when the user holds and directly manipulates the tool during or prior to use and is responsible for the proper and effective orientation of the tool.”

And, according to the Wiki article, tools use is seen in 33 families of birds, including these (I have a video for each example):

There are many more examples, although the authors of the paper we’re discussing today say that “only a handful of bird species are known to use foraging tools in the wild.” It is true that some bird “tool use” has been described only in captive birds, but the Wikipedia article suggests that tool use in nature is seen in more than a “handful” of birds.

Now I’m not sure how important the distinction between “use in the wild” and “use in nature” is: in both cases, animals can either be hard-wired to use tools, or learn it from other individuals who have figured it out themselves. And regardless of whether it’s seen in captivity or the wild, it tells us something about the creativity and intelligence of animals. I suppose biologists are more interested in “natural” behavior rather than behavior in captivity, perhaps because of the possibility that humans rather than other animals could teach it. But biologists are far more fascinated by what goes on in the wild rather than what happens in zoos. For things like mating behavior that’s important, but not so much for tool use.

Regardless, any example of tool use by animals gets attention, like that described in a new paper in Nature by Christian Rutz et al. (free link and download below).  Sadly, not only is the behavior seen only in captivity, but it can only be seen in captivity because the species that uses tools is extinct in the wild. Yes, it’s the Hawaiian crow, the ‘Alalā (Corvus hawaiiensis), once endemic to the Big Island but driven to extinction in the wild by the depredations of mongeese (is that the right plural?), rats, and feral cats. The birds now live only in captivity, and are being bred for eventual release. There are 109 of them in three Hawaiian facilities, and one lonely individual off exhibit at the San Diego Zoo Safari Park.

Here’s an ‘Alalā; they’re handsome birds and, being corvids, are very smart: 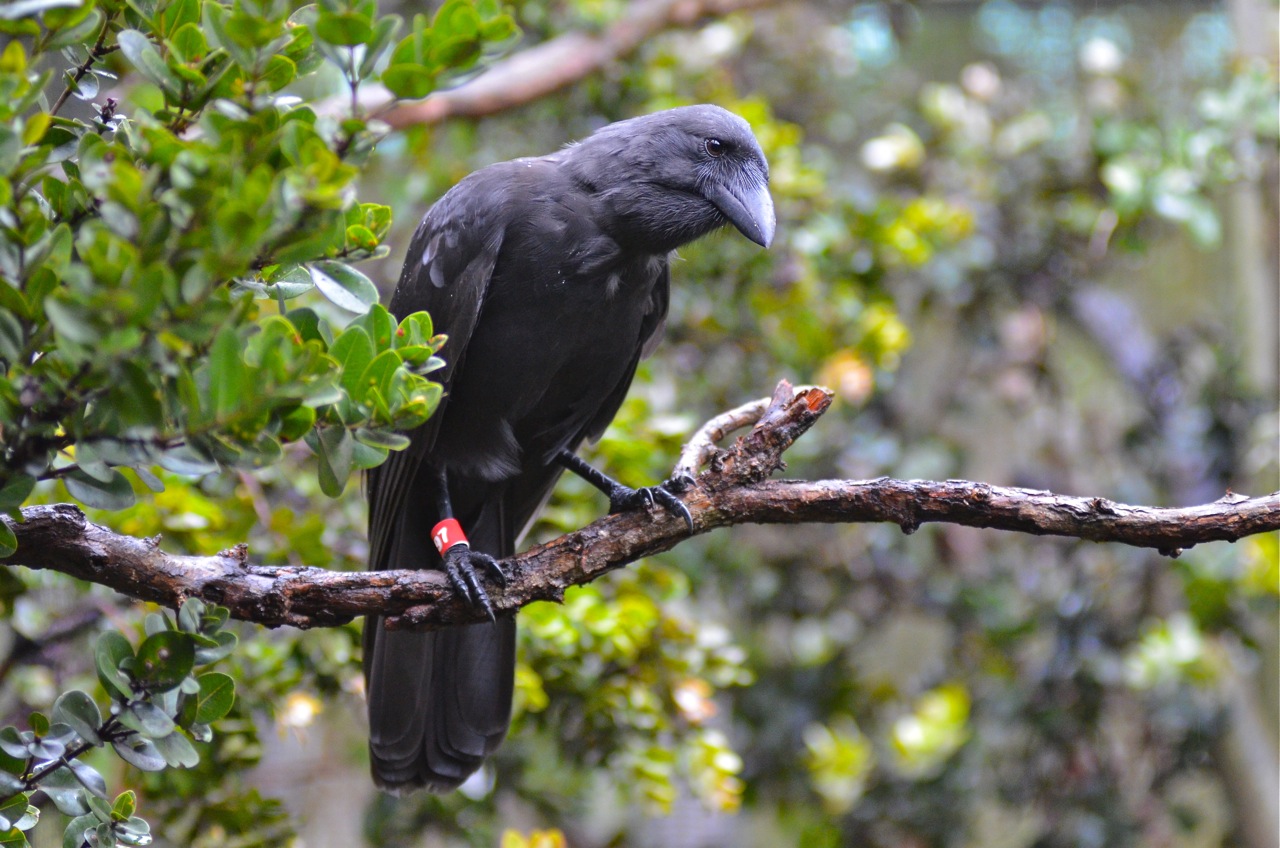 The authors examined 104 of the existing 109 individuals, and found that 78% of them spontaneously used tools (mostly twigs) to probe for, spear and dislodge food items lodged in an experimental log riddled with holes and crevices. Here’s what the behavior looks like, and you can see it in the movie right below the figure:

The New Caledonian crow, Corvus moneduloides, was already known to not only use tools, but solve all kinds of puzzles (see my previous posts here, here, and here); and they may even have a “theory of mind.” C. moneduloides is known to use tools in the wild, but it’s not possible at present to determine whether this is the case for the ‘Alalā.

The observation of tool use raises five questions:

How many times did this behavior originate among those 108 captive crows?  Since they’re caged and kept together (with historical records) as part of the breeding program, the authors determined that, if the behavior was learned and copied, it could have originated between 1 and 8 times. The authors favor the “more than one” number, saying that “it’s unlikely that a single ‘innovation’ event can explain the observed species-wide distribution of tool competence.” Well, to each their own, but those data themselves don’t militate in favor of multiple origins. The next point, however, does:

Is the behavior learned from others, or can it develop in single individuals? Clearly, the behavior, even if learned from others, had to start with at least one individual, so the question is a bit of a red herring. Nevertheless, it bears on how many times it can “originate” in both captivity and the wild. (A more important question, which can’t be answered in any way I can see, is whether there is a genetic propensity to use tools per se, or whether the birds are just fast learners for everything, and hit on tools as handy ways to get food.)

At any rate, the authors examined seven naive crows reared in two groups without ever having seen tool-using adults. All seven birds eventually started probing the holes and crevices with sticks, though only five were ultimately successful. But again, this is only two independent origins, not five.

Did this behavior occur in the wild? We don’t know, of course, but the authors make a case that when the ‘Alalā did live freely, they probably used tools. This is based on two observations: that juveniles spontaneously hit on using sticks to get food (fairly convincing), and that tool-using can be found throughout the whole species in captivity (not so convincing). They do note that before the species became extinct in the wild in 2002, there were no observations of tool-using by wild individuals, though they did forage on branches and trunks for insects.  As I said, though, I find the observation of tool use fascinating regardless of whether it’s seen in nature.

Did tool use in Caledonian and Hawaiian crows arise independently? Almost certainly, for the ‘Alalā and New Caledonian crows are distantly related, and no species in between shows the behavior. It’s thus unlikely that it was inherited in the two tool-users, either genetically or culturally, from a common ancestor. Here’s the phylogeny shown in the paper, along with a map and some other tool-users. 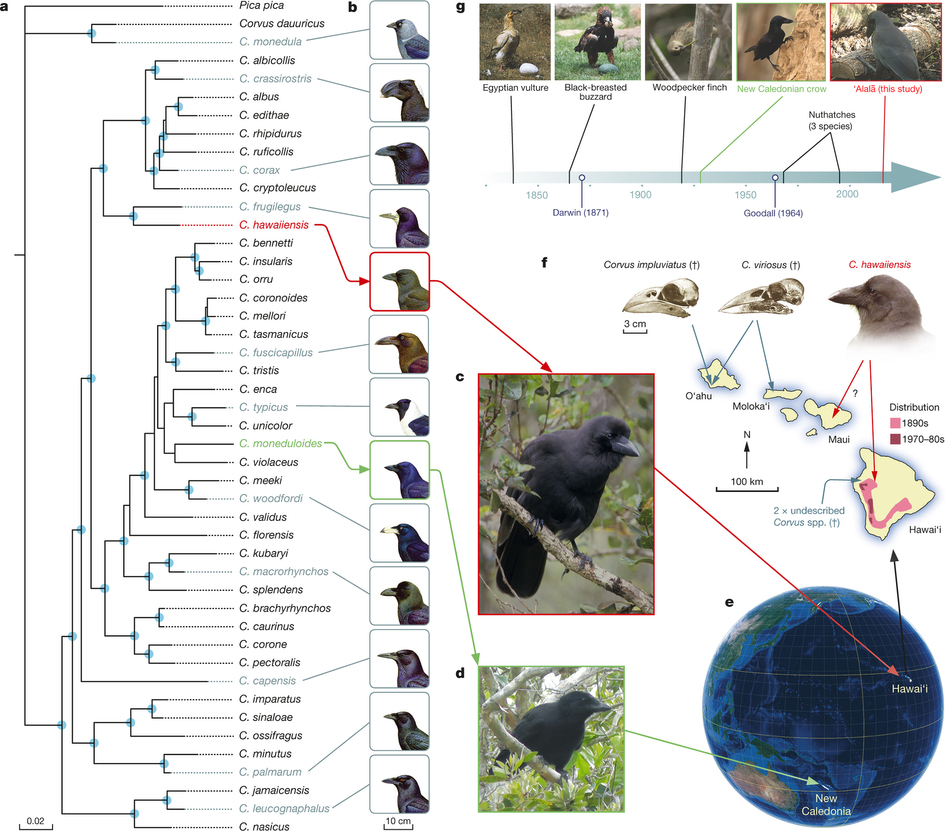 Finally, why did this behavior appear only in those two species of crow? Well, crows are smart, so they’re already prone to develop behaviors like this, especially given their even more remarkable ability to solve complex puzzles. The authors suggest this explanation for tool use in these two species:

As for possible ecological drivers, both species—as well as the stick-tool-using Galápagos woodpecker finch—evolved on remote tropical islands (Fig. 1e ABOVE) where competition for embedded prey is likely to be reduced and predation risk low. These conditions, which have previously been predicted to facilitate tool behaviour, may vary across island environments, but are presumably less common on adjacent mainland habitats, providing a possible explanation for the striking rarity of avian tool use.

Predation doesn’t seem that important to me, and it’s not clear what the authors mean: does using sticks make you more susceptible to being eaten? What seems more important is the lack of competition, especially woodpeckers, which are absent on the Galápagos, New Caledonia, and Hawaii. Woodpeckers are more efficient at getting prey than these crows (woodpeckers don’t, for instance, have to find a tool), and could very well outcompete the crows in foraging for insects in and on trees.

This could of course be tested if other crow species are found on islands lacking woodpeckers and other birds who can extract food from trees without tools, but it would require a large sample of unrelated crows, and I don’t know if we have that. What we have is yet another example of tool use in birds, the second in crows, and an observation that young crows can pick it up spontaneously. I don’t know if that merits a Nature paper, though it’s certainly worth reporting. Underlying all the publicity is the fact that tool use is fascinating to humans because we’re an anthropomorphic species.

19 thoughts on “Another species of crow uses tools”