It’s time! For two weeks (see my announcement here), the Clapham Common Tube station in London will have every ad replaced by pictures of . . . . CATS! No ads, just moggies! This is the result of a Kickstarter campaign that raised £ 23,000 pounds. As the BBC reported a while back:

. . . The images will be around the turnstiles (which the collective are calling cat flaps), down the escalators and leading up to the platform. The aim is that, wherever people look, there will be cats.

The adverts will be word-free apart from one which will highlight the work of Battersea Cats and Dogs Home and Cat Protection charities.

The idea emerged from a 200-strong group called Glimpse, which wanted to express how “friends and experiences are more valuable than stuff you can buy” said Mr Turner.

Initially they were going to use pictures of forests and the ocean.

“But then we thought about grabbing people’s attention and should use the one thing that the internet loves and cats were the obvious answer,” he added.

He said he loved the idea as it was “very subversive, as there’s nothing anyone can do about it”.

“If you can’t have a real cat, this will be the next best thing,” he added.

This is what it looks like right now, as reported by metro.co.uk. What are you waiting for? 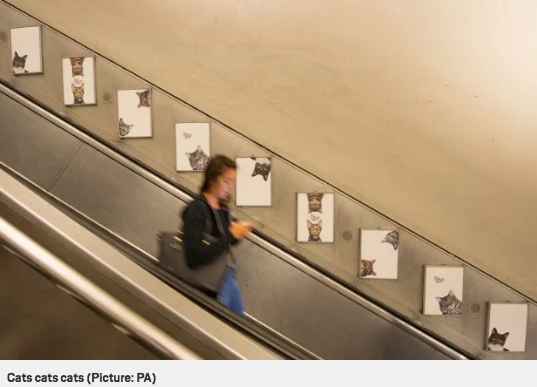 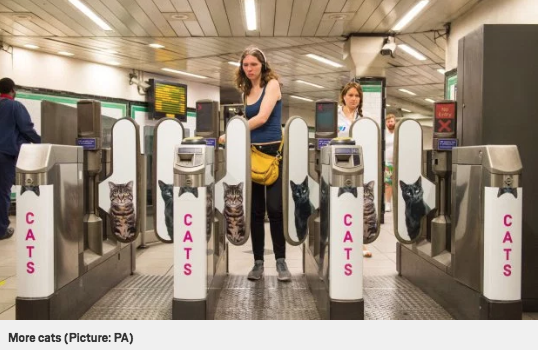 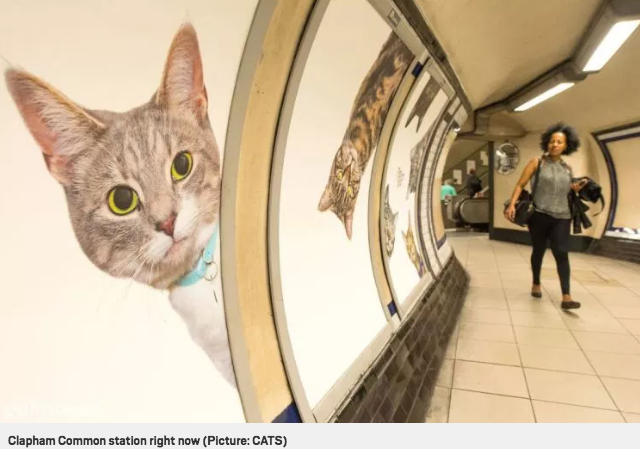 The first reader who sends me a photo of him/her posing in front of the cat ads will receive a free autographed copy of Faith Versus Fact. This offer expires in one week.

18 thoughts on “British ailurophiles: Get your tuchas to Clapham Common Tube station, where there are no ads—just cats!”