Stephen Knight, aka “The Godless Spellchecker”, is punctilious in checking his and other people’s sources, which has resulted in his calling out prominent figures for misquotation, or, in the case of C. J. W*rl*m*n, putting the kibosh on his career because of rampant plagiarism.

In a new article on his site, “A lesson in ‘journalism’ with Ansar and W*rl*m*n” (I can’t spell the second name lest I lose a bet), Knight did some checking on two claims. The first was this September 7 tweet by He Who Cannot Be Named: 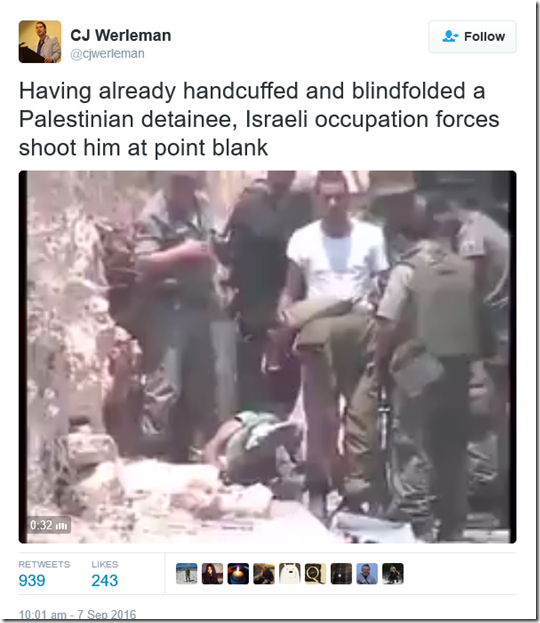 Apparently the man who emitted this tweet didn’t bother to check his sources; as Knight notes:

What [W*rl*m*n] fails to tell you however, is that not only is the footage from 2008, but the Palestinian detainee was shot with a rubber bullet, in the foot. Hardly desirable behaviour I’ll grant you – but it paints a slightly different picture than the one presented by Werleman. As a side note, the soldier responsible was arrested and convicted for his actions – by Israeli authorities.

. . .Cast your mind back to the time Werleman shared a similar video which he claimed to show ‘Israeli soldiers beating and torturing Palestinian detainees in occupied West Bank’.

Unfortunately for Werleman the soldiers were not Israeli. The detainees were not Palestinian. This wasn’t even the West Bank. This was footage of the Guatemalan army mistreating civilians. It seems nothing has been learned since this humiliating episode.

Go to Knight’s site to see the fun. Well, we’re used to W*rl*m*n’s sleazy behavior, but here’s a really irksome case. There’s a picture of Sam Harris circulating on Twitter along with a sentence he supposedly uttered: 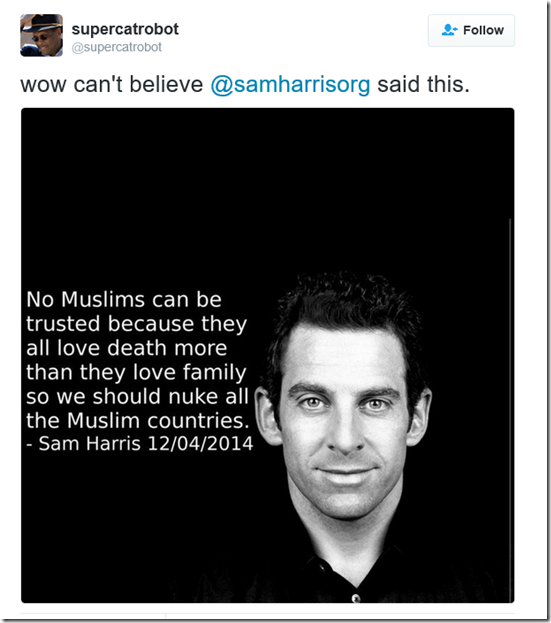 Knowing Sam, and having read most of what he’s written, I was unfamiliar with that quote, and simply didn’t believe it. Seriously, do you think Harris would say “we should nuke all the Muslim countries”? That doesn’t even sound like his style of writing or speaking.

Well, Knight did his usual digging and found that this picture and quote had been retweeted by Ashgar Bukhari, whom Knight describes as “founder of the soft-Islamist group the Muslim Public Affairs Committee” and “the gentleman who claimed that ‘Zionists’ had stole his shoe.” (Remember that “shoe” video?)

It was also passed along by writer and commentator Mo Ansar, who has been largely discredited for fraudulent misrepresentation of his credentials.  Ansar became the voice of “moderate” Islam in Britain, but—see the video at Knight’s site—was actually an extremist who thought that thieves should have their limbs amputated.

Pressing Ansar for the source of Harris’s quote, Knight found out that, as expected, it was completely fabricated. Go to Godless Spellchecker to how Ansar waffled and sputtered when pressed for his sources. Ansar also managed to use the quote to tar the Qulliam foundation as a way of getting back at Maajid Nawaz, who had exposed Ansar’s extremism.

As we’ve seen, one of the manifestations of hatred for the New Atheists, even on the part of other atheists, is their willingness to take quotes out of context—Harris is particularly susceptible to this treatment—or, as in this case, to simply make up quotes. So willing are people to believe this stuff that they simply don’t bother to check. There’s a lot of bad faith out there, even among the godless, but not, praise Ceiling Cat, the Godless Spellchecker.