“Lucy” is the skeleton of an Australopithecus afarensis female, dated at 3.18 million years old and discovered by Donald Johanson’s team in 1971 in the Awash Valley of Ethiopia. Lucy has become famous because, with 40% of the skeleton recovered, all in one place, she gave a remarkably complete picture of what one of our ancestors  may have looked like soon after splitting off from our common ancestor with modern chimps. (Note: we’re not sure that modern humans are really descendants of Lucy’s species).

In short, Lucy was short (3 feet 7 inches, or 1.1 meters), an adult, and had a brain the size of a modern chimp (450 cc; modern chimps are about 400 cc and  humans are about 1150 cc). She could clearly walk bipedally, as her pelvis and legs were clearly adapted for upright walking. We also have the Laetoli footprints of two hominins walking upright—probably also A. afarensis but dated even older than Lucy (3.7 mya). Nevertheless, Lucy had fingerbones that were curved, like those of apes, suggesting that her species had either not lost all traces of their arboreal past, or that A. afarensis still clambered about in the trees.

In fact, a new paper in Nature by John Kappelman et al. (reference below, free access at link) suggests that Lucy met her death by falling from a tree. Although that conclusion is a bit controversial, the evidence shouldn’t be sniffed at. What is that evidence? 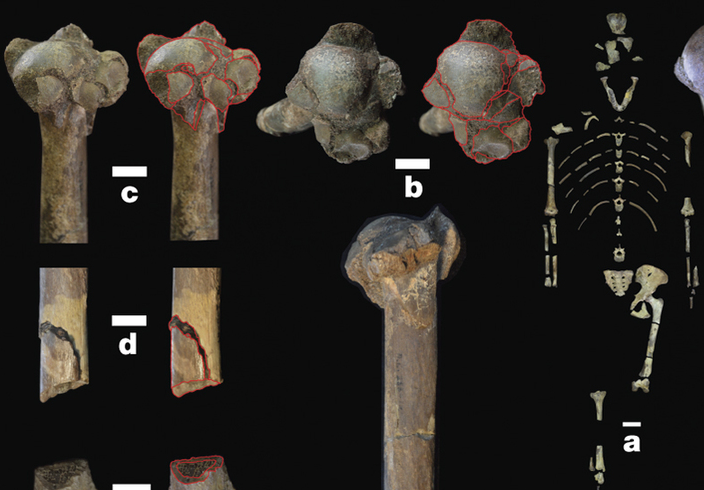 The fact that these fractures remained together suggests to the authors that the cracking occurred while Lucy was still alive rather than long after death, for they’ve stayed within the joint capsule, and would likely have been scattered on the ground had they been a postmortem cracking of the bones during natural burial. It also suggests that if Lucy’s death—due to both bone breakage and organ damage (the latter possibly caused by splintering bone)—was due to a fall, she stretched out her arms after she had struck the ground (see below), and thus was conscious immediately after she struck the ground.

The head of the other humerus, the left one, also shows some fracturing too, though the damage isn’t as extensive.

The pelvis is really screwed up! Look at these putative fractures: 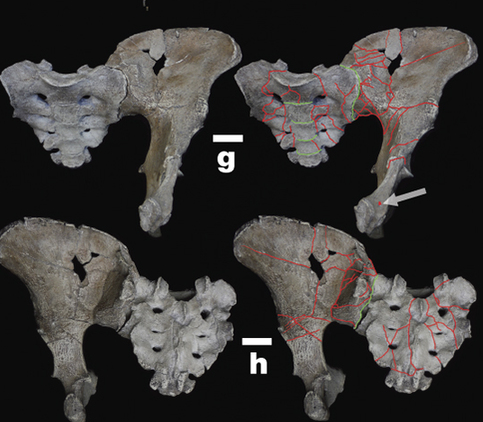 So what happened to Lucy? Because both the arms and legs are fractured, the authors conjecture that Lucy fell considerable distance out of a tree, with the legs striking first and then the arms outstretched to break the fall. The authors give a diagram, and I’ve added the figure legend from the paper:

What was Lucy doing up there? The authors suggest that she was nesting, just like modern chimps make nests high off the ground. The height of chimp nests (8-21 meters) is sufficient to kill an animal that falls from them.

Could anything else have caused the fractures? The authors note that you could get similar fractures if the body collided with objects in a flood; if a big animal hit Lucy at high speed, or if she suffered seizures, perhaps caused by a lightning strike. But they claim these occurrences are not only uncommon, but the pattern of Lucy’s fractures is absolutely consistent with those of modern people who fall from considerable heights.  And we know that modern chimps have been killed by falling from trees.

But were there trees in that area when Lucy lived? Good question! The authors say that in the area near the village of Hadar, where Lucy’s skeleton was found, was indeed probably a “grassy woodland with sizable trees.” That evidence comes from fossil pollen, the location of the skeleton (near a water channel that probably harbored nearby trees), and isotopic evidence.

Do other experts agree? Well, not completely. Carl Zimmer interviewed several people for an article on this in the New York Times (which I just read after I wrote the above), and they disagree on whether these are even fractures, and, if so, if they resulted from a fall. And even if they resulted from a fall, maybe Lucy fell not while nesting, but for other reasons. One of the doubters is Don Johanson, who discovered Lucy. Here are some quotes from Zimmer’s piece:

But other experts said Dr. Kappelman and his colleagues had not done enough to rule out other explanations for the fractures.

Ericka N. L’Abbé, a professor of anthropology at the University of Pretoria in South Africa, said that when living bones break, some parts bend. A close inspection of Lucy’s bones might have revealed traces of that bending.

“The major drawback is that they didn’t look under a microscope,” Dr. L’Abbé said.

Dr. Johanson [who discovered Lucy] said it was far more likely that the fractures Dr. Koppelman attributes to a fall had occurred long after her death, as her skeleton was buried under sand.

“Elephant bones and hippo ribs appear to have the same kind of breakage,” Dr. Johanson said. “It’s unlikely they fell out of a tree.”

. . .Some researchers have argued that by Lucy’s time, our forerunners were no longer good tree-climbers, having evolved to find food on the ground. “Australopithecus afarensis was essentially a terrestrial animal,” Dr. Johanson said.

. . . .Dr. Kappelman and his colleagues considered the possibility that Lucy fell out of a nest in which she was sleeping. Chimpanzees build their nests an average of 40 feet above the ground. A fall from that height could have killed Lucy, the scientists calculated.

But Nathaniel Dominy, an evolutionary biologist at Dartmouth College, considers it unlikely. “For me, the much more likely scenario is that she was climbing for food,” he said.

Chimpanzees sometimes gather honey from hives that are far above their nests. They have to use one hand to hold on to a branch while jabbing a stick into a hive with the other.

“Lucy was just enduring the stings as a chimpanzee would. It would be intense,” Dr. Dominy said.

The upshot.  I’m not completely convinced that this represents a fall, especially in light of Don Johanson’s worries that the “fractures” represent postmortem events due to burial. But this is still intriguing, and shows that things remain to be learned from what is probably the most well studied hominin fossil of all time. If these do represent fractures sustained during a fall, it would be cool, for it would give us strong evidence that A. afarensis was still living part-time in the trees even after it had evolved the ability to walk upright on the ground.