Apart from angry letters I get from believers—or kinder ones in which they pray for my salvation—perhaps the most frequent genre of emails in my box is about the historical Jesus. While I’m about 99.9999999% sure that any Jesus person who lived wasn’t divine, the son of God, or a miracle worker, I’m not all that sure there was a real human being around whom the Jesus myth accreted.  Just looking at the evidence as a scientist, I find no evidence for Jesus’s existence as a historical person except in Scripture, and the different gospels tell different stories. Most telling is the complete absence of good evidence for Jesus from people writing during the time when he was supposed to have lived, especially the Jewish philosopher Philo, who would have been a contemporary of Jesus. If Jesus had such a huge impact on the Jews and on Palestine, why didn’t anybody notice it? Why are there no descriptions of the earthquakes and people rising from their graves when Jesus was crucified?

But my doubt angers Christians. If they can show that a historical Jesus-person exists, they think—wrongly—that they’ve gone most of the way  towards establishing Jesus as the Messiah. To even doubt that such a person existed, well, that nips their claim in the bud. (Of course, even if such a person did exist, Christians would, as Hitchens used to say, “have all their work ahead of them.”)

I know Bart Ehrman thinks there was a historical (though not a divine) Jesus, and I’ve read his “evidence,” but haven’t found it very convincing. And the other “evidence” for a historical Jesus person is either fraudulent, derived from scripture, or are second- or third-hand accounts from people who wouldn’t have been contemporaries of Jesus and are simply repeating what other Christians said. So I don’t have a firm opinion one way or another. And yes, I know that the mantra here is “Nearly all reputable scholars and historians admit that there was a real Jesus-person,” but we scientists don’t accept truth simply because there’s a consensus. In fact, I think that consensus is based on evidence that’s pitifully thin.

For a handy summary of the evidence used to adduce the existence of a historical Jesus, I’d recommend the short and easily digested post on Rosa Rubicondior, “The historical evidence for Jesus.” I can’t vouch for all the author’s claims (though what I do know is accurately represented), but there’s a handy table giving all the early writers and theologians whose words are used as evidence for a historical Jesus. At least you can see the lack of evidence in one short-ish post.

There’s also a very lively argument with the author in the comment section. 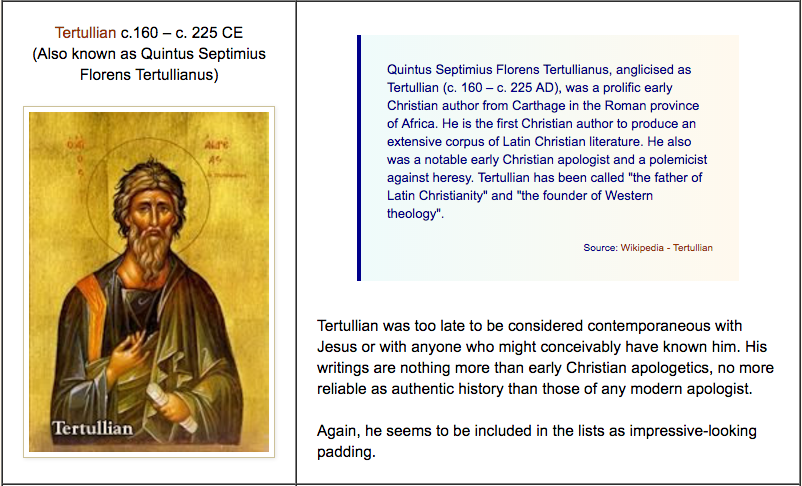 192 thoughts on “Not much evidence for a historical Jesus”