Let me begin by saying two things. First, yes, in Islam wearing a hijab (the head covering) is a sign of virtue, designed to prevent men who cannot control their raging lust from seeing your salacious hair. It is a garment of modesty. But by “virtuous” above, I mean, this: you’re not a better person because you wear a hijab. All you are doing is displaying your adherence to one of the world’s many forms of superstition.

Second, this post is not meant to encourage bigotry against Muslims. Those women who wear a hijab have every right to do so, and are not bad people because they do so, although the hijab is probably a sign of coercion far more often than we think. Nevertheless, it’s laudable for people to fight bigotry: the unwarranted prejudice against someone on the basis of ethnicity or adherence to a religion.

But in these days of Regressive Leftism and Virtue Twerking (see Grania’s earlier post), people often seem to post not to reduce bigotry or improve society, but to congratulate themselves for not being bigots. Often these posts center on hijabs, and, to me, boil down to this statement “I am awesome for not being a racist. I am not a racist because I don’t hate women who wear headscarves.” (For one blatant example, see here.)

I became aware of another example from the Twi**ter feed of Sarah Haider, once a Shia Muslim and now, a nonbeliever, a co-founder and outreach director of Ex-Muslims of North America:

Why should a Muslim Olympian be remembered as an athlete, when she could be a token to make a political gesture? https://t.co/3gYsCl6S7Y

Here Haider is talking about Ibtihaj Muhammad, the American Olympic fencer who wore a hijab under her headpiece during competition. For this Muhammad has been lauded as a role model, as having made history, and for showing exemplary courage. But Muslim women athletes who don’t wear the hijab are no less courageous—in fact, they could be seen are more courageous by bucking the social pressure to cover your hair. What is being celebrated seems to be not Muhammad herself, but her hijab, and I’m not wholly comfortable with that.  (I do recognize that it’s also a self-congratulatory gesture by the U.S. on our supposed liberality.)

Yes, Muhammad has reported sporadic cases of bigotry against her, as has surely every black athlete on Team U.S.A., but I don’t see that as heroic. Persistent, yes, determined, yes, and tenacious, yes, but an American hero? Not to me. Sarah Haider, who speaks openly of her apostasy, thereby risking death or injury, is a greater hero. As is Ayaan Hirsi Ali, who travels with an armed bodyguard in the face of many death threats—all for speaking up against the oppression of Islam. Wearing a headscarf in the U.S. is simply not a gesture worthy of the term “heroic.” You want heroic? How about not wearing a headscarf in Saudi Arabia?

The article cited by Haider was by W. Kamau Bell on CNN, and was a plea to Michael Phelps (written as a letter to him) to make a “noble gesture,” stepping aside as the U.S. flag-bearer in favor of Muhammad in the opening ceremonies of the Olympics. (He was voted flag bearer by his fellow athletes on the basis of his amazing performances, with Muhammad coming in second. And he ultimately carried the flag on the day Bell wrote his piece.) But why this plea? To show how open and liberal America is, of course—for making a hijab-wearer a symbol of our country. And, of course, to publicly denigrate Donald Trump and his bigotry. As Bell notes in his plea to Phelps:

Your stepping back will allow this moment to become something bigger than just another opening ceremony. No offense, but right now America has enough tall, successful, rich white guys hogging the spotlight trying to make America great … again.

No offense, indeed! Except, perhaps, to Mr. Phelps, who won more gold medals than any other American Olympian.
But why Muhammad instead of, say, a yarmulke-wearing Jew (if there are any on Team USA)? After all, on a per capita basis American Jews suffer twice as many hate crimes as do Muslims. Can you even imagine CNN asking Phelps to step aside in favor of a Jew sporting a skullcap? Of course not. But why not?
Or why not a black athlete who doesn’t wear a hijab? After all, the greatest social unrest in the U.S. today is based not on religion but on race.
And why not an athlete who doesn’t have Muhammad’s history of anti-Israel tweets, as you can see here? Below I’ve put a few, which at the very least are distortions and, for the first two, outright lies (there are many more). 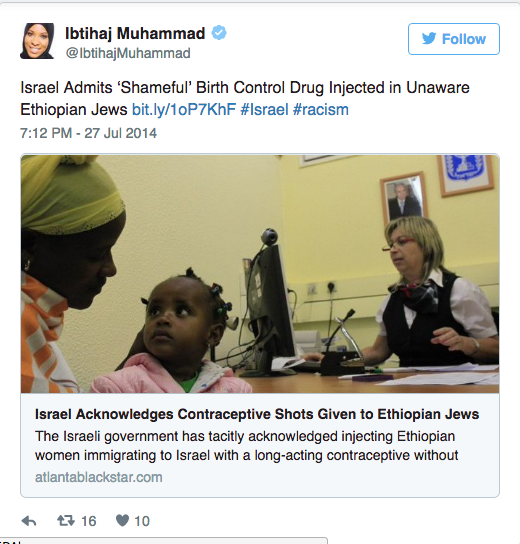 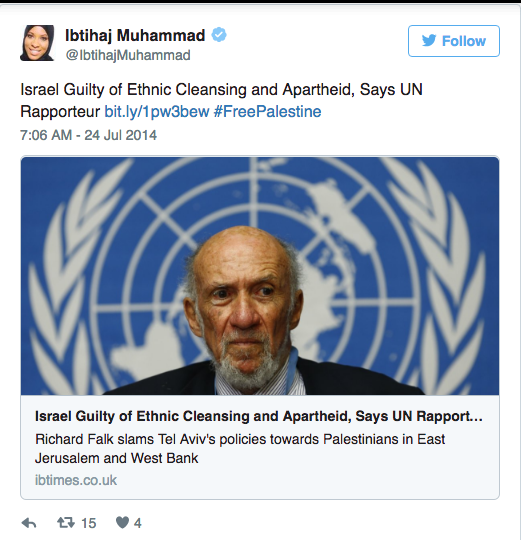 Is this the kind of comity we want our flag-bearer to instantiate? Is this what we want as our symbol of America? Did Hillary Clinton know about this when she paraded her own virtue?:

I doubt you’ll find anything close to Muhammad’s lies and hatred on the Twi**er feed of Michael Phelps. Muhammad is simply a dupe for false stories about the nonexistent Israeli dam and the distorted story of birth control drugs (women asked for them and then lied when their husbands found out); and Israel does not, of course, practice apartheid. Muhammad has simply used those lies to gin up public hatred of Israel. Some hero!

So kudos to Muhammad for following her dream. But no kudos to those who, as Haider says, want to use her as a symbol to feel better about themselves. We all agree that people should be able to wear whatever clothes they damn well want, but perhaps what’s in order is a little less self-congratulation about our open-mindedness, and a little less celebration of a garment that, in the end, is a sign of anti-Enlightenment values.

91 thoughts on “Wearing a hijab is neither virtuous, courageous, nor heroic”