All over the skeptical/rational blogosphere, people are calling out those Olympic athletes, including Michael Phelps, who have tried to improve their performance via “cupping therapy“: putting small glass bells over parts of the body and creating a vacuum in them that breaks blood vessels below the skin, producing a circular bruise.   Here’s Michael Phelps getting cupped at the Olympics: 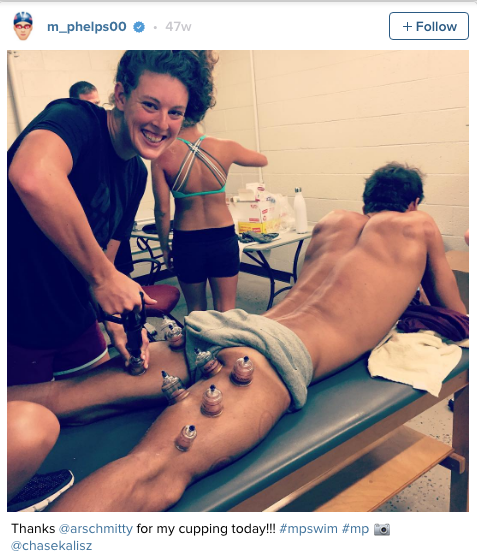 And in action, with his bruises clearly visible: 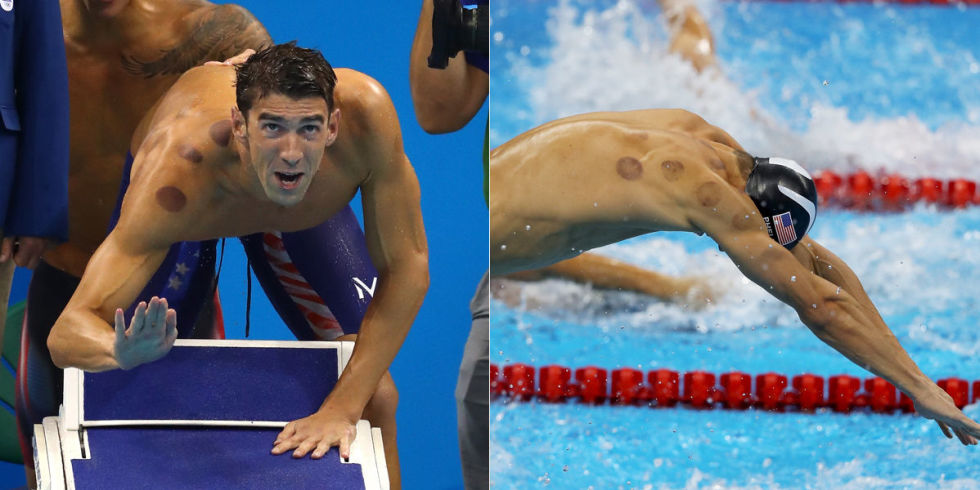 Many athletes seem to be using this technique:

In principle, this ancient therapy seems unlikely to have any salutary effect on physiology, as all it does is break capillaries, but, as the New York Times reports, there’s some suggestive evidence that it can still be beneficial:

While there’s no question that many athletes, coaches and trainers believe in the treatment, there’s not much science to determine whether cupping offers a real physiological benefit or whether the athletes simply are enjoying a placebo effect.

One 2012 study of 61 people with chronic neck pain compared cupping to a technique called progressive muscle relaxation, or P.M.R., during which a patient deliberately tenses his muscles and then focuses on relaxing them. Half the patients used cupping while the other half used P.M.R. Both patient groups reported similar reductions in pain after 12 weeks of treatment. Notably, the patients who had used cupping scored higher on measurements of well-being and felt less pain when pressure was applied to the area. Even so, the researchers noted that more study is needed to determine the potential benefits of cupping.

Another experiment involving 40 patients who suffered from knee arthritis found that people who underwent cupping reported less pain after four months compared to arthritis sufferers in a control group who were not treated. But the cupped group knew they were being treated — it’s not easy to blind people about whether a suction cup is being attached to their leg or not — and so the benefits might have been due primarily to a placebo effect.

And indeed, if there are effects on athletes, they probably are placebo effects. But placebo effects are real; we don’t know how they work, but simply the idea that you’re being treated can improve many things, including depression.

In fact, “active” placebos: drugs that give you a physiological “side effect” but don’t treat the condition, are even better than “passive” placebos that have no effect you can perceive. That is, depressed patients given atropine, whose effects you can perceive, don’t do appreciably worse than traditional antidepressant medication, and both do better than patients given “passive” placebos like sugar pills. Patients given no treatment do worst of all. There was even one experiment (no longer considered ethical) showing that patients who had “sham” knee surgery, i.e., who were cut into but not really operated on, had outcomes as good as those of patients with real knee surgery.

It is unethical for doctors to prescribe placebos, but I find that regrettable, though wholly understandable and the ethical thing to do, for prescribing placebos involves deceiving the patient.

Phelps and his fellow athletes aren’t being deceived by anyone but themselves, but so what? Lots of athletes have superstitious practices: using lucky bats in baseball games, making the sign of the cross before games or after goals, wearing “lucky” clothing, and so on. That kind of stuff hurts no one. Making the cross, “Tebowing” after a touchdown, and so on are no less harmful, for they validate religious superstition in the public eye. “Cupping”, as a performance enhancer, is unlikely to catch on as a substitute for genuine medicine given for an illness.

In fact, I bet many of us have such superstitious practices. I have a lucky number, which I won’t reveal, and many readers probably have objects they consider “lucky”. This, like cupping, is a harmless superstition. In fact, “proper” cupping, because of the placebo effect, may be far more useful than that rabbit’s foot.

The problem, of course, is “improper” cupping: cupping that isn’t done by experts on pampered athletes. Over at Respectful Insolence, Orac points out some of the dangers, as in this man in China who tried cupping to help a form of arthritis, and wound up with what look like third-degree burns: 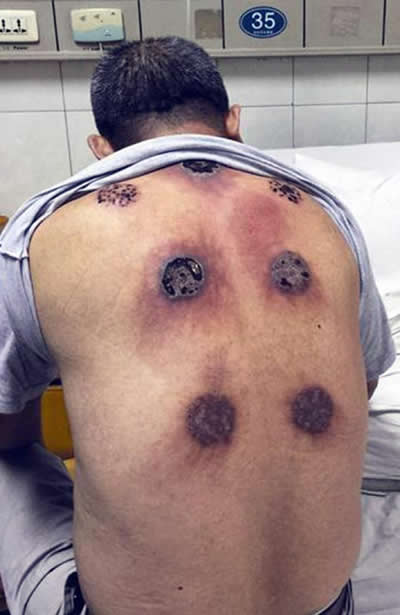 Cupping, then, can go horribly wrong. The problem with celebrities doing it in public is not that they look like dupes, but that they might encourage others to do the same. Not everyone who tries it will end up with trendy bruises and a positive outlook. The public, then, needs to know what can go wrong before they opt for such treatment. That is the responsibility of the press rather than the athletes, who are surely ignorant of the problems. And the New York Times article fails in its responsibility here, even quoting Keenan Robinson, Phelps’s personal trainer:

Yeah, “not detrimental” when practiced as it is on Phelps. The Times should have at least mentioned possible dangers.

Still much of the vociferous calling out of Olympic cupping doesn’t highlight its dangers so much as constitute a form of virtue signaling: “See, I’m smarter than that stupid Michael Phelps.” In fact, one blogger has even said this about the cupping Olympic athletes: “these people are idiots.” Ignoring the fact that that statement is “ableist”, violating the website’s own norms, I’d hardly call them idiots, any more than I’m an idiot for having a lucky number. There may be small moieties of a person’s behavior that are irrational, but does that make them total “idiots”? Not in my eyes.

Michael Phelps is not an “idiot”, and if he feels more confident after cupping, he could even be called savvy. Whether or not this practice increases woo among the public is yet to be seen.

But if Phelps got homeopathic treatment for cancer, I’d be much more likely to criticize him.

I’ll finish by saying that the placebo effect has been demonstrated many times (and sometimes not), but appears to be a real phenomenon for some conditions. How it works is a great mystery, for inducing the belief that you’re being treated can somehow translate into both subjective and objective perception of improvement. I’d love to see more work on the phenomenon, but much of it is rightly viewed as unethical.

UPDATE: I’ve just read Hemant’s report on cupping at The Friendly Atheist, and he, too, calls it out as worthless, but fails to mention the possible dangers except for wasting money on useless treatments.  He also mentions, as I did, athletic superstitions:

They’ll wear special socks during big games, refuse to shave their beards during the playoffs, go through a certain ritual during warm-ups, etc. Yes, it gives them confidence. It’s be foolish, however, to think their actions have any real, tangible effect.

But that’s wrong. A placebo effect is a “real tangible effect.”

112 thoughts on “Is the “cupping” of Olympic athletes so awful?”