I’m on the road today (or rather, on the rail), so enjoy this video of John Oliver on the latest issue of “Last Week Tonight.”  Oliver, the true heir of Jon Stewart, demonstrates with his characteristic excitability why real journalism is dying.

And we know that’s true—at least in the United States, for many journalistic “aggregator” outlets don’t charge for access, relying either (like PuffHo), on writing slaves who get nothing but publicity for their contributions (or so I was told when HuffPo tried to exploit me), or on ad revenue. Either way, the market for serious, decently-paid journalists is dying, and when it’s gone, we’ll have clickbait and endless Kardashiana as our daily fare. The New York Times will be the last credible paper in America.

But I fulminate; let John Oliver say it in a much funnier (and more informative) way:

Curiously, this video was highlighted at PuffHo, which apparently didn’t even look at the first minute of Oliver’s rant, which includes this bit made into a screenshot: 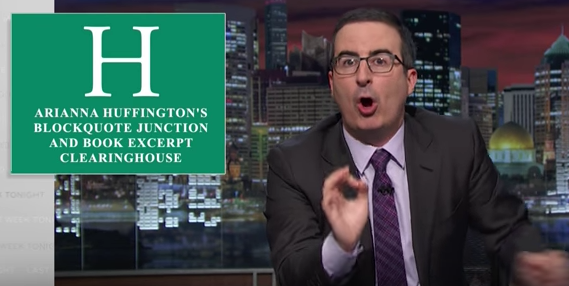 40 thoughts on “The death of journalism”