By the title above I mean “evolution in animals that adapts them rapidly to urban areas,” not “changes in cities.” The former is the subject of a piece in today’s New York Times by Menno Schiltzhuizen, “Evolution is happening faster than we thought.” (Schilthuizen is a professor of evolutionary biology at Leiden and also works at Netherland’s Naturalis Biodiversity Center.)

Schilthuizen’s point is that evolution can work very quickly, contravening the conventional wisdom that evolution is always very slow. His examples involve animals and plants adapting to urban environments, where all of a sudden you’re thrown into a radically different habitat, one in which selection can be quite strong. All of a sudden you encounter noise, pollution, high temperature, cement, and so on. He gives a fair number of examples of “rapid urban evolution,” and here’s one that I liked:

French biologists have been studying a daisylike weed called Crepis sancta [JAC: that link didn’t work for me, but this one does], which normally produces two kinds of seeds: heavy ones that fall to the floor, and light seeds that drift in the wind for long distances. But in Montpellier, in southern France, C. sancta makes reduced numbers of the airborne seeds. Small wonder: The plants grow in pockets of soil on sidewalks, and any seeds that are carried on the wind are likely to land on concrete. The heavy seeds that land at the parent plant’s feet, on the other hand, are pretty certain to find a patch of fertile soil. So plants genetically predisposed to produce more heavy seeds have been favored by urban evolution.

Of course a captious biologist like me has to pick a few nits, but I’m not going to say “I don’t want to nit-pick, but.  . . “, for people who say that actually do want to nitpick! However, Schilthuizen’s piece is quite good, and I learned about some nice examples from it; only I want to add two points to his message:

First, we’ve known for decades that evolution can be quite fast when there’s a drastic environmental change or when an animal or plant invades a new habitat. Since the rate of evolutionary change is directly proportional to the “selection differential” (the difference in a trait between the mean of the original population and the mean of population that leave offspring in the new environment), an increase in the strength of selection will naturally speed up evolution (all things equal).  And we’ve seen this happen in human lifetimes. The classic work is Peter and Rosemary Grant’s finding that the beak size of medium ground finches (Geospiza fortis) in the Galápagos increased 10% in only one generation when there was a drought in 1976. That was because only big species of plants survived, and those bore bigger seeds. Only those finches with larger beaks could crack the seeds and get food, so there was strong selection for big beaks. A 10% change in one generation is a very strong rate of evolution.

I give more examples in Why Evolution is True, and John Endler, in his book Natural Selection in the Wild, gives several hundred. We’ve seen herbicide resistance evolve in plants, insecticide resistance in mosquitoes, and of course, antibiotic resistance evolve in microbes. So it’s not quite true, as Schilzhuizen says, that “recently, we have come to understand that evolution can happen very quickly, as long as natural selection. . . is strong.” We’ve known that all along, and have seen it. What’s novel about Menno’s piece is that he’s demonstrating strong selection due to urbanization. (I’ll let you read his piece to see the other nice examples.)

The other issue is whether changes we see are really genetic changes as opposed to developmental alterations or learning that occur in a new environment. The changes in Crepis noted above are truly genetically based—as are reductions in “nervousness” in blackbirds discussed by Menno.  The way to demonstrate that is to rear individuals from urban and nonurban environments in a “common garden” (the same environment, preferably an intermediate or “neutral” one), and see if they maintain the differences we see in the wild. If they remain different, then the character differences, such as the seed weight in Crepis, must be due to true evolutionary-genetic differences among populations. (I define “evolution” as most of us do—as genetic change in populations.)

But I’m not familiar with all the cases discussed, and it may well be that some differences we observe among populations might be either learned (in the case of animals) or developmental. For instance, in the first half of the 20th century blue tits and great tits suddenly begin piercing the aluminum  tops of milk bottles and drinking the cream. (Remember the days when milk was delivered to your door? I do.) This was a learned, not an evolved, response, and spread through populations quickly. Now if you’d taken blue tits from a truly rural population, and compared them with an urban population, you’d see a difference in behavior. But that was learned, not evolved. To see if it was evolved, you’d have to hand-rear blue tits in the lab and then see if, when faced with milk bottles, they behaved differently. I don’t think anybody ever showed that.

In the case of Anolis lizards (a case not cited by Schiltzhuizen), researchers found that lizards placed on small islands with more trees got longer limbs in a few generations. There was a paper published in Science about this, implying that this was true evolutionary change due to selection for better climbing ability. When I read the paper I thought, “They don’t know that—they never reared lizards from different islands in a common environment.”  Sure enough, when they did that, they found that the differences in limb configuration were purely developmental: that climbing on Tinkertoy “trees” made your legs longer. The authors had to admit that they hadn’t really found a case of rapid evolution.

This is all to say one thing: if you see a population change over time, that doesn’t mean it’s evolving. You have to test that using special experimental designs. And with that caveat, I recommend you read Schilthuizen’s piece.

Finally, here’s a great tit that has learned to pierce the aluminum caps of milk bottles. Why do they drink only the cream and not the milk? Because birds can’t digest lactose, which is present in milk but not cream! And cream, of course, is loaded with fat, which provides energy much needed by birds: 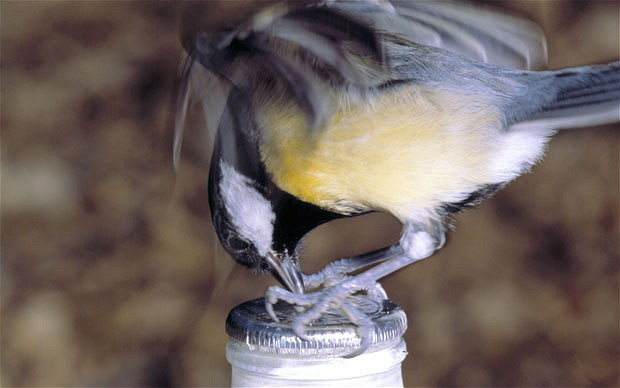