Micheal Eisen, a well known geneticist at UC Berkeley, has weighed in on genetics and l’affaire Mukherjee on his website It is Not Junk. As you’ll see from his post (click on the screenshot below to go there), he thinks that Mukherjee way overrated the significance of epigenetics in his New Yorker piece. I like the title of his post, and love the subtitle, which you’ll recognize as a variant of Arthur Clarke’s Third Law. 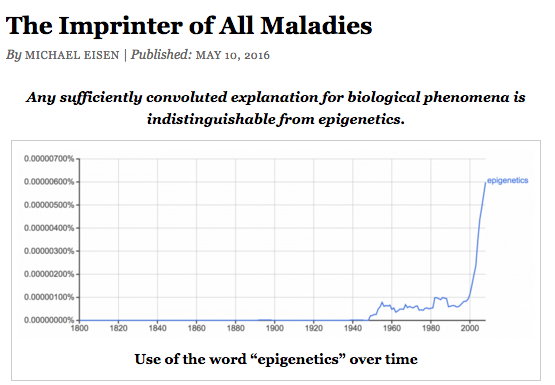 Just a few excerpts (indented) and my comments:

Biologists now invoke epigenetics to explain all manner of observations that lie outside their current ken. Epigenetics pops up frequently among non-scientists in all manner of discussions about heredity. And all manner of crackpots slap “epigenetics” on their fringy ideas to give them a veneer of credibility. But epigenetics has achieved buzzword status far faster and to a far larger extent than current science justifies, earning the disdain of scientists (like me) who study how information is encoded, transferred and read out across cellular and organismal generations.

True, and I’m not quite sure why it’s become a buzzword. One explanation is that it somewhat circumvents genetic determinism by suggesting that the environment, your behavior, or even (à la Chopra) your will can change your genes, perhaps in a heritable way. That makes it appeal to those Leftists who don’t like genetic determinism. Also, epigenetics has been construed as eroding the modern theory of evolution by suggesting (wrongly) that evolution can occur in a Lamarckian way—through the inheritance of environmentally acquired “DNA marks. People always love the notion that “Darwin was wrong”—although in this case it wouldn’t hold, as Darwin himself had a Lamarckian view of inheritance. But “epigenetics” is a buzzword among geneticists, too, and I’m not quite sure why.

Eisen on Mukherjee and the science he conveys in the New Yorker piece:

In one way this debate is incredibly important because it is ultimately about getting the science right. Mukherjee’s piece contained several inaccurate statements and, by focusing on one aspect of Allis’s work, gave an woefully incomplete picture of our current understanding of gene regulation.

Any system for conveying information about the genome – which is what Mukherjee is writing about – has to have some way to achieve genomic specificity so that the expression of genes can be tuned up or down in a non-random manner. Transcription factors, which bind on to specific DNA sequences, provide a link between the specific sequence of DNA and the cellular machines responsible for turning information in DNA into proteins and other biomolecules. Small RNAs, which can bind to complementary sequences in DNA, also have this capacity.

But there is scant evidence for sequence specificity in the activities of the proteins that modify DNA and the nucleosomes around which it is wrapped. Rather they get their specificity from transcription factors and small RNAs. That doesn’t render this biochemistry unimportant – the broad conservation of proteins involved in modifying histones shows they play important roles – but ascribing regulatory primacy to DNA methylation and histone modifications is not consistent with our current understanding of gene regulation.

Yes, and count on a scientist, rather than a journalist (unless he’s Carl Zimmer) to report the science accurately. It is the specificity of gene action that Mukherjee is interested in: after all, he began his piece with a discussion of cellular differences—between identical twins and, later in the piece, between cells within a body, all of which start with a single undifferentiated cell, the egg. And we know that specificity of gene action is conferred by small RNAs and transcription factors. We don’t know the same for histones or epigenetic markers.

But I digress. I see there are now a lot more articles on the Internet about this argument, which in the end IS about getting the science right (although it seems to also be about not looking bad if you’re famous). But I can’t be arsed to talk about every piece. Just Google “Mukherjee epigenetics” if you’re interested.

19 thoughts on “Michael Eisen on epigenetics”