We’re beginning to see a recurring theme among the defensive responses to our scientific criticisms (here and here) of Siddhartha Mukherjee’s misleading piece on epigenetics in the New Yorker. So far, the responses of journalists (see here as well as below), of Mukherjee himself, and even of the New Yorker, are along these lines:

There are differing opinions on this issue. Since space is limited for hard-working journalists and word-limited magazines, we simply have to jettison alternative explanations in favor of stories that appeal to our readers.

The problem with Mukherjee’s piece, of course, is that he presented a story—that epigenetic markers and histone-protein modifications are THE mediators of differential gene expression in differentiated cells, working as a kind of “epigenetic code”—for which there is virtually no evidence. This was the cute and intriguing tale that he told readers of the New Yorker, who, of course, loved the good writing and assumed what Mukherjee said was accurate.

But what he left out—to the readers’ detriment—was the true story of gene regulation as we know it: a story identifying protein “transcription factors” and short bits of RNA as the factors that regulate gene expression. As Mark Ptashne and John Greally noted, neither Drosophila nor Caenorhabditis worms have DNA “markers,” yet both organisms—paradigms for the study of genetics and development—develop just fine, thank you. That alone should give pause to people like Mukherjee or the Epigenesis Mavens, and it comes on top of the lack of evidence for epigenetic or histone-regulated control of genes.

And yet the defenders continue to claim that it’s really okay to omit what we really know about gene regulation in favor of a well-written but completely speculative explanation for the same phenomenon.

That’s the problem with a piece on MukherjeeGate by Brian Resnick in Vox, “Why scientists are infuriated with a New Yorker article on epigenetics.” In fact, according to the Vox piece, that’s how the New Yorker itself continues to defend their indefensible piece:

And for it’s [sic] part, the New Yorker is standing by the story, too.

It is as if someone wrote an article on homeopathic medicine, adducing dubious evidence that it works, giving the opinions of homeopaths, leaving out the counterevidence that “scientific” medicine is the thing that really works, omitting the absence of evidence for the efficacy of homeopathic nostrums, and so on—and then defending such a piece by saying, “Well, none of our article negates the fundamental importance of scientific medicine, and the foundational work on those medicines done by a previous generation of physician-scientists.”

The New Yorker‘s defense is not only disappointing, but infuriating. It is just weasel words. It is unworthy of a magazine supposedly dedicated to factual reporting. It is the kind of answer you expect from politicians, not journalists.

The truth is that Mukherjee didn’t even mention transcription factors (or micro-RNAs that turn gene regulation down or off). It was completely ignored! It is to the New Yorker‘s disgrace that they justify an incorrect presentation of science in such a way.

In fact, according to Vox, even Mukherjee himself finally admits that maybe he didn’t do such a good job:

“In re-reading the piece in the light of the critics, I realize that I did not emphasize the role of transcriptional factors and regulation adequately,” Mukherjee writes in the email. “This was an error. I thought, sincerely, that I had talked about gene regulation, but an increased emphasis would have helped the piece, and not caused the polarizing response.” (He also mentioned that the New Yorker article is an excerpt from an upcoming book, which will cover these topics more thoroughly.)

Well, he didn’t emphasize the role of transcription factors in regulation AT ALL! But I laud him for the admission above, and perhaps the real story will be told in his upcoming book. Even so, a fuller presentation in a book cannot justify a misleading presentation in an excerpted piece.

Finally, Vox itself promulgates the “we didn’t have room to tell the truth!” trope. It does so by presenting Mukherjee’s epigenetic scenario as one “story”, and the protein-and-RNA-regulation scenario (which happens to be the truth) as a different “story”. Here’s a sidebar from the Vox piece: 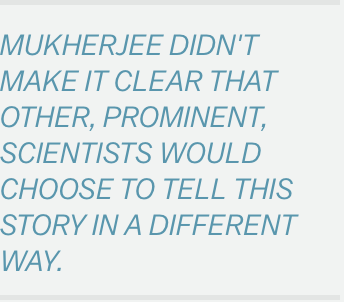 And it’s echoed in Resnick’s text (my emphasis):

I can’t fully analyze all the critics’ concerns in this post. But this seems clear: If Murherkjee is guilty of something, it’s omission. He didn’t make it clear that other, prominent, scientists would choose to tell this story in a different way.

There are a lot of challenges in science writing, but one of the main ones is this: Research more often yields streams of caveats, not elegant conclusions. This fact makes trouble for another truth: As a writer, it’s your job to take a reader from the beginning to the end of a piece as elegantly as possible. [JAC: Isn’t it the first job to convey truth, and then comes the elegance?]

There could be a lot of reasons why Mukherjee decided to focus on histones rather than transcription factors. They perhaps make for a more visual, compelling illustration of the inner workings of a cell. Maybe Allis was just a great interview, and a more compelling character upon which to carry the story’s narrative. [JAC: This is journalism?]

These choices are compounded by this: “The original piece was almost twice its current length, with a lengthy historical section mentioning gene regulation,” Mukherjee writes me. The print New Yorker only has so much space.

These choices aren’t always easy, but in journalism, they’re necessary. We can only tell one story at a time.

[Note the misplaced “only,” which should be between “tell” and “one.”]

Well pardon my French, but screw that! If journalists can present only one story at a time, how come good journalists are always careful to present opposing points of view? In fact, as I said yesterday, Mukherjee could have presented the best story—the one supported by evidence—in the generous space given him by the New Yorker. He chose not to do so, for presenting a decades-old and widely accepted story of gene regulation doesn’t have the panache of a shiny new hypothesis, even if that hypothesis has no evidence behind it. Why tell the truth when you can tell a shaky but provocative story, covering its flaws with blankets of fine prose?

What is going on here? My guess is that this “all stories are equal” view is the odious legacy of postmodernism, which sees no “truth” as privileged over another one. If that view, derived from the humanities, bleeds into science journalism, you get Resnick’s view that “we have to make choices, as we can’t tell every story.”  That doesn’t wash. If you want to choose a single story, choose the one best supported by the data. Vox has failed in its mission to provide good, unbiased science reporting.

There will be more stories about this in the press, I suspect. I hope, but am not confident, that they won’t take the “space limitation precludes us from telling the truth” attitude.

UPDATE: Wally Gilbert, Nobel Laureate, molecular biologist and retired Harvard professor, has this to say about the Vox piece (quoted with permission):

Yes that piece is bad–but the real problem with it is its statement of the problem: “In the story, what links these mysteries is the science of epigenetics, which, basically, explores how the environment can leave a lasting mark on how our genes work.”

This is fiction. Not fact. “What is being described as the “science of epigenetics” at best may explore how the environment leaves marks on our cells–the twins in his piece with their scars and their different behavior. But not on their germ line. The genes they pass on to their offspring are the same (if the aunt had children.)

Every statement of this form–lasting mark–suggests to the lay audience that Lamarckisnism is true–since lasting coupled with the word gene implies inheritance for the organism. (While to the expert one is discussing the division of cancer cells).

57 thoughts on “Dreadful science journalism at Vox: all interpretations of science are equal, but some are cuter than others”