Over at Quillette, Jeff Tayler, late of Salon, has written an eloquent and well documented essay: “Free speech and Islam—in defense of Sam Harris.”

I say “supposedly” in the last sentence because if there’s anything that characterizes the nastiest criticisms of Sam Harris, it’s that more often than not they’re based on either misunderstanding or deliberate misrepresentation of his claims. Most of us know this, but few people who engage in Harris-bashing bother to go back and read what he actually said. It’s just too easy to demonize him by name-calling or quoting, secondhand, Harrisophobes like Glenn Greenwald, Reza Aslan, or C. J. W*rl*man. Even Sam’s neo-utilitarian views on ethics get unwarranted criticism, I think. I myself take issue with some of his views on morality, but the ways they are criticized are all out of proportion to what was, in effect, a calm ethical treatise. After all, you don’t see philosophers going after Jeremy Bentham with the same vigor, even though Sam’s views are an updated version of Bentham’s.

I’ve long pondered why people make such vicious and unwarranted criticisms of Harris, even compared to other New Atheists like Hitchens or Dennett. I think there are two reasons.

First, Sam asks hard questions, and people don’t like to think about hard questions. Should we ever lie? Is torture ever justifiable? Is it even possible to even imagine a first strike against Islamic enemies? Is it possible that religion can really be a strong motivator for bad acts, including Islamist terrorism? Is our notion of “free will”—of agency—a complete illusion? Is it justifiable to profile people at airports based on their religious beliefs?

These questions need to be asked, not dismissed by slandering the questioner. But all too often they are dismissed, and Sam gets excoriated for even raising the question. “He’s in favor of racial profiling!”, they cry. “He’s an Islamophobe!” “He favors torture!” “He wants to nuke all Muslims!” None of these characterizations are accurate: they’re simply slanders that arise when Sam tries to make people wedded to identity politics examine their beliefs. But those people would rather do anything than question their beliefs.

The view that some questions shouldn’t be asked, that some ideas are too sacred to question, is inimical to a democratic society. It’s a valid question whether we should engage (as El Al does, and they’ve never had a terrorist incident) in profiling people based on their religious beliefs. Wouldn’t that be more efficient than examining 3 year old Finnish kids, or aged Christian priests in wheelchairs? It’s not “racist” to ask that question, and to examine its moral and practical implications. Is torture ever justifiable? I don’t know, for although it works sometimes, often it doesn’t, and we haven’t had an incident yet where I consider it justified. But it’s certainly worth discussing the issue in light of the American penchant for waterboarding and other horrible practices; and it’s worth discussing whether, even if it were justified in one case, it would have a detrimental effect on our democratic system as a whole.

When people have neither the energy nor intellectual acumen to deal with hard questions, they issue smears. They turn valid questions into violations of sacred, not-to-be-questioned tenets. And when that happens, democracy and Enlightenment values fall by the wayside. If anything is essential in an enlightened and progressive society, it’s the right—and necessity—to question accepted views and mores. That is, of course, the basis of freedom of speech. When that is prevented, as the Authoritarian Left is trying to do, then demagogues like Donald Trump step in to fill the gap.

Socrates was given hemlock for making Greek youth think about questions that were deemed dangerous. Harris has been given verbal hemlock for doing the same thing. He doesn’t deserve the opprobrium he gets, and many of his critics are guilty of willful distrortion of Sam’s views. The same thing has happened to philosopher Peter Singer for daring to even suggest that we might discuss the morality of euthanizing deformed or cognitatively disabled newborns. That is a discussion worth having, but it’s been deemed A Question That Can’t Be Asked; and, like Harris, Singer has become the object of hate and scorn.

Which brings us to the second reason people dislike Harris. It’s not a reason people like to discuss, as it shows a darker side of human nature. It’s jealousy. Sam is a public intellectual and has achieved considerable popularity (and notoriety!) in his writing about diverse religious and philosophical topics. As we know from the case of Carl Sagan and his successors, academics don’t like those who become famous by writing popular tracts in areas they see as their own bailiwick. Sam has done that for religion, and he’s done it for philosophy. The Australians call this the “Tall Poppy Syndrome”: a poppy that grows too tall has to be cut back. The Japanese equivalent is “the nail that sticks up should be hammered down.”

I think it’s undeniable that many people who criticize Sam are jealous of his success. They often imply as much, pointing with scorn at his “bestselling books,” and even saying that their own works haven’t achieved that much success. But they do this to criticize Sam, not realizing that by so doing they’re showing their own hand. If asked, they would–and do–vehemently deny that they’re jealous. But of course they would! Who would admit to such a base emotion? Regardless, I think it’s undeniable that criticism of Sam from some quarters is based largely on jealousy. If you claim that can’t possibly be true, I’d argue that you don’t know much about human nature.

At any rate, Jeff’s long article is an eloquent defense of Sam, and a telling presentation of how people have distorted Sam’s views. (There are a lot of links so you can check the claims for yourself.) I won’t reprise it as you simply have to read it. Then by all means give your reactions below. I’ll just add below three paragraphs that comprise the peroration of Jeff’s piece:

One cannot escape the impression that the attacks on Harris bear the stamp of sordid identity politics, with, under the guise of multiculturalism, truth sacrificed for the respect for retrograde customs.  But perhaps what irks Harris’ detractors most of all is the methodical way in which he demonstrates the link between Islamic doctrines and terrorist violence, and disassembles the case for religion, showing, through his work, that it is nothing more than “a desperate marriage of hope and ignorance,” yet a marriage that could be annulled by “making the same evidentiary demands in religious matters that we make in all others.”  (Both these quotes come from The End of Faith’s first chapter.)  By extension, Harris’ arguments collide with the identities of people finding community in religion.  If he were not succeeding in proving the case against faith, they and their apologists would not react to him with such vitriol.

An unwillingness to recognize the link between Islamic doctrine and terrorism in particular presages seismic political changes, with Western societies, fed up with Islamist violence and the inability of progressive governments to even speak frankly about it, lurching ever farther to the right.  (This is happening in Europe today, of course.)  But libeling Harris will not stop the next ISIS attack on Western soil, or slow that group’s depredations in Syria and Iraq.

Now more than ever, we need clarity on the relation between Islam and violence.  And we need to stop denigrating those, like Harris, capable of bringing us that clarity.

I do notice that there are lots of supportive comments after Jeff’s piece, and that’s a good sign. Here’s one of them: 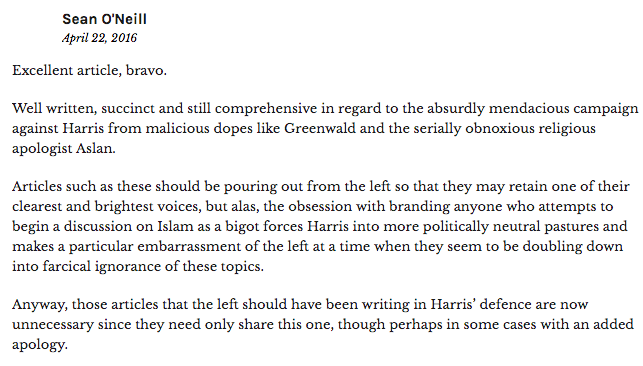 h/t: Peter Boghossian for discussing these issues with me

260 thoughts on “In defense of Sam Harris”