Stephen Knight, the Godless Spellchecker, has done another bit of sleuthing and found out, sadly, that Ed Husain, the co-founder of the anti-religious-extremism think tank Quilliam (the other founder was Maajid Nawaz) appears to be an evolution denialist—or at least a questioner.

Here’s the first tw**t from Husain,

It was followed by followed by some pushback by geneticist and science writer Adam Rutherford as well as journalist and t.v. presenter Nicky Campbell. Husain replies to the pushback with a definite indication that he doesn’t accept evolution (it’s other people’s “theory”, he notes but doesn’t seem to comport with “Husain’s own facts”). 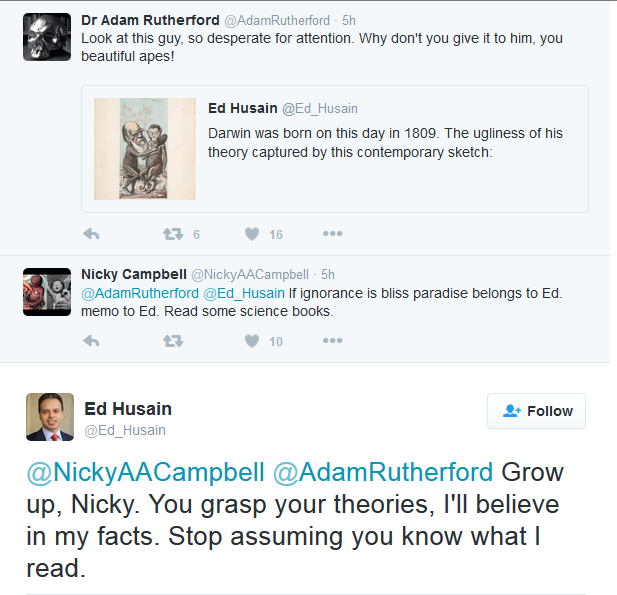 Husain then follows with a snarky remark about the evolution “cult”:

Crikey. Didn't quite realise yesterday was a holy day for Darwinists. Very cultish responses to my tweets yesterday. Evangelical atheism.

Husain doesn’t appear to be on staff at Qulliam any longer, so this is not on Maajid Nawaz’s watch. Still, according to Wikipedia, Husain is on several “moderate” faith organizations, and it doesn’t help his credibility if he denies one of the most well established facts of science.

Ed Husain (born 25 December 1974) is a writer, adjunct senior fellow for Middle Eastern studies at the Council on Foreign Relations in New York, and senior advisor at the Tony Blair Faith Foundation. Husain is the author of The Islamist, a book about political Islamism and an account of his five years as an Islamist activist. Husain cofounded, with Maajid Nawaz, the counter-extremism organization the Quilliam Foundation.

He has also worked for HSBC Private Bank and the British Council. In 2014, he was appointed to the Freedom of Religion or Belief Advisory Group of the British Foreign and Commonwealth Office. He is also a member of the Independent Review Panel for the Global Community Engagement and Resilience Fund (GCERF).

In a way I’m glad Husain is no longer affiliated with Quilliam, as the organization would then be tainted by his antievolution views. Still, when has it become acceptable for someone in England to publicly deny evolution?

Husain is still a Muslim, and the majority of Muslims deny evolution, so perhaps it’s his faith still speaking. But the less closely “moderate” Islam is associated with creationism, the more credibility it will have.