Well, this is going to be an interesting election season, though I don’t see any good outcome. Bernie Sanders has moved way ahead of Hillary Clinton in Iowa, so perhaps he has a crack at the Democratic nomination—though I still wouldn’t bet on it. And even if a Democrat is elected in November, be it Clinton or Sanders, not much will happen,for both will be deadlocked with a Republican Congress, though for different reasons. Meanwhile, the GOP camp continues as a source of amazement, with Trump and Cruz going after each other hammer and tong. There’s not a credible leader among them, which speaks very poorly of Republicans (and our country in general).

The latest LOL is Sarah Palin’s endorsement of Donald Trump yesterday in Iowa. I’ve embedded her speech below. If you can watch the first three minutes without gritting your teeth, you’re a better person than I. If you can make it through the whole 21 minutes, you deserve a medal. (I did!)

How could it come to this in America: Sarah Palin is regarded as not only a celebrity, but as someone whose endorsement is worth having? DO NOT MISS her loud claim that Trump will “KICK ISIS’S ASS!” at 5:46, and her misuse of the word “largesse” as a perjorative at 15:48.

Where’s Tina Fey when we need her? Just the sight of Palin and Trump standing side-by-side on a platform, with Trump grinning like a fool and nodding like a bobblehead figure as Palin praises him, is an embarrassment to our country. 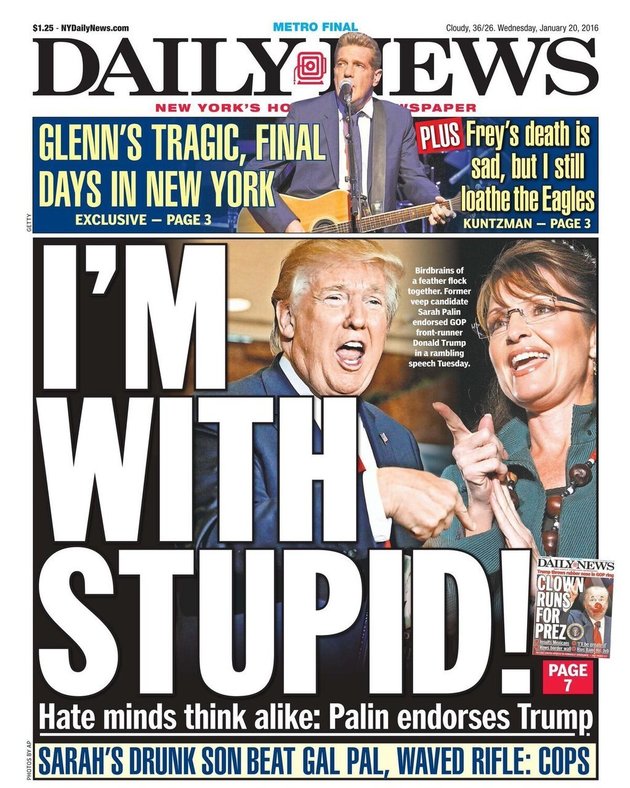