Over at Philosopher’s Magazine (PM) online, Massimo Pigliucci takes it upon himself to review Russell Blackford’s review of my book Faith versus Fact—without in fact having read my book itself (his review is called “In defense of accommodationism: on the proper relationship between science and religion”).  Now I’ve done something like that before, but I’ve tried to avoid criticizing an unread book as opposed to what its review says. Massimo doesn’t seem to have limited himself to that bailiwick. Regardless, Russell is going to respond in the pages of PM, so I will be brief, addressing only a few of Massimo’s comments.

Here’s how I see his main points, which, in sum, largely coincide with Steve Gould’s “non-overlapping magistria” (NOMA) view of the “proper” relationship between science and religion. Religion is supposedly about ethics and meaning, and science about facts and hypotheses. And that difference, said Gould, makes their ambits non-overlapping, so they can live happily ever after—even helping each other. Massimo apparently agrees (his quotes, and those of others, are indented below):

Religion isn’t about believing in facts about the cosmos, but about meaning, morals, and values. That’s exactly what Gould said. Pigliucci (my emphasis):

. . . it is simply a gross misreading of the history and meaning of religious practices to claim that their main business is, or even has been, the production of cosmogonies. Sure, the Old Testament talks about the origin of humanity in terms of Adam and Eve, while Hindu texts tell us that the world is cyclically created and destroyed every 8.64 billion years. But so what?

. . . Religions, and religious belief, however, are primarily not about cosmogonies, but rather about ethical teachings and questions of meaning. Whether those ethical teachings are sound, or the answers provided to the issue of meaning satisfying, needs to be assessed depending on the specifics. But such assessment is a matter of philosophical discourse, and perhaps of human psychology, certainly not of natural science.

. . . My mother, for one, was rather scientifically illiterate, and she considered herself a Catholic. But she absolutely did not believe in either Adam and Eve or that the world was created in seven days. She thought, like any sensible modern person does, that religious stories are best interpreted as allegories, not as literal truths.

Well, 42% of Americans are biblical creationists alone, and another 31% accept evolution, but a form of evolution guided by God. Many of these people try to insert creationism into the school science curriculum. If scripture is just an allegory for most “sensible modern people,” then a lot of modern people aren’t sensible. And if they don’t believe the allegories, why do they fight so hard to get them taught in public schools?

Further, here are the results of a 2013 Harris poll on what Americans believe. Allegories my tuchus! 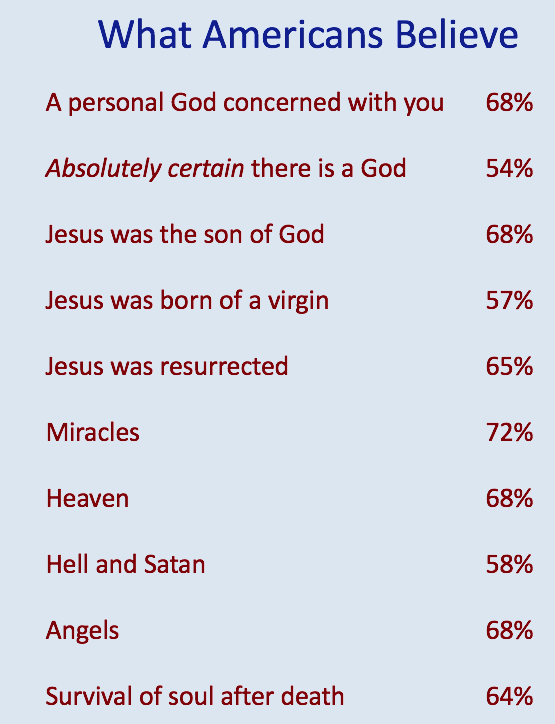 Are those metaphorical angels? And are Hell and Heaven and the afterlife just metaphors? How can “survival of soul after death” even be a metaphor?

I give more data in Faith versus Fact, since an important part of the book is my claim that at bottom many religionists base their faith on beliefs about reality. One “non-negotiable” of Christians is given just below. Sadly, Massimo hasn’t read the book. (Well, maybe not “sadly”: for if and when he does, I’m not expecting plaudits, since he seems to see himself as the inerrant arbiter of proper religion, philosophy and science. Indeed, he often sounds as if he’s speaking ex cathedra.)

Further, if most modern people think that all of scripture—and note that Pigliucci isn’t excluding Islam here—is allegorical, what about the Jesus story? That, after all, is the foundational story for most Christians: Jesus was the son of God (and God Himself, too), died for whatever “sins” we are born with, was crucified, resurrected, and is the locus of our belief if we want to go to Heaven. Is THAT an allegory? If so, are those who take it literally not “sensible”? Or does Pigliucci define “sensible” as “those who see religious stories as allegories,” making the whole thing tautological?

And, Massimo, go tell your “allegory” theory to Muslims. In fact, I dare you to propound it on the steps of the Prophet’s Mosque in Medina, and see if all the “sensible” Muslims suffer you to live. As the 2013 Pew poll showed, the vast majority of the world’s Muslims who were surveyed see the Qur’an as literally true, not an allegory, and think there’s only one way to interpret the book.

And here are more data showing that Muslims have factual, non-allegorical beliefs (the Middle East wasn’t surveyed, probably out of fear, but you can bet there at least as literalistic as the Muslims below): 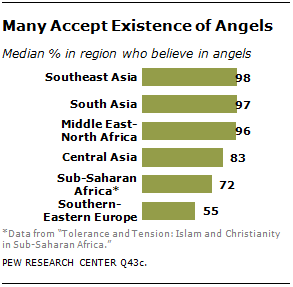 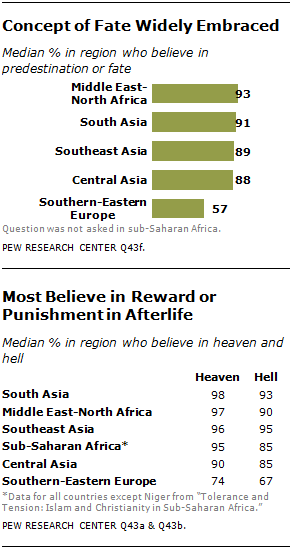 Finally, as I show in the book, many theologians (including liberal ones) reject the NOMA solution precisely on the grounds that religion is about more than “meanings, morals, and values.” It’s also about facts. Here are a few quotes that I gave in the book or use in my talks:

But the religion [Gould] is making room for is empty of any claims to historical or scientific fact, doctrinal authority, and supernatural experience. Such a religion, whatever be its attractions to the liberal scientific mind, could never be Christianity or, for that matter, Judaism or Islam.
—Ian Hutchinson (Christian physicist at MIT)

“I cannot regard theology as merely concerned with a collection of stories which motivate an attitude toward life. It must have its anchorage in the way things actually are, and the way they happen.”
—John Polkinghorne (trained physicist, now Anglican priest)

A religious tradition is indeed a way of life and not a set of abstract ideas. But a way of life presupposes beliefs about the nature of reality and cannot be sustained if those beliefs are no longer credible.
—Ian Barbour (scholar, now deceased, who was the Big Expert on the relationship between science and religion)

Likewise, religion in almost all of its manifestations is more than just a collection of value judgments and moral directives. Religion often makes claims about ‘the way things are.’
—Karl Giberson & Francis Collins (evangelical Christian physicist and geneticist respectively)

. . . Here is a second highly indicative quote from Blackford: “Coyne makes clear that he is not talking about a strict logical inconsistency. Rather, incompatibility arises from the radically different methods used by science and religion to seek knowledge and assess truth claims.”

Ah, so it turns out that science and religion are, in fact, logically compatible (not sure why the clause “strict” is necessary here, something either is or is not logically consistent with something else). I could declare victory and graciously leave the room at this point, but I’m not done yet.

I explain in the book that yes, there’s no logical incompatibility between science and religion, but that there’s profound incompatibility in practice between science and religion, involving philosophy, methodology, and outcome of their searches for “truth”. Given that Massimo hasn’t read my book, I’m not sure why he’s declaring victory here. However, the man always sees intellectual discourse as a Manichean battle between light (Massimo) and dark (everyone else), and a battle he has to win.

Ah, spoken ex cathedra! Has Massimo done a survey? I don’t think so. He’s simply defined “accommodationist” in a way that tautologically excludes many religious people. But an accommodationist to me and most people is simply someone who thinks that science and religion are compatible, and that includes science-friendly religious people like John Haught, Owen Gingerich, and the five people quoted above, none of them atheists. And it is their arguments I take on in the book.

I could go on, but I’m tired, and at this point I’ll throw the ball to Dr. Blackford and let him finish the job.

One more point: what clearly burns Pigliucci’s onions most is my notion of “science broadly construed”: the application of the principles of reason, empirical examination, replication, and so on, which can be used by historians, car mechanics, archaeologists, and so on. Pigliucci really hates this because he sees himself as the Demarcator of Science, and to him “science broadly construed” is not science. Indeed, I even get accused of the dreaded sin of Scientism!

To refer to the application of basic reasoning and empirical trial and error as “science” is anachronistic, and clearly done in the service of what I cannot but think is a scientistic agenda.

Well, I don’t much care, because the incompatibility that I really emphasize in the book is the one in its title: faith versus fact. Or, if you will, science versus superstition. If you want to deny that “fact” is “science broadly construed,” that’s fine, but in the end it’s a semantic issue.