It was a year ago today that the world finally became aware of the dangers involved in satirizing and criticizing Islam. The Danish cartoon issue in 2005, with its attendant riots in Muslim lands, and the 2004 murder of Theo van Gogh for making the film “Submission“, should have already told us that, but the real wake-up call was the slaughter of 12 people at the Charlie Hebdo offices on January 7, 2015. Yet people are still claiming that the magazine brought the attack on itself. Today another man was killed after assaulting a police station in Paris, reportedly shouting “Allahu akbar.”

This morning the Jesus and Mo artist put up the following cartoon, called “restons,” described in the email as “a placeholder until next Wednesday.”

The translation: “We remain Charlie Hebdo.” It’s surely based on the slogan “Je suis Charlie Hebdo” (“I am Charlie Hebdo”), but I’m not quite sure why Jesus and Mo themselves are holding the sign. 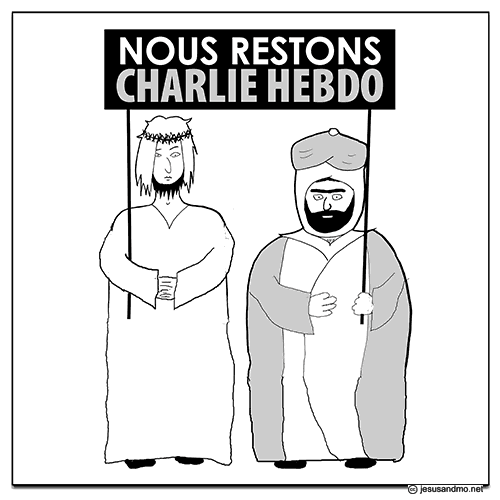