Given that gun control is largely in the hands of a Republican Congress subservient to the National Rifle Association, and adjudicated by an intensely conservative Supreme Court, there’s very little President Obama can do to stem the tsunami of pistols, assault weapons, and open-carry laws inundating the U.S. But he did what he could yesterday. Undoubtedly advised by the Justice Department, he issued an executive order mandating the following:

These are, as Obama admitted, baby steps but it’s the best he can do given that there are two other gun-loving branches of government. Remember, too, that 90% of Americans support universal background checks for gun buyers, and yet the Republicans and the NRA oppose this. They are thus opposing the will of the people in their odious attempt to enforce a misconstrued Second Amendment.

Several times during his talk Obama teared up, especially when remembering the children who’ve been killed in mass shootings. Here’s one instance of his emotionality:

Who can doubt that Obama’s emotion is real? This is, after all, a man who teared up during Aretha Franklin’s performance of “Natural Woman” at last year’s Kennedy Honors!

Who can doubt that? The goddam NRA and Republicans, that’s who. First, the NRA issued a reprehensible statement (quoted in the New York Times):

The National Rifle Association, targeted by Mr. Obama in his speech, mocked his tears.

Condescending? Seriously? Didn’t sound like it to me. But emotional? Yes, of course, for every gun death leaves behind a wake of distraught friends, lovers, and relatives. Are we not supposed to be passionate about saving the lives of the innocent?

But it gets worse. On a talk show, Fox News hosts Andrea Tantaros, Melissa Francis, and Meghan McCain made fun of Obama’s tears, with Tantaros saying that they “should check the podium for a raw onion” and McCain adding that the weeping “didn’t seem horribly authentic”. How dare they? Have they no sense of decency, at long last? They may dislike Obama’s policies, but it’s lower than a snake’s belly to question whether he was sincere:

MediaMatters reports other mocking reactions of conservatives, including tw**ts by John Nolte and Ben Shapiro of Breitbart and Charles C. W. Cooke of The National Review: 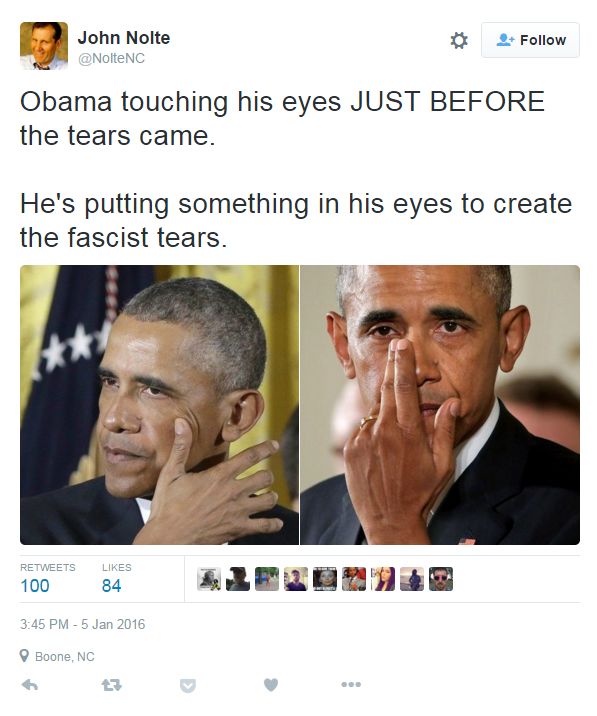 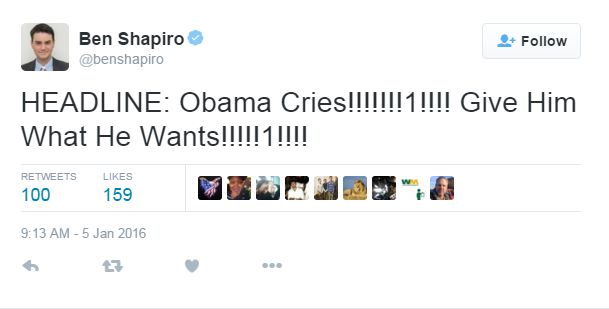 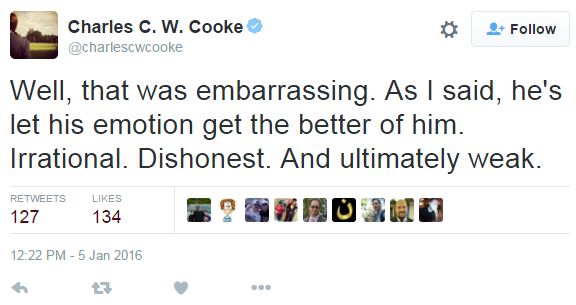 But forget Obama’s tears. Even assume that he surreptitiously applied Ben-Gay ointment to induce them, as Nolte suggested in a later tw**t. Just remember the tears that were real: those of the parents of the children killed in all those school shootings, those of the friends, spouses, and relatives of the 14 people killed in San Bernardino, and the tears of others left alive when thousands of people they knew and loved died in unnecessary gun violence.

According to the NRA and the Republicans, though, that violence is really necessary—an unfortunate but inevitable byproduct of our pressing need to defend ourselves. But that’s bogus, for, as Obama said, America has far more gun violence than countries with stricter gun control: 30 times that of the UK, for instance. (And in the US in 2012, 90% of murders were by guns, compared to only 10% in the UK). When countries like the UK and Australia get serious about guns, homicides and accidental shootings drop.

I have to restrain myself here to avoid cursing at Republicans and the NRA for their callousness and love of shooting. All I can say is that if 90% of Americans want background checks, why won’t Congress allow it? And that’s only the first step toward doing what we should do: implement the kind of stringent controls on firearms that other First World countries have.

226 thoughts on “Obama issues executive order mandating some gun control, attacked by Republicans and NRA for his emotionality”