Maajid Nawaz, a moderate Muslim, has been vilified by both Muslims and leftists for his efforts to harmonize Islam and Western values, and especially for engaging in both written and spoken dialogue with Sam Harris. For these acts, as I noted a while back, Nawaz has been called a “lapdog,” a “porch monkey,” and a “native informant.” All these are simply updated synonyms for “Uncle Tom.” Yet Nawaz was once a militant Islamist, jailed in Egypt for five years for organizing radical movements.  Since then he’s become de-radicalized and has founded Quilliam, a think tank devoted to reinforcing moderate brands of Islam and to opposing religious extremism. And by his own account he’s still a believer.

Many of us believe that if Islam is to truly reform, purging itself of its violent and extremist elements, that change will have to come from inside—from Islamic moderates. In other words, from people like Nawaz.

But I’m beginning to wonder if that will work. For Nawaz, who should be the poster boy for effecting this kind of change, is regularly vilified by both Muslims and Westerners. The former hate him for being too moderate, and he’s attacked from both sides for supposedly being a lackey of the colonialist West. He can’t win, and, as far as I know, receives constant death threats and requires protection.

Yet who is better placed to be a spokesman for “moderate Islam”? The man has seen radical Islam from the inside, and gave it up. Nobody can accuse him of not knowing what he’s talking about.

Here’s an example of what he now faces. In Islam,  du’a is a prayer-like gesture, a submission and supplication to Allah for fulfillment of a need. So Nawaz’s fellow Muslims simply established a Twi**er site,  #duaagainstmaajidnawaz, collecting du’as for Allah to bring down all kinds of violence on their moderate coreligionist. Here are a few tw**ts from that site reproduced at Harry’s Place. It’s this kind of stuff that makes Nawaz fear for his life: 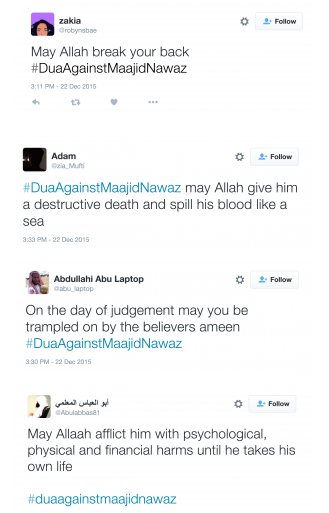 But there’s good news, too. People defending Nawaz have hijacked that thread (go look at the latest ones), posting hilarious and satirical supplications that have nothing to do with Islam.  The pushback has diluted the real threats to homeopathic proportions. Here are a few folks who have gone to bat for Nawaz: 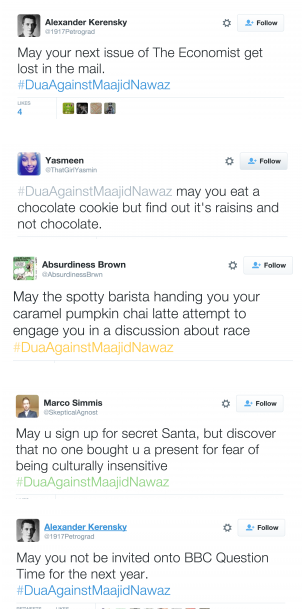 I have to say that the discovery that a cookie contains raisins rather than chocolate chips seriously distresses me.

Here are a few others from BuzzBry:

May your USB cable be inserted upside down 80% of the time…And may your shopping cart have one confused wheel. #DuaAgainstMaajidNawaz

May your dvd player slightly scratch your copy of Mary Poppins, making it skip slightly during the good songs. #duaagainstmaajidnawaz

@MaajidNawaz May Donald Trump speak very highly of you at his next campaign rally. #duaagainstmaajidnawaz

I’m always amazed at the hidden comedic talents revealed by the Internet, in this case directed at Muslims attacking Nawaz for his laudable acts.

Sarcasm may have derailed that Twi**er site, but the problem remains: if moderate Muslims like Nawaz reap vilification from their coreligionists, and if Islam’s pacification requires those very moderates, how will any change occur? Every moderate Muslim or ex-Muslim I know publicly trying to effect that change has been subject to threats of violence and death.

And of course many of us worry that truly moderate Muslims will remain silent lest they suffer the same fate as Nawaz. If Western newspapers are so fearful of retribution that they won’t reprint Danish cartoons satirizing Islam, how can we expect Muslims to take even more dangerous stands? Nawaz is a very brave man, and I revile those who  label him a Muslim Uncle Tom.

Here’s an example of the kind of stuff that brings him opprobrium: an unveiling of the anti-Enlightenment sentiments of Muslims who would prefer to keep them under wraps. Contributor Grania sent me a link to the video below, commenting, “This is fricking hilarious (in an unfunny way): watch Muslims weasel out of answering whether gays and women can morally be stoned to death.”  Maajid Nawaz is the interlocutor, and he doesn’t let up. I may have posted the video before, but it’s worth watching again given the flak that Nawaz is taking from both sides:

Ten years ago 40% of British Muslims favored sharia law being introduced in parts of their country (only 41% opposed it) , and even some Anglican clerics, most notably the last Archbishop of Canterbury, have said that some elements of sharia should be incorporated into British law. That’s the mindset that Nawaz is fighting against, and as yet I see little success. It’s like fighting creationism in the U.S.: just as you can’t convince many conservative Christians that evolution is compatible with their faith, so you can’t convince many conservative Muslims that democratic, nonreligious law is compatible with Islam.

121 thoughts on “A hail of hatred falls on moderate Muslim Maajid Nawaz, Internet fights back with humor”