The Big News this morning is that Pope Francis has, miraculously, come across another miracle performed by Mother Teresa—or rather by her spirit. This gives her the second miracle she needs to go beyond beatification to full canonization, becoming Saint Teresa. The Vatican clearly put the old fraud on the fast-track to sainthood ever since she died, and now they get their chance. In the old days, it took decades or centuries from candidacy to canonization, but now, trying to court popular sentiment, the Vatican has accelerated the process.

But remember that even Mother Teresa’s first miracle was totally bogus. As I wrote in Faith Versus Fact:

The Vatican itself, which requires a miracle to beatify someone, and two miracles to make them a saint, is none too scrupulous about the medical evidence needed to elevate someone to the pantheon. The beatification of Mother Teresa, for instance, was the supposed disappearance of ovarian cancer in Monica Besra, an Indian woman who reported she was cured after looking at a picture of the nun. It turns out, though, that her tumor wasn’t cancerous but tubercular, and, more important, she’d received conventional medical treatment in a hospital, with her doctor (who wasn’t interviewed by the Vatican) taking credit for the cure.

(See also the objections of Indian rationalists to this “evidence.”)

Now, just in time for Christmas, the Pope has recognized a second miracle. The BBC reports:

Pope Francis has recognised a second miracle attributed to Mother Teresa, clearing the way for the Roman Catholic nun to be made a saint next year.

The miracle involved the healing of a Brazilian man with several brain tumours in 2008, the Vatican said.

Mother Teresa died in 1997 and was beatified – the first step towards sainthood – in 2003.

. . . “The Holy Father has authorised the Congregation for the Causes of Saints to proclaim the decree concerning the miracle attributed to the intercession of blessed Mother Teresa,” the Vatican said on Friday.

She is expected to be canonised in Rome in September.

. . . There are few details about the recovery of the Brazilian man, whose life the Vatican says was saved in the second miracle.

His identity has not been disclosed to maintain the discretion needed for the investigation, the Catholic New Agency has said.

It says he was unexpectedly cured from brain tumours in 2008 after his priest prayed for Mother Teresa’s intervention with God.

Well, before Agnes Bojaxhiu can be elevated to the Heavenly Pantheon, she has to be vetted, including examination by the genuine “Devil’s Advocate,” who militates against making her a saint. It was Christopher Hitchens who did that when Bojaxhiu was up for beatification, as described in this article.

But the procedure is not an objective examination of the miracles and saint-worthiness of Mother Teresa; it’s a pure put-up job. We can see that because the Vatican already says she’ll be a saint within a year. I wouldn’t bet against that!

The Church is none too scrupulous about these “miracles,” of course. They decide in advance that someone will become a saint, like the popular John Paul II, and then, if you look hard enough, you’ll find people willing to come forward to provide the requisite two “miracles.” It’s not even close to an objective, scientific procedure.

Even if there were no natural explanation for these “miracles,” usually involving the disappearance of a disease, isn’t it odd that those diseases happen to be the ones that can show spontaneous remission anyway? Nobody gets canonized for helping legs or eyes grow back. And in the case of Mother Teresa’s first miracle, the “remission” occurred after medical treatment, and the disease was misdiagnosed anyway.

Catholics should be ashamed of themselves for buying into this bogus vetting of saints. For, after all, this is not just an earthly honor, for sainthood is not supposed to be bestowed on an individual by the Church, but recognized as a special sign of holiness and God’s favor. And once you’re a saint, you have special access to God, and therefore praying to saints gives one a hotline to the divine.

What a foolish idea, and one made more foolish by the purely subjective decision that it takes at least two miracles to confer—excuse me, recognize—sainthood, and by the arbitrary and tendentious way these miracles are recognized. 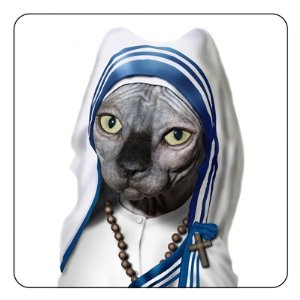 43 thoughts on “Mother Teresa gets her second miracle, now on the fast track to sainthood”