Reader Steve U sent me this report from the BBC about a cat pub, along with this note:

Luke Daniels runs The Bag of Nails in Bristol, South-West England. The pub has plenty of beer and ale to choose from, and 15 cats.

According to the BBC report, visitors love it (my emphasis):

Bethan Ingram has journeyed 60 miles from her home in Cowbridge, south Wales, to visit the Bag of Nails pub in Bristol.

Attracted by publicity about its unlikely status as a “cat pub”, the moggie-mad 24-year-old is here for a day out – and has not been disappointed.

“It’s my day off and I really love cats and wanted to see the pub,” she smiled, as two kittens wrestled on the bar.

Apparently cats are legal in British pubs, but d*gs are, properly not allowed in The Bag of Nails! 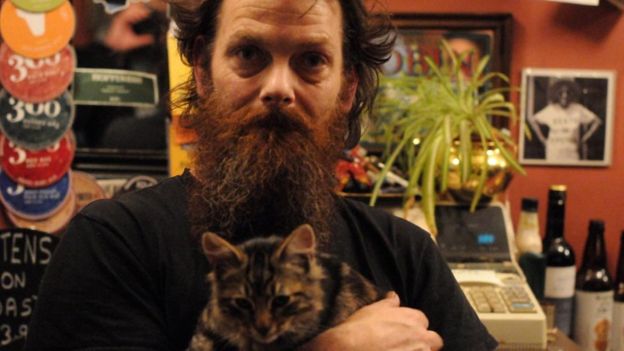 However, it’s the pub’s 15 cats that are proving to be the big draw. And if that number seems a little high, there used to be as many as 24 roaming about the bar.

“We had a lot of cats when I was young and I thought it was the best thing ever. But recently it got a bit out of hand,” Luke laughed. “So we gave some away.”

The cats that are left variously go by names such as Salvador, Absinthe, Pompidou and Caligula, and “apart from the odd, external influence” are all descended from Malcolm, a British short-haired male silver tabby, and solid black female Beresford, named after a former landlord. 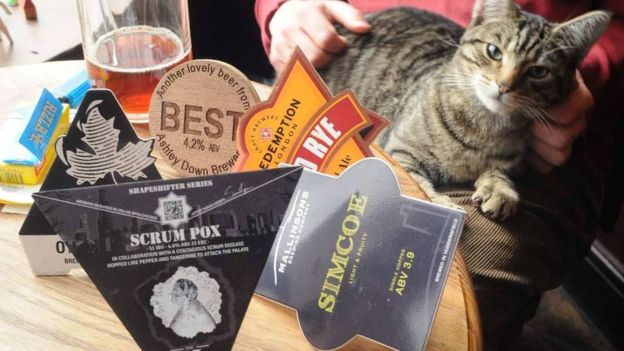 As the landlord of an independently-run free house, Luke says he has “no brewery and no boss” and the city council are fine with the way he manages it “so long as the rent is paid”.

And he said a recent inspection by environmental health inspectors earned a five-star rating, mainly because no food is cooked on the premises.

Even though the pub’s various cats slink past the pints of drinkers at the bar, there is a distinct lack of beer spillage.

Luke said: “Cats are very elegant in the way they walk. Very occasionally drinks have been knocked over, but it’s just not an issue.”

A free house! If they carry Landlord, I’m going to take up residence. 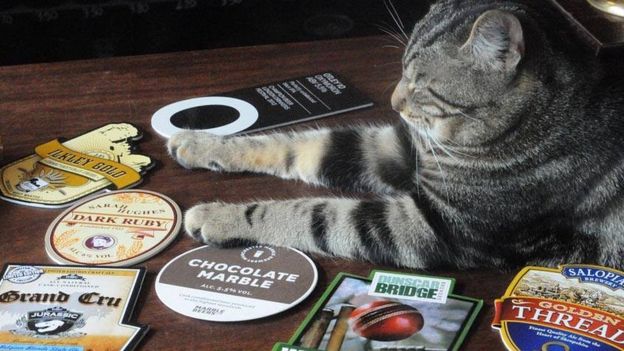 Regarding the viral concept of cat cafes, the publican said this;

Luke nearly coughed up a hairball as he described the concept as “deeply flawed”.

“It’s treating cats as a commodity and they are not. They are individual creatures with minds of their own,” he said.

“I know the media has portrayed us as a ‘cat pub’, but we just happen to have a lot of cats living upstairs that like to come down into the bar from time to time. There’s a big difference.”

In the meantime, Luke said he would continue welcoming the spate of new punters any media coverage attracts. 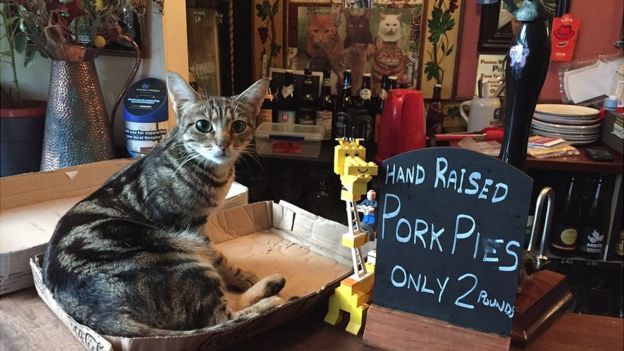 The first reader who gets themselves photographed in The Bag of Nails, along with one of the cats and a pint, will get an autographed copy of WEIT with a cat (drinking a pint) drawn in it.

Regarding cats and alcohol, we have a report from DNAinfo of a cat guarding a local Chicago microbrewery, guarding the grain from rats.

Rodents are attracted to the extremely high-quality grain that breweries stock by the truckload. To the rats, it’s like a “giant block of cheese,” Hurley said.

Empirical hired an exterminator to pay regular visits to the brewery, but still found itself throwing money out the window in the form of gnawed-on bags of barley.

Enter Tree House, which has moved 264 feral cats within Chicago and 130 in the suburbs, according to Jenny Schlueter, manager of Cats at Work. 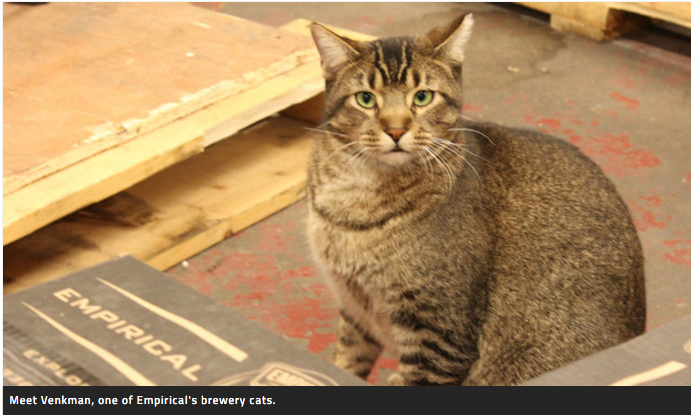 She’s placed cats in factories, barns, a hotel loading dock, behind restaurants and in backyards across the city.

“Rats can smell their predators,” Schlueter explained. “Quite honestly, house cats will also keep rodents away.”

Smart rats move along, she noted, and the “ones that don’t get it” wind up being hunted. While some folks become squeamish at the thought of cats hunting rats, Schlueter said she finds it more humane than poison or traps — and not to mention it’s part of the natural circle of life.

Here’s where the brewery cats live:

A warehouse like Empirical’s is ideal for feral cats — kind of like a real indoor home but not so confining that it stresses the cats out, Schlueter said.

Noting that Tree House has struggled to convince men that cuddling up to kittens can still come across as macho, Schlueter is pleased with the way Empirical has embraced its colony.

“We’re so grateful to them,” she said. “They’re good role models for guys.”

Well, I’ll ignore that sexist remark, and simply refer you to an Instagram site that’s collected pictures of cats working in distilleries, breweries, pubs, and wine bars throughout the world. Lots of nice photos there, and here’s one from the Cork State 11 distillery in Clavernack, New York: 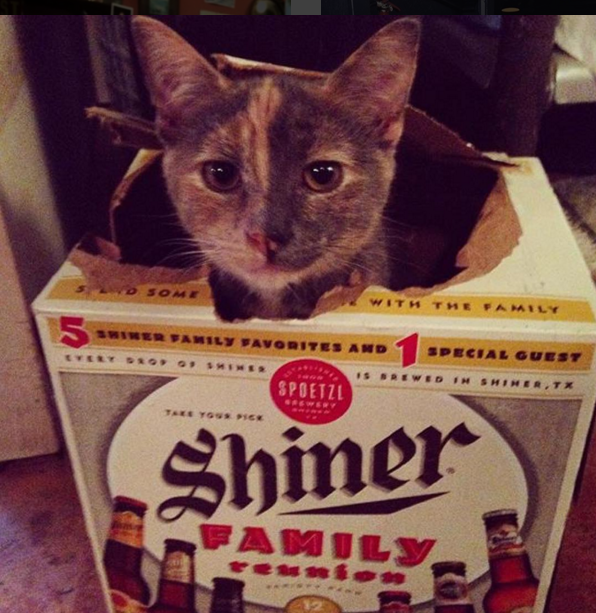 Finally, because I feel like a teenager today, I present you with a nice tee-shirt and the results you get when you wear it:

I didn’t realize for a while that that’s a real kitten in the bottom photo. I’ll have to try wearing that shirt. . .