I can’t help going after Ben Carson; I suppose it’s a combination of his ignorance, his repeated and stupid attacks on evolution, and the fact that right now he’s the Republican front-runner. Readers have speculated that Carson really knows better about evolution, and he’s just lying for Jesus and his constituency, but I’m not so sure. After all, the human mind, particularly when marinated in faith, is eminently capable of deceiving itself.

Now, however, Carson has been caught in more gaffes and at least two lies. Will this hurt him? I doubt it: to Republicans, who have a seemingly infinite tolerance for incompetence and dissimulation, he’s golden.

First, as the Washington Post reports, Carson shows a profound ignorance (deliberate or otherwise) of American history. Here’s part of a Facebook post he put up on Wednesday. 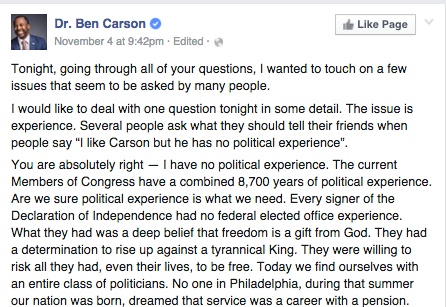 The second gaffe, or rather lie, wasn’t taken up by the Post—Carson’s statement about the signers that “What they had was a deep belief that freedom is a gift from God. They had a determination to rise up against a tyrannical King.” That’s also bogus. Although the Declaration does state this—

“We hold these truths to be self-evident, that all men are created equal, that they are endowed by their Creator with certain unalienable Rights, that among these are Life, Liberty and the pursuit of Happiness.–That to secure these rights, Governments are instituted among Men, deriving their just powers from the consent of the governed.”

—everyone knows that people like Franklin, Adams, and Jefferson, were either atheists, agnostics, or at best deists, and their belief in creating a country based on freedom came from the Enlightenment, not from God. Indeed, the U.S. Constitution—the actual underpinning of our government drafted in 1787—doesn’t mention God once. Note, too, that even in the statement above, governments are said to obtain their powers from the “consent of the governed.” That doesn’t mean “from the consent of God,” but from the people.

The most famous Founders, including George Washington, could hardly be said to have been religious, and at any rate what religion they did believe they kept to themselves, unlike every Republican candidate. I suspect that people like Jefferson, Franklin, and Washington didn’t believe in any of the tenets of Christianity—save, perhaps, in a deistic God. I’m pretty sure Franklin was an outright atheist, but of course you couldn’t admit such things back then.

And now to the lies. Carson has now been caught embroidering his resume. Here he is on Charlie Rose this October, saying what Carson’s been saying for years—he was offered a full scholarship to West Point:

As I said, this isn’t the first time he’s said that, as Politico (which broke the story) noted:

Ben Carson has repeatedly claimed he was offered a full scholarship from West Point. He conveys the story in at least two other books, “You Have a Brain” and “Take the Risk.” Carson repeated his West Point claim as recently as Aug. 13, when he fielded questions from supporters on Facebook.

And in October, Carson shared the story with Charlie Rose: “I had a goal of achieving the office of city executive officer [in JROTC]. Well, no one had ever done that in that amount of time … Long story short, it worked, I did it. I was offered full scholarship to West Point, got to meet General Westmoreland, go to Congressional Medal dinners, but decided really my pathway would be medicine.”

Anybody who’s acquainted with the U.S. military academies, including the Naval Academy and West Point, knows that there are no “full scholarships”: you apply, need a nomination from your congressman (or a few other sources), and then become part of a rigorous selection process, with the vast majority of candidates failing to secure a spot. (I was once urged to go to West Point by my father, an Army officer, and did investigate the process.) If you do get in, your tuition and all expenses are free. As Greg Mayer (who sent me the link) told me—and he has a daughter who went to the Naval Academy—”Anyone with even a nodding acquaintance with the US military academies knows that there is no tuition for any cadet/midshipman. Not only is he lying, it’s a lie that couldn’t possibly be true.”

One more “embroidery”: the part about meeting General Westmoreland appears to be false as well. As the Detroit News reports:

Republican presidential candidate Ben Carson’s published account of having dinner with a top commander in the Vietnam War after marching in a Memorial Day parade in 1969 as a high school ROTC cadet in Detroit does not match historical records.

In Carson’s 1990 best-selling autobiography, “Gifted Hands: The Ben Carson Story,” the neurosurgeon tells of being offered a scholarship to West Point as a high school senior sometime after having dinner with the U.S. Army’s chief of staff, Gen. William Westmoreland, on Memorial Day 1969.

But Westmoreland’s personal schedule shows the general was not in Detroit on Memorial Day or during the days preceding and following the holiday. His schedule says he was in and around Washington, D.C., that weekend, according to Army archives The Detroit News reviewed Friday.

As with the West Point gaffe, Carson’s campaign is doing damage control, and Carson is even blaming the media for scrutinizing him more closely than it scrutinized Obama. It’s said to be a “media witch hunt,” something Republicans will increasingly maintain because they hate the media, which they see as a bastion of liberal politics.

But wait—there’s more! Carson has made a big deal of his supposedly violent past, but none of those incidents can be verified by the press, either. As CNN reports (see the video on that CNN page as well):

In his 1990 autobiography, “Gifted Hands: The Ben Carson Story,” Carson describes those acts as flowing from an uncontrollable “pathological temper.” The violent episodes he has detailed in his book, in public statements and in interviews, include punching a classmate in the face with his hand wrapped around a lock, leaving a bloody three-inch gash in the boy’s forehead; attempting to attack his own mother with a hammer following an argument over clothes; hurling a large rock at a boy, which broke the youth’s glasses and smashed his nose; and, finally, thrusting a knife at the belly of his friend with such force that the blade snapped when it luckily struck a belt buckle covered by the boy’s clothes.

“I was trying to kill somebody,” Carson said, describing the incident — which he has said occurred at age 14 in ninth grade — during a September forum at the Commonwealth Club in San Francisco.

But nine friends, classmates and neighbors who grew up with Carson told CNN they have no memory of the anger or violence the candidate has described.

Gerald Ware, a classmate at Southwestern High School said he was “shocked” to read about the violence in Carson’s book.

“I don’t know nothing about that,” said Ware, who still lives in southwestern Detroit. “It would have been all over the whole school.”

CNN was unable to independently confirm any of the incidents, which Carson said occurred when he was a juvenile.

The reason this “violence” narrative is important is because Carson used it to show how his life was changed by God. After a particularly violent episode in which he tried to kill someone, he wrote, Carson went into the bathroom of his Detroit home and picked up a Bible. Turning to a passage in Proverbs—an experience comparable to Francis Collins seeing his frozen waterfall—Carson’s life was suddenly transformed, he came to God, and was instantly turned into the mild-mannered and anodyne person he is today.

That’s a good story, and plays into the Republican penchant for religion, but it doesn’t seem to be true.

Last year, NBC News anchor Brian Williams was caught fabricating stories, and putting them on the air, about his role in the Iraq war. For that he was fired. Newspeople, everyone said, have a special responsibility to tell the truth.

Why should we expect anything less from Presidential candidates? 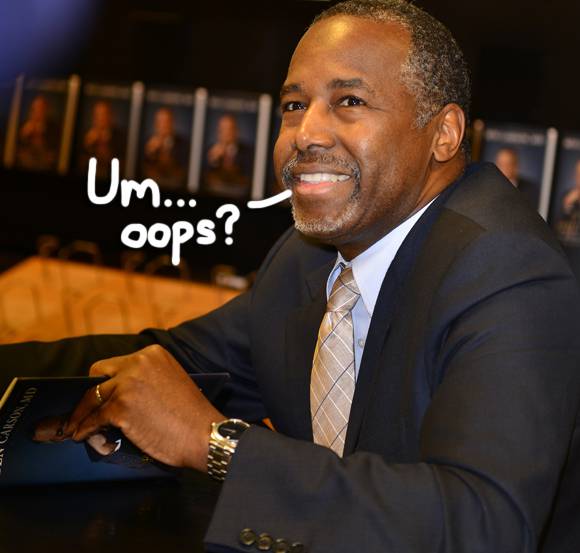