This Kickstarter project, which I wrote about in August, intends to PROVE that God exists by showing that evolution is bogus. Back then it had $0 in contributions. Well, they’ve gone up a bit, and the project expires about 4 p.m. Chicago time. Here’s a precis of the goals:

In order to prove God exists we have to eliminate the idea that evolution is all-encompassing. I believe in evolution on a small scale. We see evolution from a maggot to a fly. However, to say that humans came from a single cell organism is a bit far fetched. I believe the populist has accepted the idea of evolution due to the lack of evidence of the contrary. Currently evolution is being taught in public schools as a fact, and new generations do not accept intelligent design.

I am graduating with my Maters degree in psychology and entering into my Doctorial program at Arizona State University. I plan to concentrate in Evolutionary Psychology and Child Psychology. I am currently working on my Doctorial thesis that will follow Charles Darwin’s journey to the Galapagos Islands. By following the steps and research of Darwin my researchers and I can detail the evidence and experiments that Darwin used for his Theory of Evolution. By following in Darwin’s footsteps, I hope to prove that evolution is confined into stages. Each stage will allow evolution to occur but is limited to a self-sustaining longitudinal circle. Publishing this theory with a documentary film and publications, we can eliminate the over all idea that evolution is all-encompassing. The above idea is step one of a multi step plan to change the view of evolution by proving that certain aspects could not have evolved without being created by an intelligent design. I am not out to promote a region or way of life. I just believe there has got to be a better answer than all in compassing evolution. Thank you for reading this.

Goal: Document and film the work of Charles Darwin to discover evidence of intelligent design. In order to prove intelligent design we must debunk the idea that evolution is all encompassing (from single cell to human).

I won’t highlight the misspellings and grammatical infelicities (the person can’t even spell his thesis). And I wonder how Christian Klingeler got into ASU’s doctoral program. Anyway, here’s the take from the $75,000 requested. Someone’s played a hilarious joke with the donation: 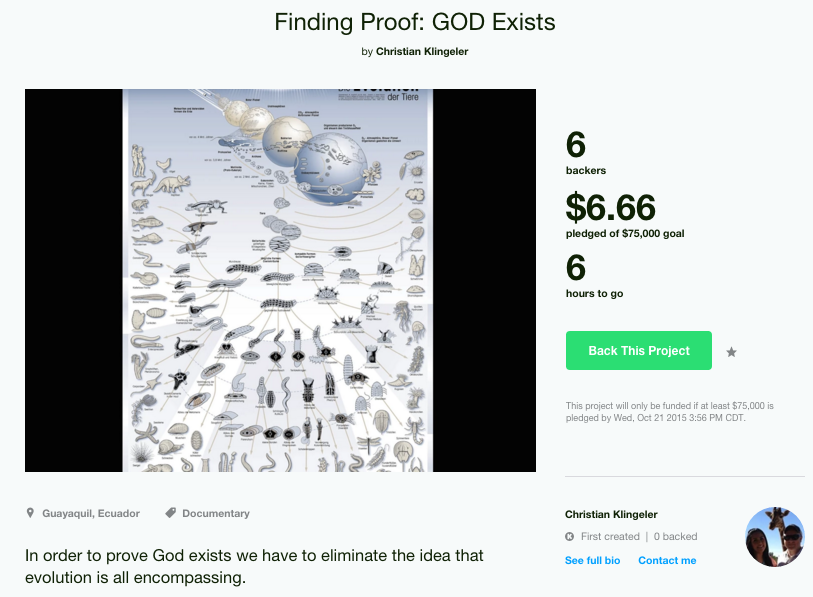 79 thoughts on ““Proof of God” Kickstarter about to expire, with a pitiful and hilarious take”