I’m exhausted from writing about science, so don’t expect much substantive stuff for the rest of the day. But here’s a bit of popular science, or rather unpopular science: a lovely Kickstarter Project by a creationist, one Christian Klingeler. Klingeler is apparently studying evolutionary psychology at a good university but is also a creationist who accepts a “multi-stage” creation, with evolution occurring within stages but each “stage” created by God.

He’s now e-begging for seventy-five thousand bucks to take six people to the Galápagos Islands to prove that Darwin was wrong and to prove as well that God exists! What kind of scientist sets out to prove what he intuits already? The proposal below is one of the baldest examples of confirmation bias I’ve ever seen.

Anyway, it’s pretty funny, as well as poorly written (my interpolations and commentary are in bold and enclosed in brackets):

In order to prove God exists we have to eliminate the idea that evolution is all-encompassing. I believe in evolution on a small scale. We see evolution from a maggot to a fly. [That is not evolution; it’s development!] However, to say that humans came from a single cell organism is a bit far fetched. I believe the populist [sic] has accepted the idea of evolution due to the lack of evidence of [sic] the contrary. Currently evolution is being taught in public schools as a fact, and new generations do not accept intelligent design. [According to his bio, Klingerer believes in intelligent design.]

I am graduating with my Maters [sic; or is he getting a degree from his mom?] degree in psychology and entering into my Doctorial [sic] program at Arizona State University. [ASU is a good school; how did this guy get in?] I plan to concentrate in Evolutionary Psychology [????] and Child Psychology. I am currently working on my Doctorial [sic] thesis that will follow Charles Darwin’s journey to the Galapagos Islands. By following the steps and research of Darwin my researchers and I can detail the evidence and experiments that Darwin used for his Theory of Evolution. By following in Darwin’s footsteps, I hope to prove  that evolution is confined into [sic] stages.[n.b. He’s not testing anything, he’s trying to show what he believes already. Who would pay for a religionist to do that? Oh—I forgot about Templeton.] Each stage will allow evolution to occur but is limited to a self-sustaining longitudinal circle. [What the hell is a “longitudinal circle”?] Publishing this theory with a documentary film and publications, we can eliminate the over all [sic] idea that evolution is all-encompassing. The above idea is step one of a multi step plan to change the view of evolution by proving that certain aspects could not have evolved without being created by an intelligent design. [How does he know that any designer would be God?] I am not out to promote a region [sic] or way of life. [Preceding sentence is a lie.] I just believe there has got to be a better answer than all in compassing [sic] evolution. Thank you for reading this.

Goal: Document and film the work of Charles Darwin to discover evidence of intelligent design. In order to prove intelligent design we must debunk the idea that evolution is all encompassing (from single cell to human).

Plan of Attack: My belief is evolution exists in individual self-sustaining circles. [???] By proposing this theory, with evidence from Darwin’s research we change the evolution flow chart from an all-inclusive chart to a multiple circles of self-sustaning [sic] life. By doing this the process of elimination will suggest the origin of each circle was conceived by intelligent design.

$1500 per passenger for tickets to Galapagos Islands

$1500 per passenger for tickets to Indonesian Islands to compare results [WHAT??? What is he looking for in Indonesia?]

$15000 for transportation around Galapagos Islands and other areas

$20000 for expense including: Hotel and equipment rental

$15000 for cost to complete film and release budget

$55000 Without filming crew or documentary 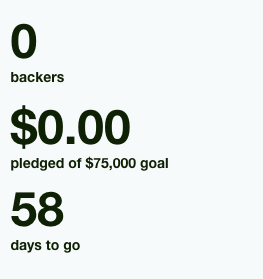 I doubt that he’ll get much more. Somehow I get the feeling this guy is just trying to fund a vacation in the Galápagos . . .

107 thoughts on “Kickstarter project: Creationists try to prove God exists by asking for money for a Galápagos trip”