It is both heartening and frightening that the two frontrunners for the Republican nomination are a hyper-religious creationist neurosurgeon and a loose-mouthed entrepreneur who has no real vision for the U.S. except self-promotion. It’s heartening because no matter how crazy this country is, I can’t imagine either Ben Carson or Donald Trump getting a majority of the vote. Still, it’s frightening to think that a lot of Americans think that either of these people would be a decent president.

I’ve written a lot already about Carson’s wacko creationism, but today let’s consider Trump and his barely veiled sexism. These two tw**ts are bad enough on top of his vile comments about Fox news anchor Megyn Kelly, but PuffHo gives more in “18 real things Donald Trump has actually said about women.” I can’t imagine why any woman would vote for him.

He deleted the comment below, but the damage was done, as it always is when you post inanities on the Internet. And it shows what Trump really thinks; it was deleted not because he thought better of what he said, but because he thought it politically damaging: 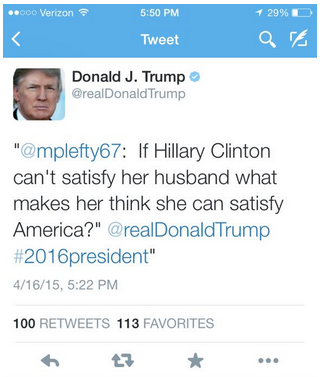