You may recall that there has been a ban on fox hunting in the UK for over ten years—since February, 2005, to be exact. As the Torygraph reports, there can still be “sham hunts”, in which dogs follow chemical trails and there is no killing, but the old ritual of “riding to hounds” remains as a largely covert and illegal activity—with the hapless fox torn to shreds by dogs. Matthew Cobb informs me, however, that fox-hunting is legal in a few circumstances:

You can still hunt with 2 dogs (I think thats the number) in England and Wales, and with larger packs in Scotland. Although the days of large packs have gone, they still drag hunt (ie follow a laid scent) and sometimes “accidentally” catch and destroy a fox. Tories have promised a vote on increasing the size of legal packs.

Damn Tories! How can they justify increasing the size of packs?

Regardless, how anyone can enjoy this “sport” eludes me, and the argument that it’s a country tradition (by patricians, of course) cuts no ice. Fox hunting is banned, and those who inflict such cruelty on wild animals should be fined and given a few days in the slammer. But the Torygraph’s piece, first published in February and then re-published in July, gives the gory details:

What is certain is that, far from dying out, the process of hunting has prospered, with some 45,000 people regularly taking part and 250,000 turning out across the country for the most recent Boxing Day meets. Officially these are “drag hunts”, where hounds follow a chemical trail laid across the countryside, or “trail hunts”, where the hunt’s path loops and overlaps to simulate unpredictable vulpine meanderings. Yet it would be wrong to say that hunting is now a bloodless sport, because – whisper it – some foxes are still pursued to their deaths.

There’s no way to know for certain how often this happens. If you ask Lee Moon, the answer is “all the time”. Moon is the spokesman for the Hunt Saboteurs’ Association (HSA), an umbrella body for 40 or 50 local groups who spend their winters chasing, tracking and disrupting hunts. Saboteurs, or “sabs”, spray oils on the ground to mislead the dogs, crack whips to deter them, and blow hunting horns to confuse them.

. . . Moon, who has been sabbing since the late 1990s, and whose groups have attended thousands of hunts since then, believes many prominent hunts routinely break the law. “They do exactly now what they used to do before the Hunting Act,” he says. “Some of it changes slightly when we or the police are there, but we believe that when there’s no one watching them – and often when we are there – they continue to hunt illegally.”

Paul Tillsley, head of investigations at the League Against Cruel Sports, agrees. His staff spend much of their time covertly recording hunts, though he cannot say how many have been referred to the police because it would compromise their work. Still, he says: “Hunts are breaking the law quite regularly. As far as we can tell, when hunts think they are not being watched, they get on as they always have done.”

Most who engage in illegal fox-hunting are apparently not punished, which is of course why the tradition continues.

Below is a video of an illegal hunt filmed in 2012, well after the ban was enacted. Watch as these horrible, evil toffs are enjoying the sight of their dogs cornering a fox.  Fortunately, a brave and stalwart British woman runs in at the last moment, drives away the dogs, picks up the fox, and runs away with it. As she does so, the hunters cry, “Leave it!” They want to see its death. I hope the fox was okay.

Click on the video to see her act of bravery and defiance (actually, it’s the hunters who are defying the law), or go to The Dodo, which has a longer piece on this incident and a copy of the video at bottom. 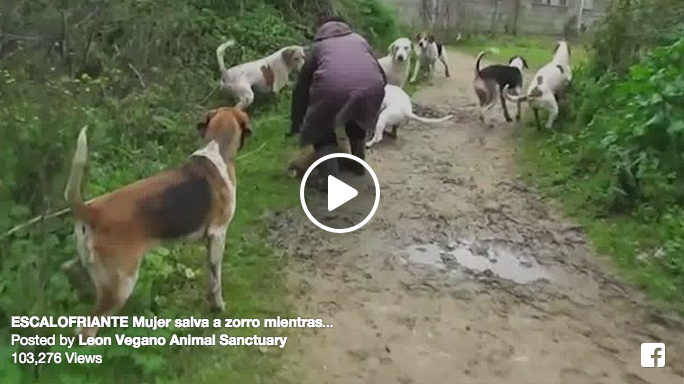 If you want to do something, even if it seems ineffectual, there’s a petition to Prime Minister David Cameron that you can sign, demanding that this practice be stopped for good via enforcement of the law. By filling in the boxes (name and email only) at the upper right, you’ll be affixing your name to this letter:

As an animal lover, I must turn your attention to the issue of fox hunting. This sport, which has deeply embedded itself into British tradition, has been deemed by many to be brutal and inhumane. Foxes are not being killed because they are pests, but simply because many hunters enjoy the thrill of the hunt.

While a ban exists on fox hunting, it is not heavily enforced. Hunters are still able to kill foxes without receiving punishment. I beg you to enforce this law. Humans should be willing to share their living space with animals, not kill them needlessly.

I’ve already signed it, and I hope many readers will, too. You can share it on Facebook, which I’ve done as well.

h/t: A tw**t from Ricky Gervais via Randy via Matthew Cobb