Now I’m the last person to totally discredit someone’s opinions about science merely because they don’t have degrees in science, but I have to say that Marshall’s new book, Evolution 2.0: Breaking the Deadlock Between Darwin and Design, looks pretty dire. Although I haven’t read it, its description sounds as if the guy really doesn’t have any idea what modern evolutionary biology says. First, he does have a degree in engineering, though, as we know, even if we consider engineers “scientists,” their profession harbors a disturbing number of anti-evolutionists. 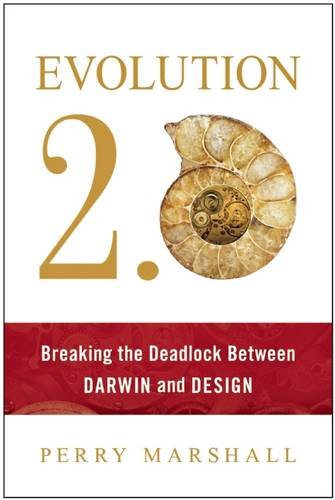 Marshall has also described himself as a devout Christian, and has given a talk on his “Eureka moment” when he suddenly realized that evolutionary biology is, in general, bunk. He also feels that Intelligent Design has its problems (i.e. he thinks evolution really happened, though some IDers agree, though his view, as described in the talk, puts him far closer to IDers than to evolutionists.  It also puts him close to quasi-ID scientists like my Chicago colleague Jim Shapiro, who finds fault with evolution based on putative “self-directing” processes of mutation and evolution.

Here’s the Amazon description of Evolution 2.0. Virtually ever statement (indented) is wrong or misleading, and I’ve added my comments (flush left):

150 Years Later, the Debate on Evolution Still Rages. Both Sides Are Half-Right. And Both Are Wrong.

Meet the opponents:
In one corner – Proponents of Intelligent Design like William Dembski, Stephen Meyer, and Michael Behe. Many defy scientific consensus, maintaining evolution is a fraud. They challenge decades of data in several branches of science: biology, chemistry, genetics and paleontology.

In the other corner – Devout Neo-Darwinists like Richard Dawkins, Daniel Dennett, and Jerry Coyne, who insist evolution happens by blind random accident. Interestingly, their books omit the latest science, glossing over crucial questions and fascinating details.   But what if both sides are half-right?

Dan Dennett, while evolution-friendly, is actually a philosopher. But leaving that aside, NONE of us maintain that “evolution happens by blind random accident.” That’s the biggest misunderstanding about evolution, and one zealously promoted by creationists and their city cousins IDers.  Mutations are “blind accidents” but it’s the disposition of those accidental variants by natural selection that leads to adaptive evolution.

What if both sides are missing something important, clinging on to outdated views, theories, and interpretations?

There is a third way. Evolution 2.0 reveals scientific experiments which prove that, while evolution is not a hoax, neither is it random nor accidental. Changes are targeted, adaptive, and aware.

Of course evolutionary changes are generally adaptive, because the process is largely promoted by natural selection. Deleterious genetic variants don’t survive. But mutations, so far as we know are random—in the sense that the chance a mutation will be useful doesn’t change depending on the environment in which it occurs. As my colleague Paul Sniegowski likes to say, mutations are “indifferent.” And as far as mutations being “aware,” well that’s just Chopra-esque caca de vaca.

-Nearly every cell in your body can edit its own DNA, negating random destructive copying errors, charting a path for its transformation (page 82)

Yes, that can happen, for cells have an exquisitively evolved mechanism to edit flaws in DNA (that mechanism, of course, got here via natural selection, since those individuals that could correct the largely deleterious errors in DNA would have more fit offspring).  But those mechanisms aren’t 100% effective. In fact, if they were, evolution couldn’t occur! But DNA editing says nothing about the nonrandomness of mutations; it says only that cells can sometimes detect DNA errors and fix them.

-Genes – far from being set in stone – actually change and adapt to the environment.

Yes, that’s called “natural selection.” But if by this Marshall means that genes can adapt to the environment in real time, changing in a way that’s both inherited and permanent, then he’s wrong. The adaptive “epigenetic” changes in DNA methylation that we see are always coded for by other bits of the DNA itself.

This refers to plasmids: free-floating bits of DNA in bacteria that can code for antibiotic resistance (though resistance often resides on the bacterial chromosome itself). When a bacterium happens to absorb a plasmid from another one, and that plasmid contains mutations conferring antibiotic resistance, then that individual leaves more copies of its “plasmid genes,” which, like most DNA, replicates and is passed into offspring. But this is nothing other than garden-variety natural selection, with the selected genes residing on extra-chromosomal but inherited pieces of DNA. To describe this as “germs re-engineering their  genetic destiny in real time” implies some teleological force, or conscious intent, that is deeply misleading.

-How bacteria communicate, organize themselves into armies, then stage coordinated attacks on your immune system (page 110)

Well, I’d have to see that for myself, but the species are no doubt microbes, and their “speciation” based on adaptation to new habitats.  If Marshall new anything about speciation, he’d realize that the concept of species in largely asexual organisms is dubious, and because of that you can, depending on what you call a species, say that speciation happens almost any time a new mutation occurs.

-Why DNA, which is digital instructions for building proteins, is not merely like code but is code, the same way as the software on your smartphone is (page 38)

-How cells switch genes on and off in response to the environment, then activate new traits that get passed from parents to kids (page 115)

Gene regulation was known since the days of Jacob and Monod, and we have a good idea of how it works, and what environmental cues (sugars, in the case of J&M) can activate genes. Again, gene regulation evolved via natural selection.  As far as passing newly activated genes from parents to offspring, that depends on whether the environmental cue that activates those genes persists from one generation to the next. If it doesn’t, the gene reverts to its quiescent state.

-Many more amazing, scientifically verified facts that not only further technology and medicine, but fuel our sense of wonder at life itself.

I can’t wait to hear them!

You will discover fascinating real-time evolutionary lab experiments by an eminent scientist in the 1940s, whose work was recognized in 1983 by a Nobel prize & US postage stamp, but then… is still rarely mentioned in school science curricula.

This refers to the work of Barbara McClintock, who won the prize for discovering mobile genetic elements (often called “transposons”) in corn. This was a stunning and Nobel-worthy discovery, but again it’s the discovery of an unanticipated way that DNA can change—by moving within a genome. Move along, folks; nothing to see here.

That’s just bunk. Scientists love to debunk each other.

Finally, get a load of the Big Message, and a Big Prize that, of course, nobody can win. Offering prizes for supporting evolution, adjudicated by a panel of evolution critics or denialists, is a tactic familiar to those who deal with creationists. And trying to win it is a mug’s game.

This book explores 70+ years of under-reported evolutionary science. Evolution 2.0 chronicles bestselling author Perry Marshall’s 10-year journey of in-depth research. As an Electrical Engineer, author of an Ethernet book and now world-renowned business consultant, Mr. Marshall connects the dots in a way that is new and refreshing. He tackles some of the biggest questions about evolution with precision and specificity, making it clear when the information is supported by hard data and when it can only be inferred.

This book will open your eyes and transform your thinking about life, evolution, and creation. You’ll gain a deeper appreciation for our place in the universe. You’ll the see the world around you as you’ve never seen it before: adaptive, efficient, and incredibly elegant.

$3 Million Technology Prize:Origin of Information is one of the central problems in modern biology. No one knows where the genetic code came from; no one knows how the first cell developed. To solve this, the author has organized a Private Equity Investment group which is offering prize, reminiscent of the X-Prize, for a natural process that produces coded information. The prize amount is $3 million USD as of August 2015. Details in Chapter 23 and Appendix 4.

I was struck by the Amazon reviews, with nine of the 16 five-star reviews posted on August 14, and five of the rest appearing within a few days (the book came out September 1). That’s deeply suspicious, as the writer of the only negative review noted: 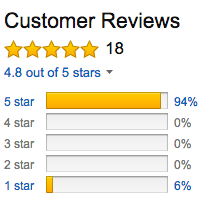 There is one new five-star review that was posted yesterday, with the reviewer lauding the book this way:

“I wanted to thank Perry for this contribution. Whether he knows it or not, his work is very Catholic. It carries the spirit of the Catholic Intellectual Tradition that holds no division or conflict between faith and reason.”

UPDATE: Reader Barry adds a link and a note:

A podcast with… Perry Marshall!

If you want a laugh (or a groan), jump to 3:20, where McCarthy [Ken McCarthy, the deeply ignorant host][ mentions the lunacy of a “hot bath of chemicals” that gave us giraffes. I can’t bring myself to listen to the entire thing.

[JAC: Marshall is the recipient of the 2015 Ornette Coleman Memorial Prize for Original Thinking in Science. Although I don’t know what the great saxophonist had to do with science, but if he knew anything about evolution, he’d be rolling in his grave.]

91 thoughts on “An author jumps the shark on evolution”